Next post
Bush, Obama, Iraq, and The Blame Game

by Donna Miller in Headlines 11 Comments

The saga of Lois Lerner and her disgraceful conduct at the IRS continued this past week. In the months since her departure as head honcho, the IRS agreed to hand over all of Lerner’s emails from 2009 to 2011 to the House Ways and Means Committee which has been investigating the actions of Lerner and other officials at the federal agency. It would not have been surprising if the IRS handed over stacks of redacted emails in the Lerner case. After all, tampering with documents is a trademark of the Obama administration.

For example, last year the Justice Department, under Eric Holder’s leadership, produced a completely redacted memorandum when it was ordered to turn over documents in response to a Freedom of Information Act (FOIA) request from the ACLU seeking insight into the Obama administration’s policy on intercepting text messages from cell phones. The entire 15-page document was blacked out, with only the heading left intact.

Complete redaction of subpoenaed documents is not a new trick for Obamabots. Several years before the Justice Department’s stunt the three liberal members of the Federal Election Commission (FEC) pulled a similar redaction stunt,. against the wishes of the three conservative members of the Commission. Someone, at the direction of the liberal members, redacted a mysterious document known only as the “first First General Counsel’s Report.” Because this document was redacted, no one outside the FEC knows what was in the report. 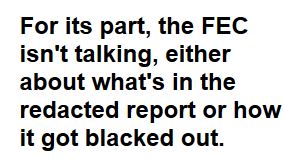 Indeed, the FEC is not saying what was in it since it possibly would reveal information that could expose ways for political action committees to get around federal election laws. This redacted document ended up backfiring on the Democrats in their case against Crossroads GPS, a nonprofit organization affiliated with Karl Rove that spent tens of millions of dollars on campaign advertisements leading up to the 2012 election.

Redaction isn’t the only trick up the sleeve of Obama’s suits when it comes to documents and discovery. In another instance, the Administration created a document out of nothing. Who can forget the birth certificate that did not exist until Jerome Corsi’s book threatened to expose the truth about Obama’s birth? After years of stalling and mocking, Obama suddenly saw the light, and produced a document that he professed to be his Hawaiian birth certificate.

Reputable computer specialists who viewed the document that the Administration posted online as Obama’s birth certificate stated unequivocally that the document was a forgery. But nothing has been done about it, and it is likely nothing ever will. The former and current governors of Hawaii have covered for Obama, and to this day no official long-form birth certificate has ever been produced.

So, with all these document deception tactics in their arsenal, I fully expected the IRS to produce redacted emails and claim that sensitive and critical information had to be redacted. Instead, on Friday afternoon, the Administration came up with a new stall tactic – the First Dog ate the emails.

Well, not really. But the excuse that they did come up with was just as absurd as the dog-ate-my-homework excuse. The IRS claims it cannot produce Lerner’s emails because the computer crashed. According to the Daily Caller,

It is quite possible that the people sent by the IRS to retrieve the Lerner emails were the same hopelessly inept ones who built the healthcare.gov website. Or maybe those retrievers used a computer program with the same aptitude that former Secretary of the Treasury Timothy Geitner had with Turbo Tax.

Whatever caused the IRS computer to crash, it supposedly took with all of Lerner’s emails from 2009-2011. Naturally, those are the critical years that coincide with the Administration’s fascist suppression of conservative groups seeking tax-exempt status. The Administration’s response to the suddenly unavailable information? How unfortunate. So sad, too bad.

If a student tried to get away with the antics that this administration has utilized when it comes to turning in homework, it would be comical fodder for a movie like the classic Ferris Bueller’s Day Off. Imagine the dialogue that the script would contain.

The Redaction Defense
Teacher: “Bueller, why is this report full of black pages?”
Bueller: “You see, Sir, the information was so important and potentially devastating that it had to be redacted before I could turn it in. It’s for your your own good, Sir. Trust me.” 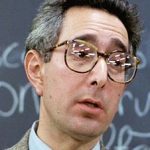 The Official Report Defense
Teacher: “Bueller, why is this report in a PDF format made of layer after layer of lines that can be separated? This is not a single report but a bunch of images laid one over top of another.”
Bueller: “No it’s not. It’s an official report. You are just a Birther and a racist trying to bring me down because I am a minority . . . Wait, no I’m not. I’m a white male from a wealthy Anglo-Saxon Protestant family. Well, it’s an official report anyway. Trust me.”

Teacher: “Bueller, where is your report on computer forensics that was due today?”
Bueller: “My computer crashed last year so I couldn’t finish it. It was good though. Trust me.”

You get the picture.

So I have a few more questions for Lois Lerner, which we know she will never answer since she plead the Fifth and has clammed up tighter than the head of the Hawaiian Bureau of Vital Statistics .

First: If your computer crashed and all email records were lost between 2010 and 2011, how did the IRS under your leadership manage to send a million pages (1,000,000 pages) of documents–as evidenced by EMAILS FROM YOU –to the FBI on 11 disks? Especially since your computer supposedly crashed and all those emails were lost. And why did those disks contain confidential information that the IRS was not supposed to reveal about conservative groups seeking tax-exempt status? Shouldn’t someone  someone be held accountable for these transgressions?

And my final question for Lois Lerner and the IRS is this: If my computer crashes before April 15, 2015, can I be absolved from having to pay my taxes next year?