Liberty Fight Club: Who is “The Freedom Caucus?”

Liberty Fight Club: Who is “The Freedom Caucus?” 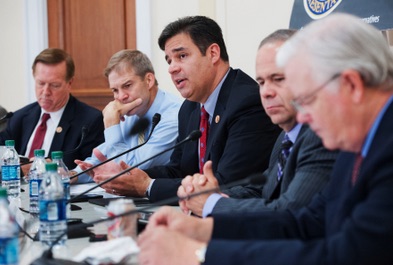 The House Freedom Caucus has been credited, and blamed, for the unexpected resignation of John Boehner, a welcome departure reflecting the voices of upwards of sixty percent of GOP voters fed up with his lackluster leadership, and his unwillingness to listen to a large segment of Republican voters. After winning both houses of Congress last November, we’ve seen not one campaign promise fulfilled, and instead have seen more power ceded to the Executive Branch, and historic levels of debt, just for starters. So who are the members of the Freedom Caucus, and what is their goal?

Credited with launching the movement to oust Speaker Boehner by filing a motion to “vacate the chair” in July, congressman and caucus founding member, Mark Meadows of North Carolina, offers the group’s mission statement on his official website:

“The House Freedom Caucus gives a voice to countless Americans who feel that Washington does not represent them. We support open, accountable and limited government, the Constitution and the rule of law, and policies that promote the liberty, safety, and prosperity of all Americans.”

And Meadows briefly outlines the focus of the caucus:

Conservative House Members announced on Monday [January 26, 2015] the formation of the House Freedom Caucus (HFC), which will focus on advancing an agenda of limited, constitutional government. “The HFC will work to provide a unified conservative voice in the House Republican Conference. I look forward to working with leadership to make the concerns of conservatives known as we work together to advance a pro-growth, limited government agenda in the House,” Congressman Mark Meadows said.

The HFC has been labeled by some as the Freedom “Fight Club.” Why? Well, refer to rules one and two of Fight Club. Matt Fuller of Roll Call explains:

There is no official roster. Leaders of the hard-line conservative group won’t say exactly how many members are in the caucus, which has already made its mark. The last count, based on conversations with members who are trying to keep track, was 42, but members are being added almost every week; CQ Roll Call has observed 38 attend at least one caucus meeting.

Except that’s not exactly true. One member, who spoke on condition of anonymity to discuss the classified rules, says the caucus believes keeping GOP leaders in the dark could be an advantage as it stakes out its next moves. And while the group’s chairman, Jim Jordan of Ohio, has reportedly been keeping in close contact with Republican leaders, the HFC is still largely a mystery. Here’s what we know: There are nine founders of the group, and three full-time aides. Members can say they are members, but may not refer to others’ status. It takes 80 percent to take a formal position. There is a meeting after the House’s first votes of the week, with no set location although members have taken a liking to the basement of Tortilla Coast, a Capitol Hill bar.

I would note that “hard-line conservative” is often misspeak for “constitutional conservative.” Just my two.

Though it’s lost several fights thus far—including the battle to end what many view as overt crony capitalism in the Ex-Im—with the help of grassroots Republicans, HFC’s push to oust Speaker Boehner is, for now, successful. Several HFC members had this to say following Boehner’s resignation announcement last week:

Rep. Meadows, as early as this morning, praised Rep. Paul Ryan as a competent leader during a Fox News interview, suggesting support for Ryan should he elect to jump in to the race for the speakership:

The caucus does have its critics, including from former members, one of whom resigned after yesterday’s McCarthy implosion, Rep. Reid Ribble:

“I was a member of the Freedom Caucus in the very beginning because we were focused on making process reforms to get every Member’s voice heard and advance conservative policy,” Ribble said in a statement provided to CQ Roll Call. “When the Speaker resigned and they pivoted to focusing on the leadership race, I withdrew.”

“When the House Freedom Caucus formed in January, I fervently hoped that it would provide responsible and effective leadership to advance conservative principles in the House of Representatives.”

“I know that every member of the HFC sincerely supports these principles, but as I have expressed on many occasions during our meetings, I believe the tactics the HFC has employed have repeatedly undermined the House’s ability to advance them.”

You can read his entire letter to Rep. Jordan here.

Still, the HFC’s sphere of influence cannot be denied. And bringing a voice to those of us who’ve felt silenced during Boehner’s tenure welcome that.

“Our real discoveries come from chaos, from going to the place that looks wrong and stupid and foolish.”

This country was founded on a heavy dose of rebellion. Had our Founders and brave men and women given in to the demands of the British Crown, this nation would look a whole lot differently today. I’m proud to say my own House rep, Raul Labrador, is a member of the Freedom Caucus, and fights against the progressive agenda pushed by both parties, and for our freedoms every day, good, bad, or ugly. While some may disagree with their tactics—and some of the criticisms are fair—change is often chaotic, and often necessary, to shake up the status quo. Just ask Kevin McCarthy. Anything worth fighting for typically is.