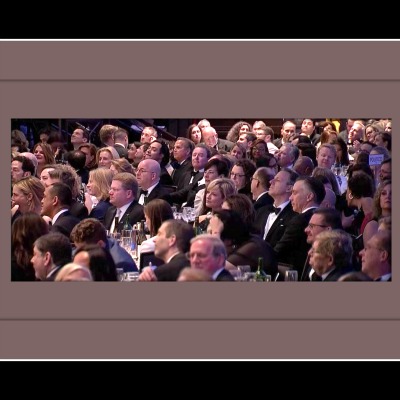 Previous post
Dear Liberal Media FYI We Hate You Too 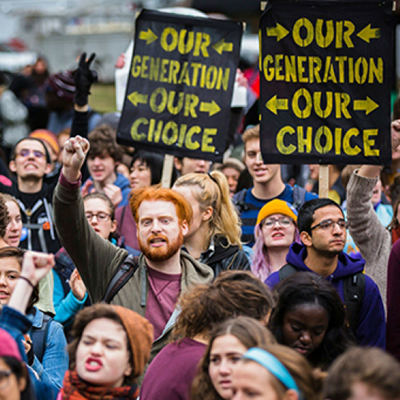 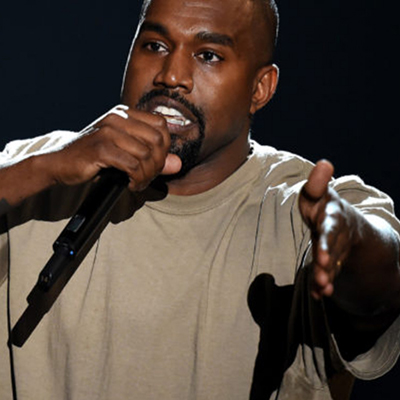 The Left despises truth. From their mythical tale about the “Southern Strategy,” to their attempts at erasing history while channeling the Taliban, they’ve spent decades trying to bury, or project onto the Republican Party, their racist history. 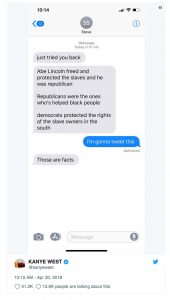 Of course, the usual suspects—who’d prefer Kanye get his truth-spewing rear back to the liberal plantation STAT—collectively convulsed all over social media, because…well, the truth hurts:

Uh…you might want to re-take an American History course, ladies.

Tell your man yes the southern Dixiecrats WERE racist, BUT in 1964 LBJ signed the civil rights act and they left Dems to become southern base of the GOP, fact. Look up Nixon’s “southern strategy” Ye the Dodgers used to play in Brooklyn too,they’re not the same team playing I. LA

Um, no, Mr. Carter. Here’s a primer on the DNC’s fictitious “Southern Strategy:”

Then Kanye tweeted this, sent to him by a “concerned” friend, aka John Legend: 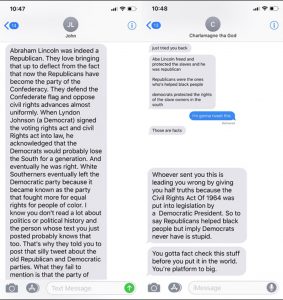 The Civil Rights Act was actually supported and pushed primarily by Republicans in Congress. It was members of the Democratic Party that actually filibustered the bill in Congress, deliberately stalling it from a vote. Johnson, a known racist Democrat, signed because he had to.

Bingo. Here’s the truth about the 1964 Civil Rights Act:

Still, despite his record and rhetoric, LBJ fought hard to pass the Civil Rights Act of 1964. But those he had to fight against were Democrats, not Republicans. Democrats like former Klansman Senator Robert C. Byrd and others launched a filibuster to kill the Civil Rights bill. The chances of stopping them seemed bleak. Never in the history of the United States Senate had members mustered enough votes to stop a filibuster (a procedure known as “cloture” that requires 67 votes to invoke) on a civil rights bill.

So the Republican Minority Leader Everett Dirksen set out to get the votes necessary to defeat the filibuster. On June 9, 1964, the night before the historic cloture vote, the 68 year old Republican stayed up late into the night typing a speech on twelve sheets of Senate stationery that every American should know but that few do. The next day, Senator Everett Dirksen delivered his oration on the floor of the U.S. Senate just minutes before the final vote. The final tally: 71 to 29, with 27 of the 33 Republicans voting to defeat the Democrat-led filibuster.

Democratic Majority Leader Mike Mansfield said, “This is his [Dirksen] finest hour. The Senate, the whole country is in debt to the Senator from Illinois.” And two days after Dirksen’s speech, Roy Wilkins of the NAACP wrote Dirksen a contrite letter apologizing for their early attacks. “The National Association for the Advancement of Colored People sends its thanks to you for your vote for cloture and for your final speech before the vote,” Wilkins wrote. “Your leadership of the Republican Party in the Senate at this turning point will become a significant part of the history of this century.”

And the truth of the Republican Party’s long history of fighting FOR civil rights:

Indeed, the closer one looks across the arc of black history, the more ironic it seems that voters would associate civil rights with the Democratic Party. Founded as the anti-slavery party, the Republican Party was responsible for winning passage of the 13th, 14th, and 15th Amendments, the Ku Klux Klan Act of 1871, the Reconstruction Acts, and the 1866, 1875, 1957 and 1960 Civil Rights Acts. In fact, had Democrats not overturned the 1875 Civil Rights Act, the strikingly similar 1964 Civil Rights Act might never have been necessary.

He’s trying to rid the negative stigma the party currently has. He feels the Democratic Party is blindly leading it’s Black supporters. I think he’s trying to even them out with their unbias truths so he can run as an independent in 6 years

Well, he is pretty adept at self-promotion.

But is that a bad thing? Not necessarily. After all, we have a president who made his way to the highest office in the land the very same way: with a colossal megaphone, and knowing how to use it, people listened. And that’s what the Left is afraid of.

The Democrat Party has worked for decades on a full-throated effort to bury their racist history. Then along comes a pop culture icon and spews it all over the interwebz for the world to see. While Kanye has always been an odd bird—he’s had his share of meltdowns, which the Left is exploiting to paint him as “crazy” in an effort to silence him—he doesn’t carry water for the DNC as so many of his fellow entertainers do. Yes, he’s all over the map, and I disagree vehemently with some of the positions he’s taken. But that’s what free-thinkers do: they consider various viewpoints, and pick and choose the ones in which they find truth. And Kanye West just told the Ugly Truth about the Democrat Party. And he’s got a substantial microphone and, like with President Trump, no one has the power to switch it off. That scares the living daylights out of the DNC. Why? Because black voters—a near monolithic DNC voting bloc—shifting away from the Democrat party by just a few percentage points could place the Democrats out of power indefinitely. Couple that with millennials veering toward the GOP on economic issues, and the DNC has itself a tsunami that’s threatening to maim The Party of Racism™ irreparably. The question is: will Kanye and other prominent black and millennial voices rise above the continuous untruths the Left is so very good at disseminating, and move voters of color away from the party that’s exploited them for so long? Time will tell. But it feels like a shift, even if only an elfin one. And as we all know, revolutions have started with less. Here’s hoping they choose the red pill.