Previous post
"Change Has Come to America"...In the Form of a Tyrannical Obama Regime

by Catherine Wilkinson in Headlines 11 Comments

On this heartbreaking day, with the sun shining on unbelievable destruction and unimaginable sorrow, we are yet again confronted with the most vile behavior from those who want all conservatives and Christians  completely marginalized – at best.  And wish conservative homes destroyed, possessions gone – and killed…at worst.   Just ask them.  Seriously…ask them.  Ask a big, mouthy, progressive liberal what THEY think is the “solution” to conservatives.   Given what I’ve read over that last 24 hours, it’s chilling.

This woman is a smug, snarky, elitist ultra-leftist media-prog which translates into “an idiot”.  I have long watched and read about this kind of heinous behavior….  I’m used to it and expect it.  Most of the time, it is necessary to ignore it.  Not now.  Her apology was fake, forced and ONLY given when the backlash was too intense and her hate and disdain was too exposed….but mostly it was given because she realized even her supposed joke couldn’t transcend two grade schools destroyed.  I guarantee she and others are not sorry or have the slightest bit of remorse.  Well, remorse for having to apologize, but that’s it.  I have read the comments from her “supporters”….they are as bad, if not worse, then her first tweet and her “apology”.  God have mercy on their souls….if they have them. 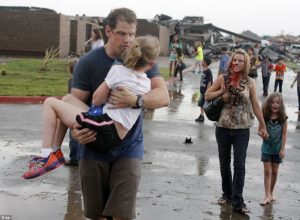 What sort of person thinks tornadoes “clearly targets conservatives”…even as a “joke”?  A person who has forfeited all sense of compassionate and human dignity in the pursuit of political power.  What sort of political party and idealogy thinks wishing harm and mayhem on people that aren’t as cool and progressive as they are is okie dokie because these people are conservative and “deserve it“?  A political party that has deeper moral problems than a liberal mouthpiece getting busted on Twitter writing a horrendous death wish for conservatives in icky flyover country.

And here we have another gem…..sympathy for “foreclosure” homeless.  Yes, let’s not forget to blame capitalism and the heartless bastards who gave loans to those who could not pay them back.  Let’s make sure they are included in phoney empathy for families who lost everything including their children.  NEVER LET A CRISIS GO TO WASTE.  Use anything…anything at all to continue to blame and hate conservatives.

And speaking of a crisis….the broken homes barely had enough time to settle back down to earth before conservatives were blamed for…yes, of course….climate change.  And tornadoes. Never mind that there is no correlation…at all.   Don’t wait until the bodies are counted….blame conservatives as fast as you can.  Act self-righteous and indignant and hope to hell it sticks somewhere in the welfare and entitlement muddled mind of some low-information voter.

“Warming trends do create more of the fuel that tornadoes require, such as moisture, but they also deprive tornadoes of another essential ingredient: wind shear. There really is no scientific consensus or connection between global warming and tornadic activity.”

So…you can see what liberals are REALLY about.   Oklahoman’s happen to live in a predominately conservative state.  Thus….they must suffer.

If this had happened, say….in San Francisco….I bet we’d see a different Tweet from Lizz.

Now back to Lizz Winstead.  Given her beliefs on abortion, why would she have any compassion for families who have lost their little ones?  Hey, they are just late trimester conservative mistakes.

I doubt the grieving families in Oklahoma have given any thought to the ugliness that is Lizz Winstead.  Instead of placing blame on liberals or conservatives….or even God…they are trying to cope with the most horrible event they will ever experience. Because I believe in a loving, forgiving God, I will try to muster a prayer for the liberals that wish death and destruction on conservatives.  I don’t know if I’ll succeed, but there is goodness in even trying.  I want to be good and never lose my compassion for ANY person who experiences such loss and sorrow.

Last night, on the news, there was a phone interview with a man who lost his home and all possessions, but his wife and three children were safe, waiting for him in his street.  He was in shock, but grateful.  He paused and said he “knew” that God would grace him with the strength to carry on.  He thanked those who had offered help and asked for God’s mercy for those who had lost much more than him.  You will never hear that from a hard-core liberal.  Never.  They will always politicalize tragedy to suit their agendas.  Always.

Lizz Winstead should be deeply and profoundly ashamed.  All liberals (and conservatives) that think and act out in public like this should be ashamed.  I don’t have a lot of hope for that.  The liberal mindset is such that any loss to conservatives is a good thing…regardless if it’s a vote….or a life.