Previous post
Landlords Have Rights During Economic Stress Too 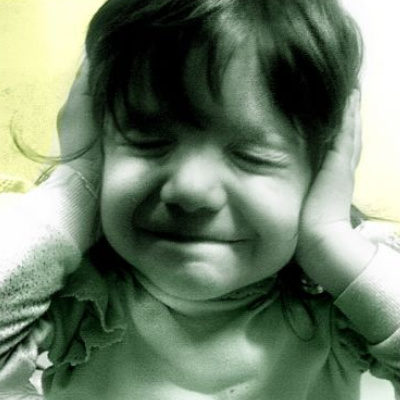 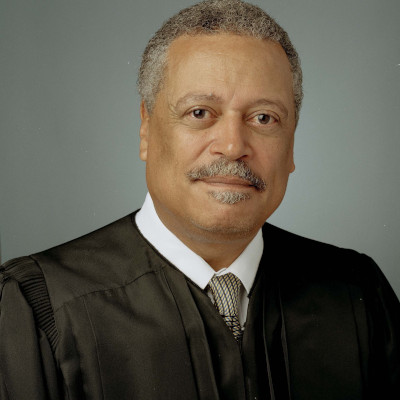 Welcome to the Michael Flynn merry-go-round. Several years ago, we heard how the Flynn case would help prove President Trump conspired with the Russians. However, what we’ve learned lately is the judicial process was manipulated and still the Feds managed to botch the case to such an extent Attorney General Barr dismissed the charges against him. There’s evidence that Peter Strzok manipulated the investigation, keeping it going even after others in the FBI concluded there was not enough evidence to charge Flynn. Then the prosecution failed to hand over exculpatory evidence. Yet Flynn’s former attorneys advised him his only hope to keep from going to prison was to plead guilty. Now, even though the Department of Justice has filed to dismiss the charges against him, the judge in the case has delayed ruling to allow interested parties the chance to file “friend of the court” briefs. And, yes, this is the same judge who asked the prosecutors during the sentencing phase if Flynn could be charged with treason.

From the beginning, something has felt wrong about the case against Flynn. Whether you believe he lied to the FBI as charged or not, the misconduct by the FBI and by the Justice Department’s prosecutors tainted the case to the extent that his guilty plea should not stand.

U.S. District Judge Emmet G. Sullivan is a Clinton appointee. According to that bastion of leftist journalism, the Washington Post, he has a “national reputation for advocating defendants’ rights to full government disclosure of evidence.” Yet, he seems to stand for the exact opposite in this case.

Here is the docket entry from Sullivan. 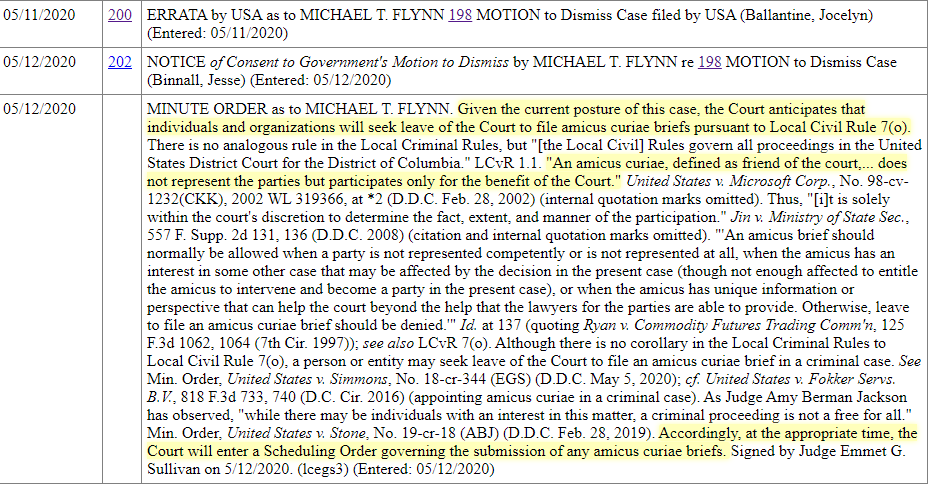 The highlighted parts say it all.

In his carefully selected definition of what an amicus brief is, Sullivan notes that the “friend of the court” doesn’t represent the parties but “participates only for the benefit of the Court.” Hmm. Why does a seasoned federal judge need help in determining if justice would be served by accepting the prosecution’s motion to dismiss in the face of evidence of prosecutorial misconduct, misconduct on the part of the investigating agents and possibly even ineffective defense counsel?

Before that quote, Sullivan wrote that he anticipates third parties will want to file briefs in the case. They “may” want to file. Sounds like he hopes they will, doesn’t it. Oh, and let’s not forget he has used much of this same reasoning in the Roger Stone case. Are we seeing a pattern here?  Judge Powell apparently doesn’t like it when the prosecution admits it screwed up and charges against a Trump supporter should be dismissed.

So much for being a supporter of defendants’ rights.

From the record: “An amicus brief should normally be allowed when a party is not represented competently, or is not represented at all.” Flynn is represented and there is no question that his current counsel is more than competently handling his case. In fact, she has argued for some time to convince the judge and the prosecution that her client should be allowed to withdraw his guilty plea. The fact the Department of Justice filed to dismiss the case would seem to imply she did her job.

[W]hen the amicus has an interest in some other case that may be affected by the in the present case. . . .”

That would be the Justice Department, wouldn’t it? And it wouldn’t qualify as an amicus because it is a party to the case. Who else could it be? Roger Stone? Other Trump supporters or former members of his staff who have been prosecuted by Justice? Somehow, I have a hard time thinking those are the ones Judge Sullivan is hoping will file a brief.

[O]r when the amicus has unique information or perspective that can help the court beyond the help the lawyers for the parties are able to provide.”

How can anyone not a party help in this situation? We aren’t talking about an issue where specific knowledge is needed to understand the facts before the court. This is a cut and dry situation where the Attorney General filed to dismiss charges against Flynn in the interest of justice because the investigators and prosecutors involved in the case broke the rules.

Something else to consider. According to Flynn’s attorney, Sidney Powell, there has already been at least one notice of intent to file an amicus brief submitted. This occurred prior to the court’s decision. It is also, again allegedly, from a group calling itself “Watergate Prosecutors”. Gee, that doesn’t sound like it will be in support of Flynn, does it?

Powell goes on to say, ““This Court has consistently — on twenty-four (24) previous occasions — summarily refused to permit any third party to inject themselves or their views into this case.”

So why suddenly decide that this is the right time to allow amicus briefs? Could it be because Powell is on a fishing trip to find any reason, no matter how reasonable, to deny the motion to dismiss?

Judge Sullivan, who denied leave to file amicus briefs when he knew third parties would have spoken favorably of Flynn, now solicits briefs critical of Flynn. This is a violation of the judicial oath and applicable ethical rules. We will be filing a complaint against Sullivan.

It has been clear since the moment when Sullivan asked the prosecution “whether they had considered charging Flynn with treason” that he was biased against Flynn. Add that to the actions by the FBI and by members of the Department of Justice and you have the perfect storm for overturning a conviction. Because Flynn plead guilty, that made things a bit more difficult for him when the misdeeds began coming to light. But, with AG Barr dismissing the charges against him, this court has decided to throw up roadblocks in an attempt to subvert justice.

Flynn may be many things but, just like anyone else in this country, he is guaranteed a fair trial. He did not get one. There were members of the Department of Justice who conspired against him to deny him his rights. That cannot be allowed to stand. Like the man or not, believe him guilty or not, his rights were violated and he should be afforded the same protections and remedies as anyone else, no matter what their crime or what their station in life.

It saddens me, even if it doesn’t surprise me, to see certain members of our judiciary twisting the law to fit their political agendas. For a jurist who supposedly advocates for defendants’ rights, Powell has stepped far away from that goal with the Flynn case. It is hard not to think his personal bias is driving his actions. Justice is supposed to be blind. Justice is supposed to be fair. Justice is not supposed to have one set of rules for Democrats and another for Republicans.

Perhaps it is time for Justice Sullivan to take a crash course on judicial ethics. Based on his actions in this case, it might just be too late. If so, we are all losers for it.