Next post
No, Husain Abdullah did not get Penalized for his Muslim Prayer

The House Oversight and Government Reform Committee plans a hearing Tuesday morning on the Secret Service security lapses that have recently plagued that agency. Secret Service Director Julia Pierson will be in the hot seat in what promises to be, at the very least, an uncomfortable chat with bipartisan members of Congress.

“President Obama appointed Pierson, 55, a 30-year Secret Service veteran, in March 2013. The first female director in the agency’s 148-history, she was given the mission of cleaning up the agency’s culture after the 2012 trip to Colombia in which up to a dozen agents were found to have hired prostitutes.

She has asked the committee to hold part of the hearing in a classified setting, behind closed doors. Divulging too much about security procedures at the White House would ‘arm’ would-be attackers with critical information, she said.”

We can expect the predictable, sycophantic Democrats *cough Elijah Cummings* to try and blame the most recent lapse in security—the White House lawn sprinter—on a lack of sufficient resources. To which Jason Chaffetz and Darrell Issa should immediately call b.s. Because it is being reported that personnel inside the White House requested that the “disruptive” alarm that was supposed to be securing the breached White House door be silenced.

“Chaffetz said he plans to ask Pierson how an alarm meant to alert officers to intruders could be silenced or turned down. The congressman said two people inside the agency told him that boxes were silenced because the White House usher staff, whose office is near the front door, complained they were noisy. A Secret Service official told The Post that the usher’s office was concerned the boxes were frequently malfunctioning and unnecessarily sounding off.

The alarm boxes, which officers call ‘crash boxes,’ are key pieces of the agency’s first-alert system, according to former agents and officials. If they spot an intruder, officers are trained to hit the large red button on the nearest box — sending an alert to every post on the complex about the location of an incursion and piping sound from that location to other boxes around the property.

‘If true, the fact that crash boxes were muted to avoid being ‘disruptive’ is not due to a lack of resources or an insufficient number of checkpoints or barriers,’ Chaffetz said.’”

There are reportedly over 1,000 instances of security breaches. Just a handful of the most recent embarrassing incidents involving the Secret Security include: 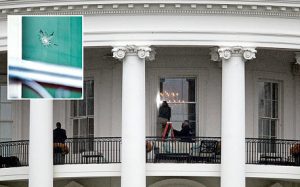 Imagine if the man—reportedly not stopped with lethal force because of an insistence on political correctness from the bureaucrats inside the Secret Service—had been donning an explosives-laden vest strapped to his chest. Some say that this incident is simply a personal security issue for Mr. Obama and his family. I disagree. We are being threatened by Al Qaeda, ISIS, and a host of other various terrorist organizations, not to mention lone wolves, determined to attack our homeland. So an unknown person breaching White House security is not just a personal security issue. It is a national security issue, too. It doesn’t really matter how far into the White House the undocumented dasher got. Because all ISIS cares about is that he got in, without swift resistance from Secret Service agents, confirming for them our lax security at all levels. And therein lies the clear and present danger of political correctness clouding both the security of the First Family, and the security of our nation. And ISIS is banking on us continuing that dangerous policy.

Will heads roll today? Or will there be zero accountability as with just about every other agency hanging like rotting carcasses around the neck of this bungling administration? Let the fireworks commence.

You can watch the hearing live today, Tuesday, September 30th at 10:00am EDT on C-SPAN. Or you can watch online here, live or recorded.

UPDATE [9/30 10:30 am] Revealed during Tuesday’s hearing: Secret Service Director Julia Pierson asked for staff reductions, after being given more funding than she asked for, and that that agency spent money on luxury suites while reducing staff. She appears to be trying to cover up, before Congress, what could have resulted in the assassination of a sitting American president, blaming staff reductions (and we now know SHE requested them, though at least one sycophantic Dem is trying to blame sequestration) including that serious shooting incident in 2011. She should be FIRED immediately.