Previous post
Obama, Warren, Biden, Kerry Clueless on How to Handle the Growing Threat of ISIS

So now the DOJ Civil Rights division is going to investigate the Ferguson Police Department. This in addition to the other investigation the DOJ is already running in Ferguson.

Holder’s decision will represent the Obama administration’s most aggressive step to address the Ferguson shooting, which set off days of often-violent clashes between police and demonstrators in the streets of the St. Louis suburb.
The federal officials said the probe will look not only at Ferguson but also at other police departments in St. Louis County. Some, like Ferguson, are predominantly white departments serving majority-African-American communities, and at least one department invited the Justice Department to look at its practices. The officials spoke on the condition of anonymity to discuss the pending inquiry.

The attorney general shared his own experiences of being singled out because he was black, including one incident in which he was stopped by police while going to watch a movie.
“At the time that he stopped me, I was a federal prosecutor. I wasn’t a kid,” he said, according to the transcript. “I worked at the United States Department of Justice. So I’ve confronted this myself.”

I’m quite certain that many folks in the Ferguson area are well aware of Holder’s remarks and won’t be shy about using it to further their own goals. Even though Holder has promised a “thorough and fair” investigation, that doesn’t mean thorough and fair have a basis in reality. Just look at the DOJ’s investigation of the New Black Panther intimidation case in Philadelphia. That certainly ended well didn’t it?  Of course it did.  They showed up in Ferguson for the rallies.

Activists in the Ferguson and St. Louis area certainly believe the investigation will go as directed.  As long as it is the direction that THEY want.

local activists, as well as members of the Ferguson community —instrumental in shaping the narrative in the wake of the shooting— were encouraged by news of the probe and consider it a battle won in what will likely be a protracted fight seeking justice for Mike Brown and other victims of police violence.
“Our Ferguson area community stood united in the face of injustice and brutal repression by police who were supposed to protect and serve us,” said Jamala Rogers, Co-Founder of The Organization For Black Struggle and Organizer with HandsUpUnited.

Lets not forget that Holder has directed a serious amount of resources to these investigations of the death of a less than stellar young man. And yet, where is the DOJ manpower we need to track the ISIS supporters who are and have been living in Minnesota?  Will the DOJ investigate all the rioters and looters who tore up Ferguson in August, with the damage costs to taxpayers already in the millions?  I doubt it.  Will Holder investigate the issues at the Nashville detention facility?  I doubt it.  Holder is much more interested in making grand speeches, writing editorials, hugging people, whining at Al Sharpton’s NAN conference, and doing his best to ignore pesky little items such as the Lois Lerner and Fast and Furious investigations. 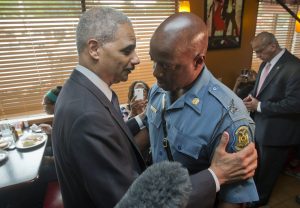