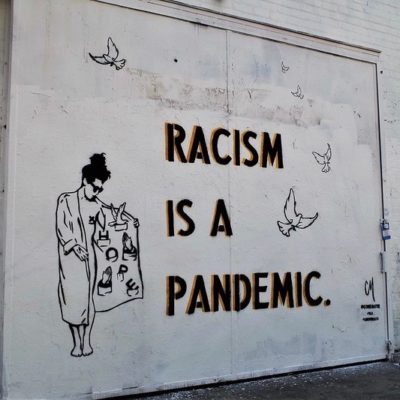 Ho is also the President of The Association for Asian American Studies. She begins her screed innocently enough discussing her credentials on why she is an expert on said topic of discussion:

As the current president of the Association for Asian American Studies and as an ethnic studies and critical race studies professor who specializes in Asian American culture, I wanted to address the climate of anti-Asian racism I was seeing at the start of the pandemic. So in April 2020, I created a PowerPoint slide deck about anti-Asian racism that my employer, the University of Colorado Boulder, turned into a website. That led to approximately 50 interviews, workshops, talks and panel presentations that I’ve done on anti-Asian racism, specifically in the time of COVID-19.”-Jennifer Ho

Read: Look at me, I am so important. There. I summed it up for you, Ms. Ho. Now that we got the point, Ho goes in for the kill:

The point I’ve made through all of those experiences is that anti-Asian racism has the same source as anti-Black racism: white supremacy. So when a Black person attacks an Asian person, the encounter is fueled perhaps by racism, but very specifically by white supremacy. White supremacy does not require a white person to perpetuate it.”-Jennifer Ho

Wait, what? So, according to Jennifer Ho, a professor after all, Black on Black racism, Asian on Asian racism, Black on Asian racism and Asian on Black racist attacks are all motivated by…you guessed it…white supremacy. Why? Because, as Ho blathers on, white supremacy is an ideology that is based in the thought process, “to be white is to be human and invested with inalienable universal rights and that to be not-white means you are less than human – a disposable object for others to abuse and misuse.”

Ho goes on to drive her point home citing the COVID-19 pandemic and “yellow peril” rhetoric in the United States.

This same rhetoric of blaming anyone perceived to be Chinese for COVID-19 and attacking them has been found in countless reports of harassment, including one by a Vietnamese American woman who was spat at by a white man as she tried to enter a grocery store in March 2021. Four days later, video footage showed a 76-year-old Chinese woman who was punched in the face by a 39-year-old white man, on the same day that a white man killed eight people, including six Asian women, in Atlanta.”-Jennifer Ho

The so-called “yellow peril” Ho refers to can be evidenced back in this article, which proclaims that attacks on the marginalized are not an exception, but the norm. Talk about stoking the flames of division. This is normal, folks. Everyone’s doing it.

First off, let’s just throw it out there. COVID-19 originated in China. Chinese Americans are not to blame but the Chinese government in China, is, and still should be held accountable. If this news causes an idiot to spit in the face of a person of Asian descent, who is not even Chinese but Vietnamese, then, yes, the man who spits in the face of a Vietnamese woman thinking she is “Chinese” and blaming her for the Coronavirus is a stupid, uneducated man. But to say all white people are to blame for a few token dumbasses, is also an uneducated, bigoted opinion. Take that, professor Ho.

I guess the Japanese are “racists”, too, when they blame the yellow dust from China that blows into regions of Japan right around cherry blossom time. For the longest time when I lived in Japan, I got sick right around the time the beloved sakura bloomed. It was strange because I never did get sick when the cherry blossoms bloomed before. Only in Japan. I thought it was the beautiful flowers. That is, until my friend Megumi told me that it was yellow dust blowing in from China. So, according to Ho’s warped ideology, we cannot place any blame on a country such as China for yellow dust or, dare I say, a global pandemic? And if we do, regardless of the racial background of those pointing fingers, it all goes back to one thing…

…white supremacy. All the fault of white people.

How about Hispanic-to-Asian violence? I guess that’s one group we haven’t covered. Still the fault of the white people in the delusional world according to Professor Jennifer Ho.

Understanding the depth and reach of this ideology of racism can be challenging, but doing so brings each person, and the nation as a whole, closer to addressing systemic inequity. It’s not Black people whom Asian Americans need to fear. It’s white supremacy.”-Jennifer Ho

So deep that we are completely incapable of understanding because we’re “simple folk”, right, Ms. Ho? The fact that Yahoo! News picked this article from The Conversation up is quite humorous, I might add.

I guess we can blame some white people for this fine mess we’re in. Yes, the white people making bank on these “diversity and inclusion” boards. The white educators legitimizing these dangerous thoughts. (Robin DiAngelo, you here?) The white people bankrolling this violence and chaos and destroying our cities. (A-hem, George Soros?) The commonality here? They go back to their white neighborhoods, their white country clubs and send their kids to white private schools that spew (very) white liberal ideas all while everyone else in America is at each others’ throats.

Gone are the days of Kim Kardashian breaking the Internet. The main source of information, for most of us, consists of virtue-signaling advertisements combined with biased news columns from self-proclaimed “unbiased journalists” (Democracy dies in the darkness, don’t you know) and deep, philosophical screeds from academics in higher education on Critical Race Theory and how to be a woke. These professors of higher education spew their thoughts to jobless white kids who want to be intellectually-conscious of the space they are taking up while majoring in their useless liberal arts degrees while a Vietnamese-American woman the very same age is doing double-duty as a nail tech in her sister’s salon (that was shut-down during COVID by the very white governor) while studying for and financing her pre-med classes at the university.

Ironic that The Conversation is mainly, for the likes of Ho and her intellectuals, a one-way conversation with no room for discussion or differences of opinion. Apparently, no one is paying attention to this trash that is being strewn about. In some cases, the dangerous thought brought about by these conversations is far worse and will do more long-term damage to us as Americans than a pandemic hailing from China.