Hillary Clinton has an email problem. No, her email wasn’t hacked. No, the email servers didn’t crash. It’s a wee bit different than that. You see, during her tenure as a federal employee where she was cleverly disguised as Secretary of State; Hillary used her email to correspond with lots of people. Well of course she did! They all use email to talk to each other! What’s the big deal?  Let me ask you, does this look like an assigned State department email address? 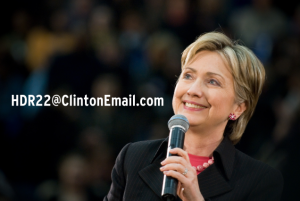 I thought not. First of all, why was a federal employee allowed to use her own email account? Michael J. Schmidt at the New York Times asked that very question:

WASHINGTON — Hillary Rodham Clinton exclusively used a personal email account to conduct government business as secretary of state, State Department officials said, and may have violated federal requirements that officials’ correspondence be retained as part of the agency’s record.
Mrs. Clinton did not have a government email address during her four-year tenure at the State Department. Her aides took no actions to have her personal emails preserved on department servers at the time, as required by the Federal Records Act.

Did you catch that? The entire FOUR years that Hillster served as Secretary of State, she used a personal email account for all her business. Not only that, but she set that email account up on a PRIVATE domain at her house. Phillip Bump at the Washington Post points out another little fact that could make a BIG difference to Hillary’s campaign:

Examining the registry information for “clintonemail.com” reveals that the domain was first created on Jan. 13, 2009 — one week before President Obama was sworn into office, and the same day that Clinton’s confirmation hearings began before the Senate.

Ruminate on that for a moment. She was that certain she was going to get confirmed, so certain that she took steps to create a super secret domain so she and several of her aides could “talk amongst themselves.” John Hindraker at Powerline points out that her choice of account name is kind of interesting:

There was no universal protocol for clintonemail.com addresses. Thus, for example, Anthony Weiner’s wife Huma Abedin used Huma@clintonemail.com. So Hillary’s choice of an email address was personal. And it is rather striking: her initials are HRC, for Hillary Rodham Clinton, right? So what does HDR stand for? Hillary’s middle name is Diane:

So HDR stands for Hillary Diane Rodham. At the moment when she had been nominated as Secretary of State, Hillary chose to declare her independence from Bill Clinton, her ticket to the big time, by dropping his name from the email address that she used for four years as a cabinet officer.

The media, usually in Hillary’s pocket, is having a difficult time wrapping their heads around this debacle.

First up, there was a visibly discombobulated Lawrence O’Donnell of MSNBC, whose concession there was “no conceivable, rational explanation” for Clinton’s actions, mixed with CNN’s Chris Cuomo saying the story “smells terrible,” and a variety of other incredulous reactions.
—
Matt Lauer of NBC News and former Obama press secretary Robert Gibbs, who slipped through that wonderful revolving door that allows Democratic mouthpieces to become mainstream-media commentators, commiserated about Hillary’s unpardonable sin of giving Republicans easy points to score against her — a “lay-up,” as Lauer put it.
“I think it’s much easier for critics to explain why they don’t exist than it might be for her to explain why she used her private email,” Gibbs agreed, although he still held out some thin hope that Team Clinton would be able to spin their way out of it.

.@HillaryClinton wants you to read and see her emails without the partisan filters. Can the media handle this one without the usual bias?

The White House counsel’s office was not aware at the time Hillary Rodham Clinton was secretary of state that she relied solely on personal email and only found out as part of the congressional investigation into the Benghazi attack, according to a person familiar with the matter.

Can someone explain how the White House didn’t know this??!! I mean seriously, she was Secretary of State for FOUR years and no one picked this up? WOW. Meanwhile, as news broke that the House Select Committee on Benghazi issued a subpoena directly to her for all correspondence; Hillary herself tried a “Look Squirrel!” deflection with this midnight tweet:

I want the public to see my email. I asked State to release them. They said they will review them for release as soon as possible.

Yeah, that’s not going so well. Team Clinton tried to point out that others, especially Republicans, have used private emails for correspondence. And then this happened:

ICYMI, Obama's State Dept used to torch Ambassadors for doing what Hillary did re: email: https://t.co/2QxFChLY9j

Oops, that one is gonna hurt!

Hillary, you served as Secretary of State for FOUR years, and during that time you took secrecy and paranoia to a whole new level. You throw us a bone by graciously releasing 55,000 emails back to the State Department all the while knowing it will take MONTHS to comb through everything and figure out what if any national security breaches you committed. Furthermore, you used your personal email exclusively while conducting federal business. You flouted the rules set forth by the State Department and the White House, and you got away with it for a while.  But not anymore Toots.

I know you are asking yourself, What Difference Does It Make?  Well, guess what?  Your sense of entitlement, your belief in your own hype, your foundation’s receipt of millions from foreign governments while Secretary of State, your flouting of federal government rules, and your paranoid quest to keep things secret thus endangering our national security makes a helluva difference. Hillary, your little email problem is growing. If I were you, I’d pack up your Presidential campaign bags and go home.