Previous post
Biden to Fallen SEAL Tyrone Woods' Father: "Did Your Son Always Have Balls the Size of Cue Balls?" 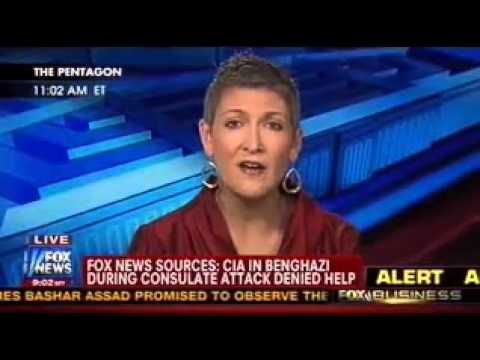 As if the debacle that was Benghazi couldn’t get any worse, Fox News’ Jennifer Griffin drops this bombshell: CIA officials on the ground in Benghazi during the attack requested military backup three times. And all three times, that backup was denied.

Fox News has learned from sources who were on the ground in Benghazi that an urgent request from the CIA annex for military back-up during the attack on the U.S. Consulate and subsequent attack several hours later was denied by officials in the CIA chain of command — who also told the CIA operators twice to “stand down” rather than help the ambassador’s team when shots were heard at approximately 9:40 p.m. in Benghazi on Sept. 11.

Former Navy SEALs Tyrone Woods and Glen Doherty were part of a small team who were at the CIA annex about a mile from the U.S. Consulate where Ambassador Chris Stevens and his team came under attack. When they heard the shots fired, they radioed to inform their higher-ups to tell them what they were hearing and requested permission to go to the consulate and help out. They were told to “stand down,” according to sources familiar with the exchange. An hour later, they called again to headquarters and were again told to “stand down.”

Woods, Doherty and at least two others ignored those orders and made their way to the Consulate which at that point was on fire. Shots were exchanged. The quick reaction force from the CIA annex evacuated those who remained at the Consulate and Sean Smith, who had been killed in the initial attack. They could not find the ambassador and returned to the CIA annex at about midnight.

At that point, they called again for military support and help because they were taking fire at the CIA safe house, or annex. The request was denied. There were no communications problems at the annex, according those present at the compound. The team was in constant radio contact with their headquarters. In fact, at least one member of the team was on the roof of the annex manning a heavy machine gun when mortars were fired at the CIA compound. The security officer had a laser on the target that was firing and repeatedly requested back-up support from a Specter gunship, which is commonly used by U.S. Special Operations forces to provide support to Special Operations teams on the ground involved in intense firefights. The fighting at the CIA annex went on for more than four hours — enough time for any planes based in Sigonella Air base, just 480 miles away, to arrive. Fox News has also learned that two separate Tier One Special operations forces were told to wait, among them Delta Force operators.

The Special Operations team based out of Sigonella could have been at Benghazi in less than two hours. Two hours. Woods and Doherty were fighting for more than four hours before they died, which means that their deaths could have been prevented, had backup not been repeatedly denied.

Leon Panetta’s response to all of this?

“There’s a lot of Monday morning quarterbacking going on here,” Panetta said Thursday. “But the basic principle here … is that you don’t deploy forces into harm’s way without knowing what’s going on.”

With all due respect, this is not Monday morning quarterbacking. It becomes clearer by the day that the administration and the CIA knew what was going on as it unfolded. And rather than take action to save the lives of our ambassador and the other Americans there — men like Woods and Doherty, who selflessly fought, ultimately giving their own lives, against orders to save the lives of others — they sat back and watched the destruction unfold, watched as four Americans were murdered. Woods and Doherty, in their unbelievable heroism and bravery, fought until the end, and the worst part is, they didn’t have to die. There was no reason that four Americans should have died in this attack. That much becomes clearer by the day.

And what did our president do following this attack? He went to Las Vegas and begged for money.

Every American should be shouting in the streets right now for the people involved in this to resign: Hillary Clinton, Leon Panetta, David Petraeus, and Barack Obama.

What’s really sickening is that Fox News is the only media outlet covering this. Every other news organization is so in the tank for Obama that they’ll cover up something this explosive to ensure his reelection. Shame on them.

Just how fiercely did Doherty and Woods fight?

One witness told Fox News that Doherty and Woods were found on the roof of the intelligence base manning a single machine gun that was caked in blood, suggesting they continued firing after they were hit by a mortar round approximately seven hours after the attack began.