Previous post
The Biden-Harris Administration Is Now A Reality

Gun Free Zone – This Is On Biden, Too

Next post
Kamala Harris In Charge Of The Border Crisis Now

Gun Free Zone – This Is On Biden, Too 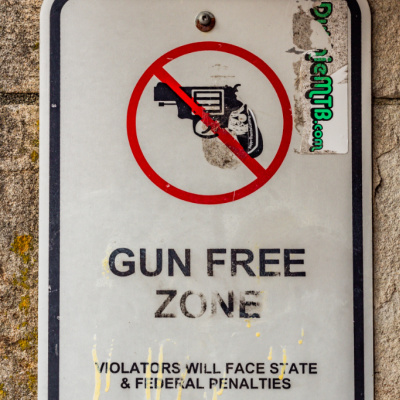 Another week, another mass shooting. Eighteen lives lost in, really, less than a week. Mass killings are as old as history. Guns, knives, bombs and automobiles have all been used as weapons of mass destruction. Guns are the great equalizer. With a gun, you can shoot the other shooter, the knife wielder, the bomber or the automobile driver. Much of the United States, unfortunately, is a gun free zone. For that, you can thank the current occupant of the White House, Joseph R. Biden.

I grew up with lots of weapons. My late, U.S. Marine, father owned many weapons and built muzzle loading rifles. I spent many a weekend at the National Muzzle Loading Rife Association campsite in Friendship, Indiana. I respect weapons, but I don’t fear them. I think that used to be the default American position. That is until the gun grabbing fascists got busy. There have always been gun control zealots, since about five minutes after the 2nd Amendment was ratified. The calls for gun control really started after President John F. Kennedy was shot in 1963.

There were no such things as gun free zones until 1990 and Senator Joseph R. Biden. The Gun Free Schools Zone Act (S3266) was introduced by Biden and affirmed by the Senate in 1990. It was declared un-Constitutional by the Supreme Court and amended in 1995. Gun Free Zones have become the norm in this country. I remember the first time I saw the Gun Free Zone sign on a building. It was my son’s school and I thought it was stupid. Why not just advertise that these kids are targets?

Since then, many businesses have followed suit and made their spaces gun free zones. Or, sort of. CVS, Walmart, Kroger (parent company of King Sooper) and others have issued statements that request patrons not open carry, or something:

Supermarket and pharmacy chains across the U.S. have begun asking customers to not openly carry firearms in their stores, including in states where open carry is legal. It’s a trend that appears to have been sparked by Walmart, whose CEO Doug McMillon announced the decision on Tuesday following a string of mass shootings around the country — including the Aug. 3 shooting in which 22 were killed at a Walmart store in El Paso, Tex.

McMillon announced on Tuesday that Walmart would stop selling handguns and military-style rifles. In the same statement, he requested that customers no longer openly carry firearms into Walmart stores. Several other chains have followed suit. As of Friday, Kroger, CVS, Walgreens and Wegmans had all issued similar statements of their own.

Panera Bread, Chili’s, Starbucks and, without irony, Target are all gun free zones.

Speaking from the State Dining Room in the White House on Tuesday, Biden called on lawmakers to reform background checks for gun purchases. “I don’t need to wait another minute, let alone an hour, to take common sense steps that will save lives in the future and to urge my colleagues in the House and Senate to act,” Biden said during a 8 minute address. He pointed to two House bills that have already passed that would expand the use of background checks and other measures, and he urged senators to approve the bills. “The United States Senate, I hope some are listening, should immediately pass bills that close loopholes in the background check system,” Biden said.

Here is a clue: Bad people don’t obey the law. That’s a fact. Gun free zone, bah. As a matter of fact, Attorneys for Freedom assert that 98% of mass shootings take place in gun free zones:

According to the Crime Prevention Research Center, “gun free zones” (areas where guns are prohibited) have been the target of more than 98% of all mass shootings. This staggering number is why such designated areas are often referred to as “soft targets,” meaning unprotected and vulnerable.

“According to the Crime Prevention Research Center, only a little more than 1% of mass public shootings since 1950 have occurred in places that were not considered to be a gun-free zone,” reports The Blaze. “In fact, as Crime Prevention Research Center President John Lott Jr. noted in October 2015, only two mass shootings in the U.S. since 1950 have occurred in an area where citizens were not prohibited from carrying a gun.”

Every shooting has been done by a person who was mentally ill, flat evil or both. The mass murderer had, in every case, been on the radar of the school, law enforcement or family members. That’s what we need to talk about. A longer waiting period isn’t going to help that. Gun free zones don’t help and most assuredly hurt. Ask a gun-grabber to define assault weapon. That’s a good place to start. My definition is an assault weapon is whatever you are assaulting me with. From teaspoon to pool cue, they can all be assault weapons.