Previous post
Half of Americans Won't Let Their Sons Play Football: Why Are We Turning Our Boys Into Cupcakes?

Next post
Just in Time for Christmas Gifting: A Phallic Cross

Greenpeace may be all about saving the environment, but they sure as hell like to wreck it while they do! Their latest foray into telling the world that we need to save the future is bombing spectacularly. The brain trust at Greenpeace decided a publicity stunt in Peru during the U.N climate talks was needed. Twenty Greenpeace activists tromped all over an archeological monument sacred to Peruvians, the delicately beautiful Nazca Lines. According to the Inquisitr:

The Nazca Lines in Peru are immense depictions of animals, including a monkey and a hummingbird that are etched into the arid ground in Southern Peru. The lines represent a vital part of the country’s heritage. Visits to the Nazca Lines, which can only be realized fully from the air – something that makes them special since they were created between 1,500 and 2,000 years ago – are supervised extremely closely. Visiting ministers and presidents have to get special permission and receive special footwear to venture anywhere near the area where the Nazca lines are cut into the ground according to the BBC.

If Kings and Presidents have to get permission walk on the ground near the drawings, why did Greenpeace think they could waltz right in without so much as a by your leave? Oh right, they thought they were above all that. You see, their goal was so much more “important”:

One of the activists, Mauro Fernandez, explained what the Greenpeace members were trying to accomplish.
“With our message from the Nazca lines, we expect politicians to understand the legacy we need to leave for future generations. It is not a legacy of climate crisis.”

Wow. So it’s A-OK to go trampling around a sacred site just to make a freaking point?! Oh I think they made a point alright. Just not the one they intended. The Peruvian government is understandably pissed off. According to Adam Clark Estes at Gizmodo:

“This has been done without any respect for our laws,” Peru’s deputy minister for culture Luis Jaime Castillo told the press, calling Greenpeace’s actions “thoughtless, insensitive, illegal, irresponsible and absolutely pre-meditated.” He explained further: “It was done in the middle of the night. They went ahead and stepped on our hummingbird, and looking at the pictures we can see there’s very severe damage. Nobody can go on these lines without permission—not even the president of Peru!”

Lets take a look at this beautiful Nazca Hummingbird.  I can’t imagine making this 1500 years ago and never seeing what it looked like from the air! 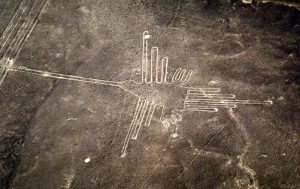 Now take a look at what Greenpeace did: 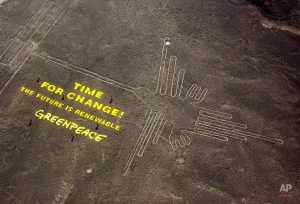 Ponder both of those photos for a minute.  Here we have an amazing 1500+ year old archeological wonder that is all “prettied” up with neon yellow cloth.  Can someone please tell me why stomping around an archeological site to place a freaking banner will renew the future??  I don’t think they even know how to explain why stupidity like that will help.  The Greenpeace brain trust is most definitely clueless, and they really really are sorry!

“Without reservation Greenpeace apologizes to the people of Peru for the offence caused… We are deeply sorry for this. We fully understand that this looks bad. Rather than relay an urgent message of hope and possibility to the leaders gathering at the Lima UN climate talks, we came across as careless and crass. We have now met with the Peruvian culture ministry responsible for the site to offer an apology. We welcome any independent review of the consequences of our activity. We will co-operate fully with any investigation.”

I think Greenpeace saying this looks bad is one massive understatement! And it seems the people of Peru nor the Peruvian government are buying their “apology.”

Deputy Culture Minister Luis Jaime Castillo called it a “slap in the face at everything Peruvians consider sacred.”
He said the government would seek to prevent those responsible from leaving the country and ask prosecutors to file charges of “attacking archaeological monuments,” a crime punishable by up to six years in prison.

This publicity stunt has certainly brought attention to Greenpeace and their so-called argument against the expansion of carbon footprints.  However, I’d say anger at their actions is definitely not the attention they were hoping for. Greenpeace has indicated their willingness to face any “fair and reasonable consequences” of its actions, which could include 6 years of jail time for the  20 activists who are barred from leaving Peru.

The hypocrisy of Greenpeace’s demanding the environment be saved, yet at the same time causing irreparable damage to an archeological wonder is staggeringly stupid. Greenpeace’s quest for publicity has backfired, and they have only themselves to blame for angering an entire country with their so-called “stunt.”