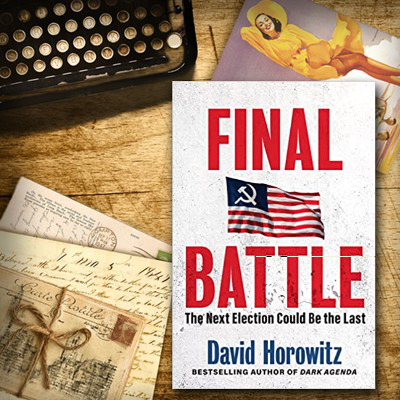 The past month has seen a number of books purporting to give the “honest” description of what happened of January 6, 2021. Most of them as little more than poorly disguised and even more poorly researched hit jobs out to promote the author’s opinion of what the “correct” story happens to be. Final Battle: The Next Election Could Be The Last is different. Even when the book’s author, David Horowitz, lets his personal opinions show, he does so in a way that they do not detract from the prose or from the facts. It would be easy to dismiss the book because of Horowitz’s political views but don’t. Really, don’t. This book is too important to turn a blind eye to it simply because you might not agree with the author’s political views or his view of Donald Trump.

In a constitutional democracy, elections are sacred rites. They register the will of the people of sovereign, and make ballot boxes the ultimate courts of appeal. (Final Battle, ch. 1)

I picked the book up and fully expected to want to wall plant it before I finished. Like so many Americans, I’m tired of both sides of the political fence using the events of January 6th for their own political benefit, twisting what happened with little concern for the truth. To say Final Battle was a pleasant surprise is putting it mildly.

The first chapter should be mandatory reading for high school Civics classes. Heck, it should be for high school English classes as well. For the latter because Horowitz manages to set out the basis, the premise, for his book in an engaging, authoritative and thoughtful manner. It is close to a master class in balancing research with factual conclusions and opinion. As for being mandatory for Civics classes, let’s just say Horowitz reminds his readers of what the founding fathers worried about when they considered what form of government the newly born United States would adopt. He reminds us about the checks and balances those same founding fathers put into place to protect our nation.

Checks and balances that are in danger because of the machinations of the Democrats.

The constitutional system the Founders devised, endowed citizens with unprecedented freedoms, framed as limits to governmental powers. Their purpose was to protect the people from governmental abuse, and to encourage them to challenge orthodoxy in all its forms. (Final Battle, ch 1)

This is something that has been forgotten over the last few years, as Horowitz points out. The Democrats and certain so-called Republicans don’t want the voters in our country to remember where the power really lies. They want us to trust them when they say it’s for our own good that they do their best to make it all but impossible to have a clean election. Horowitz reminds us of all this and does so in a way he not only gives the historical reasoning behind our election system but also gives us the citations and the quotes to give strength to our own comments when we try to debate the issue.

But, as Horowitz reminds us, this problem didn’t begin with the 2020 election. In fact, according to him, it reached a critical point during the 2000 presidential election. Remember the hanging chads? Remember how the Democrats refused to admit Bush won fair and square? Remember how they said Bush was “selected” president instead of “elected”?

Funny, isn’t it, how they conveniently forget their election denial as they condemn everyone who questions the results of the 2022 election.

One point he makes in the first chapter–and another reason why I think everyone should study not just this chapter but the entire book–is that after the hanging chad controversy, Jimmy Carter and James Baker decided to put their heads together to address the questions raised about election integrity. The former president (D) and former secretary of state (R) and their “Commission on Federal Election Reform” conducted a year-long investigation before reporting out their findings and recommendations. They recommended increasing voter ID requirements, limit mail-in ballots (“the largest source of potential voter fraud”), purge voter rolls of the dead and fraudulent names, and more.

Hmm, all that sounds familiar, doesn’t it? Funny how a former president, a liberal Democrat, could see the issue only to have his own party doing everything it can today to not only ignore the findings and recommendations of the commission he co-founded but also doing what it can to tear down those protections and others.

But we don’t hear about all this in the media. Our kids are not taught about it in school. Yet another reason this book should be required reading in my opinion.

The examples go on and on. Not just in the first chapter but throughout the book. This is one of the most detailed, well-researched and compelling take-downs I’ve seen of the Democrats and their “take” on the events leading up to January 6 as well as their desire to destroy our electoral system. His final words in the book are chilling.

Their (democrats) zealous advocacy of socialist economics and political fascism sets us on the path to a totalitarian future. All that awaits the sad conclusion to these efforts are the gulags and deprogramming camps, which they are not shy about promoting.

This will come to pass if we don’t step up and do our duties as citizens: vote, hold our elected officials accountable, learn about the reasoning for why the founding fathers set things up as they did and make sure our children know.

I cannot recommend this book highly enough. We know the Dems have their talking points. Horowitz has given us our own and has down all the research for us and has shown us how to make our point without sounding like a harridan or blithering idiot, foaming at the mouth because we’ve swallowed the pill of liberal/socialist ideology.