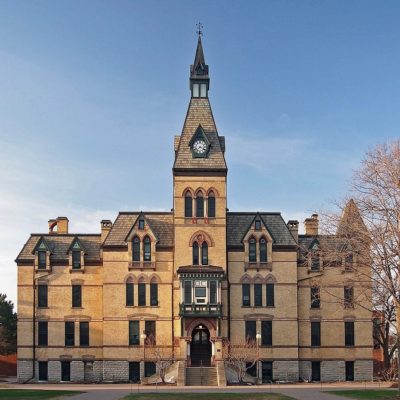 The woke scolds at Hamline University in Saint Paul, Minnesota have walked back their claims of Islamaphobia against former professor, Erika López Prater yesterday.

López Prater, an adjunct professor, showed a picture of the Prophet Muhammad in an art history class-causing an uproar back in October. Since, many Muslims viewing visual representations of the prophet are prohibited, some thought the professor’s actions as highly “Islamaphobic”. Take a look:

Despite a “trigger warning”, it appears the student was triggered when Dr. López Prater, showed the classroom a medieval depiction of Muhammad, an “incident of hate and discrimination“, apparently. Hell, even the university’s associate vice president of inclusive excellence (AVPIE) found it to be “undeniably inconsiderate, disrespectful and Islamophobic“.

Associate Vice President of Inclusive Excellence? An AVPIE? Where in tarnation do they get these titles from? Much less pay these people for this crap? This is what costs students roughly $47,000 a year in tuition, by the way.

It was decided it was best that this faculty member was no longer part of the Hamline community.”-David Everett, AVPIE, Hamline University

It was decided that a few triggered individuals trumped academic freedom.

Islamophobia is a serious and ongoing threat in this nation, and it has numerous ugly manifestations, including the vandalism of mosques, the harassment of and violent attacks on Muslims, and hate speech across social media and, at times, at the highest levels of political power. One reason that I have given numerous public lectures about Islam in churches, synagogues, and meeting rooms around the country is to combat ignorance, stereotyping, and Islamophobia. But I believe that, in the context of an art history classroom, showing an Islamic representation of the Prophet Muhammad, a painting that was done to honor Muhammad and depict an important historical moment, is not an example of Islamophobia. Labeling it this way is not only inaccurate but also takes our attention off of real examples of bigotry and hate.”-Professor. Christiane Gruber

Other professors rallied in López Prater’s corner. Even CAIR spoke out:

Although we strongly discourage showing visual depictions of the Prophet, we recognize that professors who analyze ancient paintings for an academic purpose are not the same as Islamophobes who show such images to cause offense. Based on what we know up to this point, we see no evidence that Professor Erika López Prater acted with Islamophobic intent or engaged in conduct that meets our definition of Islamophobia”.-CAIR

And it seems as though Hamline University is walking back its comments that caused López Prater to lose her job. Why? Because she is now seeing them. And we say, good for her.

Like all organizations, sometimes we misstep.”-Ellen Watters, the chair of the university’s board of trustees

I’ll say. They’ve stepped in to a heaping pile of dog poo.

In the interest of hearing from and supporting our Muslim students, language was used that does not reflect our sentiments on academic freedom. Based on all that we have learned, we have determined that our usage of the term ‘Islamophobic’ was therefore flawed.”-Fayneese S. Miller, President, Hamline University Board of Trustees

It was never our intent to suggest that academic freedom is of lower concern or value than our students — care does not ‘supersede’ academic freedom, the two coexist.”-statement from Hamline University

The lawsuit filed on behalf of López Prate states the professor suffered loss of income from her adjunct position, emotional distress and damage to her professional reputation and job prospects.

David Redden, a lawyer for Dr. López Prater, says the university’s change of heart on the “islamaphobia” accusations does not change the lawsuit and that he, and his client, will pursue legal action against the university.

Thank you for this. We can't have colleges bending the knee everytime a kid throws a tantrum. They are trying to erase history, and have no idea the damage they are causing. The administration needs to take a stand like the authority figures they are supposed to be.

The problem here is money. Colleges need money. Enrollment for a small college such as Hamline has gone down since the pandemic. Hamline, like most colleges, has dropped standardized test scores and, apparently, the requirement to be able to read a syllabus for students. Dr. López Prater stated explicitly in her class syllabus that one session would include a discussion on the depiction of Muhammad. You know what most of us in the free world do when we see stuff we do not believe in or agree with? We turn off the television. We choose not to participate. We don’t try to get people fired. We respectfully disagree. We walk away. We simply don’t partake. So many options to exercise in a country such as ours.

This incident also raises questions about what happens when we parent kids and bow to their every demand? I think most of us sensible individuals know the answer. These kids grow up to be petulant adults who are hurt and offended by everything and out to ruin as many lives as they can in their wake. While their parents are paying the bills. They think they can go to college and convince college administrators to give them their way-even it it’s at the expense of a grown adult and her livelihood as in the case of this professor.

What in the world has happened to colleges and universities? Your mandate isn’t to create safe spaces free of discomfort. At this rate, your relevance and existence will be over in a decade or two.

It’s true. College is supposed to be uncomfortable; the whole college experience is supposed to provoke thought-to journey out of one’s comfort zone. Since when it the goal to make everyone on a college campus comfortable? I hope this professor sues for megabucks.