“Do You Think We’ll Make It Through the Next Two Years?” 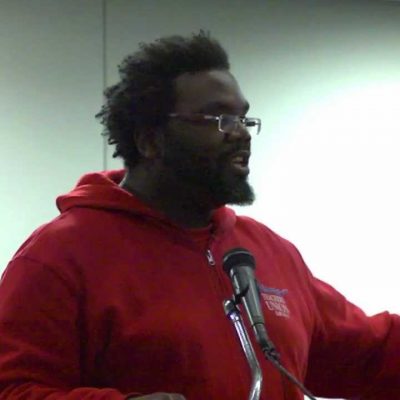 “Do You Think We’ll Make It Through the Next Two Years?”

Yesterday morning I curled up in a comfy chair and did what I’ve been doing for decades since my college years.

I made my weekend call to my dad. In former times I spoke mostly with my mother, but when she developed Alzheimer’s several years ago, my conversations gradually drifted to my father. She passed away two years ago, and now I find it imperative to maintain regular contact with my dad, who still lives in the same house in which I grew up, some 500+ miles from my present home.

Dad is now 90 years old, and for a boy from blue-collar Gary, Indiana, he has risen above many challenges. A child of the Great Depression, he saw an older sister die from tuberculosis and nearly lost his mother to the same. He flew 50 missions in a B-17 bomber over Europe in World War II, grew a small business, fought back an aggressive cancer, and lost his wife of 65 years. Because of his WWII veteran status, he has become kind of a rock star in his hometown; he has addressed various groups about his service, has been the subject of a couple of newspaper articles, ridden in parade floats, and even been interviewed on a radio program.

The old man is, as my husband puts it, a “tough old bird,” but nearly every week when I speak with him about politics he asks me the same question:  “Do you think we’ll make it through the next two years?”

Of course he’s speaking of our country. I remind him that the midterm elections look promising for Congress, and he agrees, but he looks at a bigger picture.

He remembers a time when the nation was united to beat back the scourge of Nazi and Japanese aggression. When the United States declared war, this united feeling was about all the US had — as Dad put it regarding early military preparedness, “We didn’t have a pot to pee in!” President Franklin Roosevelt may not have been anyone’s idea of a conservative with his penchant for big government, but there was an enemy to be defeated — not “contained,” defeated — and Dad has spoken of how Republicans and Democrats had banded together in that effort during the war years.

Home front solidarity was maintained by images such as this: 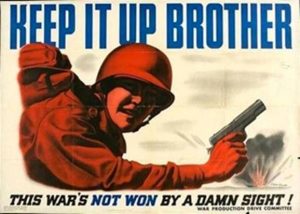 President Roosevelt, and later President Harry Truman, did not wax lyrical as Obama has about “respecting” those who would kill us. They would accept nothing less than total surrender.

Was the war conducted perfectly? No, no war ever is. We wince now at the internment of Japanese civilians starting in 1942. Few people know of the internment of German-American and Latin-American citizens during the war years. My mother’s parents, German immigrants who had emigrated to America prior to World War I, were questioned by the FBI in their home. Mom told me that occasionally my grandparents would receive cold looks in public when their accented speech was detected, but it was not a regular occurrence.

The nation was not fractured, it was banded together to win. The Allied leaders, particularly Roosevelt, Winston Churchill, and later Harry Truman, had no compunction about destroying the enemy and achieving complete victory.

And while the Community-Organizer-in-Chief frolics on the golf course on his three-week vacation, an old veteran who has lived through his nation’s biggest trials asks, “Do you think we’ll make it through the next two years?”