Previous post
Man Kills Wife Stricken with Alzheimer's Disease -- But Is it Mercy?

Not long ago, President Obama told Americans that he’s not on any ballot for the mid-term elections, but his policies are. Well by golly, that’s about the most truthful statement he’s made since he took office in 2008. And guess what? Voters all across the country made their opinions of his policies very VERY clear.

Were voters happy with the policies of President Obama? Not hardly. Lets examine one of his policies in particular. “If you like your healthcare plan, you can keep it.” The Affordable Healthcare Act of 2009 is turning out to be not so affordable. Many people, including myself, knew that when the Act was passed. I read it and it was a painfully illuminating and scary read. Others didn’t. Others told us to not worry, once its passed we can all figure out what’s in it. Yes Nancy, I’m looking directly at your botoxedness.

In 2013, the national and state plan enrollment was opened. From day one there have massive hiccups, boondoggles, warnings of security risks, and more. Folks who had working plans and doctors of their choosing ended up in mad scrambles to either keep those docs or figure out how to deal with the ever increasing out-of-pocket expenses. That’s if they were able to sign up for the new plans at all.

Fast forward to Tuesday’s Mid-Term elections. 28 US Senators who voted in favor of Obamacare will be heading home at the end of this year after losing their re-election bids. But that doesn’t matter. According to Katie Pavlich at Townhall:

During his post-midterm press conference yesterday, President Obama falsely claimed that Obamacare is working for Americans all over the country. Based on his rhetoric, he also seemed to fail at understanding the damage votes for his signature piece of legislation did to his former Democrat majority in the Senate.

President Obama’s prediction that his healthcare policy is on the ballot held true for state races. In Maryland:

Brown’s Republican challenger, Larry Hogan, made the failed launch of Maryland’s Obamacare exchange a central point of his campaign in questioning whether the Lt. Governor was ready for a promotion to the Governor’s office.
In an ad titled ‘Weak Leadership’ released in early September, Hogan blamed Brown for “$169 million wasted” and “families unable to get health insurance” and concluded with the line “Anthony Brown: Just not ready to be governor.” Hogan also brought up the botched rollout in debates, calling it a “complete disaster” and pointed out Brown’s responsibility for the failure.

Mr. President, according to Margaret Talev of Bloomberg Politics, you tell us:

“I’m committed to making sure that I measure ideas not by whether they are from Democrats or Republicans, but whether they work for the American people,” Obama said Wednesday, adding “that’s not to say that we won’t disagree over some issues that we’re passionate about. We will. Congress will pass some bills I cannot sign. I’m pretty sure I’ll take some actions that some in Congress will not like. That’s natural. That’s how our democracy works.”
One spot where the president said he would not budge is the Affordable Care Act. While the president signaled that he was open to some “responsible changes,” when it comes to a full repeal, “I won’t sign. Efforts that would take away health care from the 10 million people who now have it and the millions more who are eligible to get it, we’re not going to support.”

Mr. President, you do realize that your Affordable Care Act has led to many small businesses foregoing employee coverage and sending their employees to individual healthcare coverage right? Can you lift your head up out of the sand trap long enough to realize that small business owners may not be able to afford insurance for their employees or even themselves? Oh sorry, I forgot who I was asking.  You don’t like to deal in facts or reality. 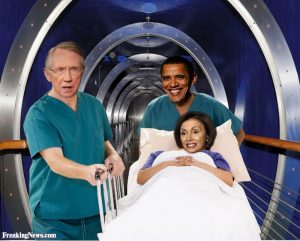 How about individual healthcare plans, you know the ones that cover all sorts of goodies such as breast pumps, contraception coverage, and acupuncture? What if a person is 60 years old and is an employee of a church?  CA just answered that with a law passed requiring that churches in CA don’t have to cover contraception but their insurance plans must cover elective abortions. Can someone tell me the last time an 60 year old required contraception or elective abortion services?  I didn’t think so.

Lets go back to the “affordable” part of the equation. My brother-in-law received this letter just a few days ago concerning his CA Bronze coverage plan: 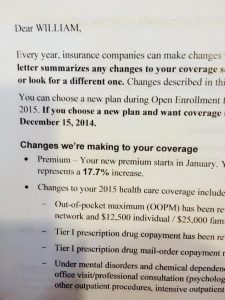 Starting in January, they have a 17.7% increase in their coverage brand-spanking new premium that will now cost them $1,041.90 a month.

Mr. President, you defiantly state that you won’t sign a repeal. Alrighty then. You leave the door open barely a smidge to contemplating making changes to the law as long as those changes are “responsible.” Will YOUR responsibility involve re-working this law to ensure it truly is affordable? Because a 17.7% increase in coverage for two people on the BRONZE plan after one year is the opposite of affordable!  Will you truly listen and respond to the American voters?  Given your body language and tone at the press conference on Wednesday, I’d say the answer is a resounding N.O.

By the way, I’m not just taking the President to task, I’m looking at Republicans too. For all the Republicans IN office and those who will be going to DC in January, take note. You have a great deal of WORK to do on issues that American voters have spoken on. You’d better pay attention to the issues at hand NOW. Quit with the positioning and talk of who will run in 2016. Don’t let Minority Leader Harry Reid lead you and America around by the nose. Furthermore, I don’t care if Nancy Pelosi thinks ACA is hers, its not.   To those Republicans who kept their seats and for those newly elected, if you don’t focus RIGHT NOW on issues such as healthcare and do the hard work needed to revise this idiotically expensive cumbersome law; then I’ve no doubt that those who were happy to give you a chance would be just as happy to boot you right back out of office at the next election.