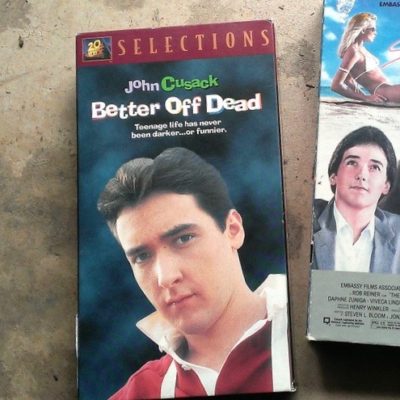 Here we have another prime example from the “you should just stick to acting” file. Let the spotlight shine on John Cusack for a few moments.

What set off John Cusack? A baseball game. Boeing. Saluting American heroes. Because, really, airplanes and service members are the trigger for all that is wrong with our country. Let us not forget the colors red, white and blue, too. We should be ashamed of ourselves.From Cusack’s Twitter feed:

Cusack was having a very bad day, apparently. Or maybe he is in need of some publicity since his star is not shining so bright these days. Poor John. Nobody’s paying attention to him.

Let’s call the USA what it is – decadent on the fast track to autocracy – living on the atavistic fumes of ww 2 greatest generation Tver actually took on fascism and beat it down –
We can’t even arrest open criminals in gop- nor a mentally ill white supremacist lawless thug https://t.co/8lkdKOp6wF

Flag-sucking half-wits. Wow. He must be a joy to be around. No wonder this guy never married. In the delusional mind of John Cusack, we here in The United States are decadent (and) on on the fast track to autocracy? This from a Bernie Sanders supporter. How many homes does Bernie have and what is his estimated net worth? And who sold their home in Malibu for $10.3 million?

Cusack has a long record of outspoken, delusional political views. He spoke out and claimed he would no longer speak to any family members or friends who were even remotely in support of former President, Donald Trump.

This is what happens when semi-rich kids from families of Democrats are indoctrinated in their parents’ ways and given a platform. They speak and they speak out of their rear-ends because they haven’t a clue and have never been in touch with grim realities in their own backyards. They drove right past the inner-city ghettos. Their neighborhoods are predominantly white. They are not faced with the option of enlisting in our military to finance their college education. Furthermore, they have the luxury of going off to college to study things like art, acting, or the new all-time favorite amongst white, suburban kids, gender studies. They lack the maturity needed to have meaningful debate and discussions. Support someone they’re opposed to? They don’t want to hear it. They’ll block you on social media. They’ll shut you down by name-calling, insulting your intelligence or by meaningless platitudes.

But the National Anthem and Boeing saluting selfless Americans who go into combat zones while their loved ones hold down the Homefront is spreading a “big lie”? How about telling everybody they are worthless racists if the color of their skin is white? How about telling a biological boy that he can be a girl or a biological girl that she can be a boy? What about telling these “transitioning” boys and girls that these hormones won’t harm them? How about the big lies surrounding COVID in 2020 or our electoral process? If you really want to talk BIG lies, Mr. Cusack, boy have we heard some whoppers from your political party of choice!

In conclusion, Cusack had this to say:

We aren’t great – we aren’t even mediocre – we’re f*cking awful – full of cowards and corporate wh*res – Boeing gets to take out tax dollars – parade our soldiers – wrap themselves in the flag – while financially backing fascists? We have no leaders – no soul – Just greed.”-John Cusack

No, John, YOU aren’t that great anymore. In fact, dare I venture to say that YOU are not even mediocre. And, while I do not advocate for trashing someone’s looks, ummm, John? Your plastic surgery is f*cking awful. If anyone is financially backing fascists while wrapping themselves in the flag, it is not Boeing. It is our current leadership caving to the fascism, caving to the Socialist ideals people like you embrace.

…And here you are complaining about how others (who's opinions you don't like) have the freedom to express theirs. Weird.

Seriously. Post your Twitter rants from Venezuela or red China, John. Let us know how that works out for you.

John Cusack may be right in terms of the lack of leadership in this country right now. We look no further than Joe and Kamala as shining examples. And he is certainly right about their souls or lack thereof. But that’s all he is right about. Mr. Cusack, if you are that triggered about a corporation, the American Flag, and our troops, perhaps you should stay holed-up in your luxury Chicago penthouse. Or, you can Kindly leave the Land of the Free, BECAUSE of the brave altogether. But alas, you’re still here to Say Anything you want, regardless of how nonsensical it is. Now, that’s what we call freedom!