Next post
The Deepening Madness of Maddow and Company 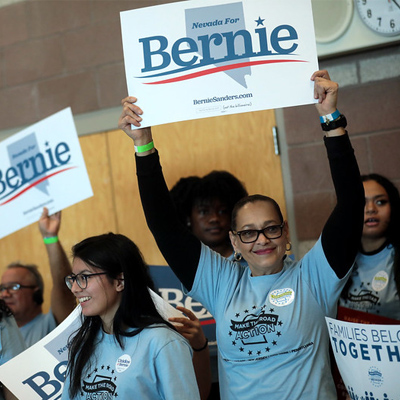 If you’re not from the Chicago area, you probably have never heard of chumbolones. But the local term perfectly describes Bernie Sanders supporters. Urban Dictionary defines a chumbolone as someone who follows ideas against their own best interest. Which, naturally, describes the chumps who support Sanders and his socialism schtick.

Sanders, of course, has long praised the tyrannies of Soviet Russia, Nicaragua, and Cuba. He has also said that China has done more to erase poverty than “any country in the history of civilization.”

And the chumbolones swallow this madness hook, line, and sinker.

“Medicare for all.” “College for all.” “Housing for all.” The list of rainbow-and-unicorn promises go on and on at Bernie’s website. And all these are part of Sanders’ enthusiasm for “democratic socialism,” because Bernie never met a socialist leader he didn’t like.

Problem is, a lot of those leaders control communist nations with little respect for their citizens. But for Bernie, it’s all good. We’re the ones who are misguided about the whole freedom thing.

For example, when Sanders and his wife Jane married in 1988, they honeymooned in the Soviet Union, which certainly couldn’t be confused with a Beaches resort.

Who does that? Why, Bernie Sanders, who sang Moscow’s praises:

“We were astounded with the openness, the optimism, the enthusiasm in the nation. … What struck me the most was the way that they dealt with children, and the cultural life of their community.”

Why did the new Mr. and Mrs. Bernie Sanders find the oppressive USSR so charming? They loved the free theaters. And then there were subway stations, which Sanders described as “very beautiful, including many works of art, chandeliers that were beautiful. It was a very, very effective system.”

Yeah, about the glories of the subway system and the free theater: Katya Sedgwick, a writer who grew up in the old USSR, wrote that people were “stuffed into trains like sardines.” And as for the “free theaters” — no one wanted to visit them, she wrote.

Moreover, she found that Bernie and Jane Sanders were dupes who wanted to see Russia through their rose-tinted narratives. As Sedgwick concluded:

“Regardless, the man who could be led astray that easily should never be the president of the United States.”

And then there’s Bernie’s love for Cuba. No, not the Cuba before the Communist revolution, when it was one of the most advanced nations in Latin America. Instead, Bernie cheered Castro’s takeover, saying he was “very excited and impressed by the Cuban revolution.” What’s more, watching John F. Kennedy discuss overturning the revolution during one of the 1960 presidential debates nauseated him. Literally.

“I actually left the room because I was about to puke.”

But, as we know all too well, the revolution endured. And, just like they visited Russia, Bernie and Jane Sanders toured Cuba in 1989 and came away gushing with praise:

Never mind that Cuba is a hellhole when it comes to health care, where doctors reuse latex gloves, and hospitals are unsanitary. What’s more, the unfortunate souls who have to enter a Cuban hospital must also bring their own sheets, soap, towels — even toilet paper.

But Bernie’s love for socialist dictatorships doesn’t stop at Cuba. No, he also loves the Marxist government of Nicaragua under Daniel Ortega. In fact, he even once compared himself to Ortega, saying that his challenges as mayor of Burlington, VT, were a lot like those Ortega faced. Sanders said that dealing with the Burlington city government was “more like having Daniel Ortega having the Contras as his advisers.”

Plus, in a repeat of his USSR and Cuba trips, Sanders toured Nicaragua in 1985 and found Ortega to be an “impressive guy.” And, of course, Nicaraguans were happy with their lot under Ortega:

“Most of the poor and the working people I talked to felt that the situation now was much better than before.”

Never mind that Ortega had aligned with the Soviet Union, and that human rights abuses were rife. Never mind that even Congressional Democrats didn’t support Ortega and his Sandinista government. As I said above — Bernie has never met a socialist leader he didn’t like.

So why would anyone support Bernie Sanders?

Blame it on the chumbolones amongst the millennials. They believe there will be utopia if Bernie gets elected president. But they don’t know history: that the bloody Bolshevik revolution in Russia started with Lenin’s promise of “peace, land, and bread.” And that Fidel Castro promised his people free health care and an end to racial discrimination — which sound eerily familiar, don’t they?

Castro once declared in a 1959 speech that “we are not Communists.” Yet while Bernie Sanders keeps insisting that he’s not a fellow traveler, he has celebrated communist dictators who have made hellish the lives of their citizens.

But the chumbolones don’t care about all that. Because Bernie has promised them rainbows, unicorns, and free stuff. What could possibly go wrong?