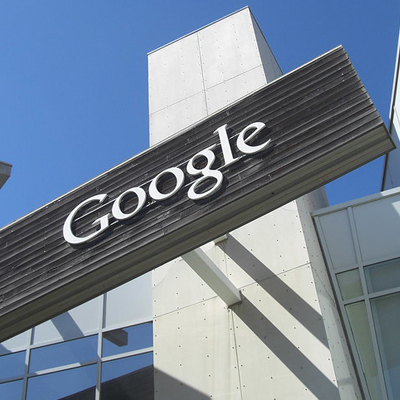 Chris Rufo of the Manhattan Institute has worked with whistleblowers from many corporations to expose internal critical race training. Rufo has now landed the Big Tuna: on Wednesday he exposed Google and its antiracist initiative, which he revealed in City Journal.

According to documents that Rufo received, Google’s program teaches that America is a “system of white supremacy.” Plus, Americans (white, one supposes) raise their children to be racist.

In the foundational training Google employees learn how to deconstruct their sexual and racial identities. They then must rank themselves in terms of “power and privilege.” But no worries — participants learn how to cope with their “reactions to privilege,” which may include “embarrassment, shame, fear, [and] anger.” How do they learn to deal? They use deep breathing, body movement, crying, and even “accessing their happy place” — all with the assistance of “trainers.”

No word if there’s any primal scream or drum circle therapy.

Thus, like military Basic Training, which breaks down recruits to rebuild them as warriors, the Google initiative does much the same. Only it doesn’t teach these employees to love their nation. Instead, they learn to despise her through a series of videos which teach them how America was founded on white supremacy.

They learn through Nikole Hannah-Jones’s historical travesty, the 1619 Project, that the arrival of the first slaves in 1619 surpasses the importance of the Pilgrims landing one year later. Jones also tells the participants that everything in America goes back to slavery. As she says in the video:

“If you name anything in America, I can relate it back to slavery.”

She ends with labeling whites as racist:

Following the Hannah-Jones presentation is a video with Boston University professor Ibram X. Kendi, who further shames the Google employees. He tells them that their babies are, in fact, racist from an early age:

“The youngest of people are not colorblind—between three and six months, our toddlers are beginning to understand race and see race.”

(First of all, babies of three to six months aren’t toddling anywhere. Moreover, infants at that age seek out faces that look most familiar — like their mother’s. It’s called bonding, and racism has nothing to do with it.)

But don’t tell Kendi that you’re not a racist. Because if you’re white, you are:

“For me, the heartbeat of racism is denial and the sound of that denial is ‘I’m not racist.’”

Finally, employees view an internal document that Google created which lists “anti-racism resources.” These contain lists, graphs, and anti-racist exercises. One of them lists examples of “overt” and “covert white supremacy” in a helpful hierarchy: 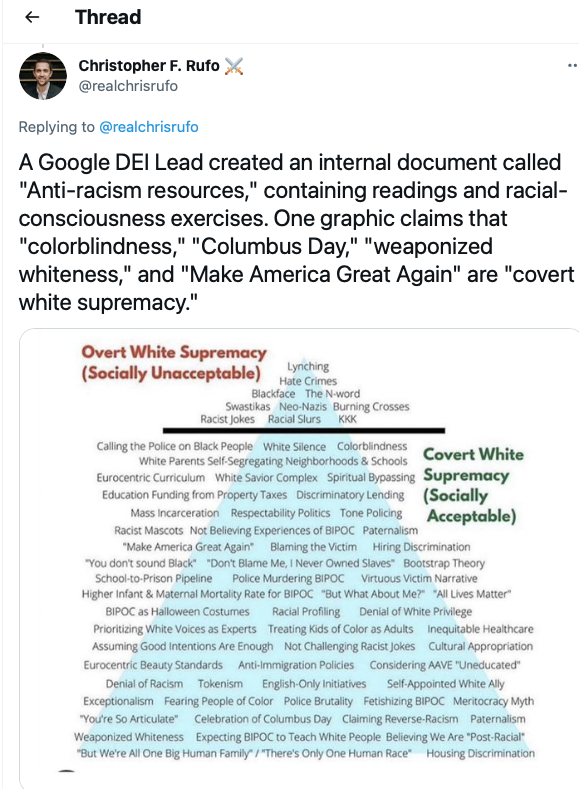 Another graphic shows a “white supremacy” pyramid. Note who’s in the mix: Donald Trump, who according to this graphic is on his way to being genocidal. 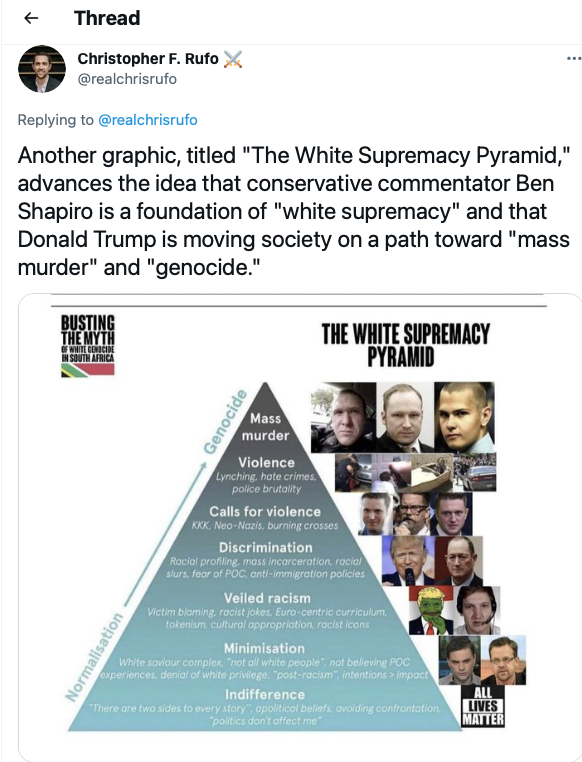 Chris Rufo appeared on Fox News Primetime to explain what he found at Google. I don’t know if any other news outlets will interview him, but I’m sure CNN has no interest in reporting this. Never mind that this is major news about a Big Tech powerhouse.

But you know that Google and its Big Tech allies won’t take this exposé by Chris Rufo without striking back. And strike back they did.

Rufo reported that earlier in the week Google sent him an alert about a “government-backed attack” on his email system. He also posted that Twitter had unverified his account, removing the coveted Blue Check. All this happened as Big Tech caught wind of his investigations. Coincidence? I think not.

In the past week, Google has sent me an alert about a "government-backed attack" against my email system and Twitter has unverified my account—just as I began my investigative reporting on critical race theory in Big Tech.

Strange timing, to say the least.

Glenn Greenwald called Twitter’s action “a bizarrely punitive use of that designation — which is supposed to just authenticate identity — but one apparently loses it by reporting.”

But this isn’t the first time that Google and its Big Tech allies have punished voices which don’t align with their narratives.

For example, in July, 2020, Google blacklisted the conservative websites Breitbart, the Daily Caller, Infowars, Human Events and Red State. They poof! disappeared for a time from search results.

In October, 2020, when epidemiologists Jay Bhattacharya (Stanford), Martin Kulldorff (Harvard), and Sunetra Gupta (Oxford) criticized Anthony Fauci’s lockdowns and proposed alternatives in their Great Barrington Declaration, Google censored it. If you looked for it on Google’s search engine, you couldn’t find the original document, but you could find plenty of critics blasting the Declaration. However, if you looked on the search engine Duck Duck Go — there it was, at the top of the page.

Google has since corrected this. However, its subsidiary, YouTube, recently suspended Sky News Australia for one week. According to YouTube, Sky News was promoting Covid misinformation. But as Michael Koziol of the Sydney Morning Herald wrote:

“But is it dangerous enough to be banned? And in a sea of misinformation and competing claims related to COVID-19, who gets to decide which contentions and opinions get censored and which are disseminated to the public?”

Perhaps the ultimate wielding of Big Tech power came in January, 2021, when both Twitter and Facebook took down former President Trump’s accounts. Yet Twitter allows the Taliban to maintain its presence. Go figure.

Chris Rufo, however, hit too close to home with his exposé of the racial indoctrination program going on at Google. Therefore, they must intimidate him into silence. I don’t think Rufo will shut up anytime soon, but this incident shows yet again how Big Tech has become Stalinesque in its desire to control speech.