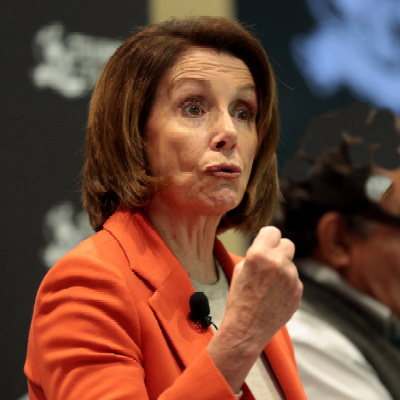 During her weekly press conference, Speaker Nancy Pelosi praised Joe Biden’s withdrawal from Afghanistan, although, she said it did get off to a “hazy start”. In the pantheon of Pelosi’s purblind utterances, this one has to be at the top of heap.

Nancy Pelosi is the female version of Joe Biden. She has risen to the top of the American political system without any discernible intelligence or talent. She and her family have made boodles of money off of insider information and name trading. Neither Pelosi nor Biden care a whit about our Republic. They only care about money and power, and crushing the opposition. Both of them have a casual relationship with the truth. And, they both love them some ice cream.

The people who populate the world they rule are of little consequence to Biden and Pelosi. The world outside of the D.C. bubble is “hazy” to them. Joe Biden can break every rule of a sovereign nations and war-fighting by giving up the base in Bagram. He can leave the Afghan people virtually unprotected and women out on a limb and at the mercy of the Taliban. Nancy then says she is “deeply concerned” about Afghan women and her job is done. She dusts off her hands and moves on. Her job is done. Like some absolute monarch, she need do no more.

Still, as much as we know about how callous Nancy Pelosi really is, it was stunning to hear the words “hazy start” come out of her mouth to describe Joe Biden’s Afghanistan withdrawal.

Nancy Pelosi lauded on Wednesday the Biden administration’s handling of the bungled Afghanistan withdrawal by claiming it was ‘remarkable’ despite a ‘hazy start.’

‘The historic evacuation of 120,000 people was remarkable and I commend the administration for that. This is never easy – that’s not always complete from the start,’ the House Speaker said during a press conference on Wednesday.

‘But it was remarkable even though it got off to a hazy start,’ Pelosi added. ‘And now we go forward.’

Several polls of U.S. voters show that somewhere between 30-40 per cent approve of Biden’s handling of the withdrawal and chaotic scenes in Afghanistan once the Taliban starting seizing the country in August.

The president’s approval rating has also suffered, dropping nearly 10 points in several key swing states and dropping below the 50 per cent mark for the first time in his presidency last month.

Pelosi’s messaging Wednesday praising the administration in such an obvious botched withdrawal could be a response to reports that the Afghanistan mishandling has just further emboldened former President Donald Trump to want to run against in 2024.

Nancy Pelosi has better things to do than rig elections in 2022 and 2024. Someone has to write a note to the personal assistant to remind her to order more ice cream and have one of the maids restock the Sub-Zero. Nancy also has more maskless, fancy fundraisers to preside over. Why don’t you people move on?

Sure there are Americans left in Afghanistan. They will fade from the news as soon as “you people” stop talking about them. So what if the State Department is throwing up roadblocks to prevent Americans and those who aided us from getting out of Afghanistan. Pivot.

I don’t want to belabor the point. But, let us remember that the 120,000 evacuation wouldn’t have been necessary if Joe hadn’t effed up so badly. And, those 13 dead military personnel?

Stuff happens when you have a hazy start. Pivot, people. Oh, no, Queen Nancy. We will not pivot. It’s not hazy at all to most of us.