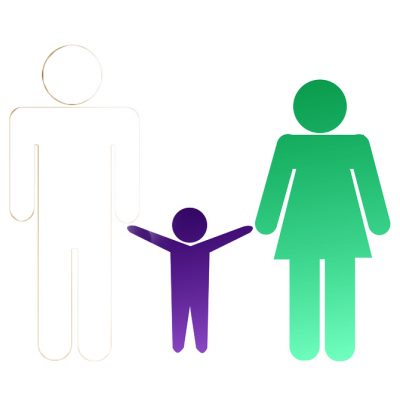 Previous post
Choosing the 'race' of her child? That is the least of this woman's problems [VIDEO]

California Teacher and City Councilman: “U.S. Military Members ‘The Lowest of the Low'” 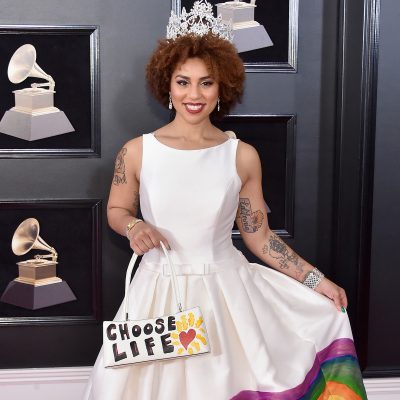 Next post
#Grammys: Joy Villa Goes Against The Current Again

California Teacher and City Councilman: “U.S. Military Members ‘The Lowest of the Low'” 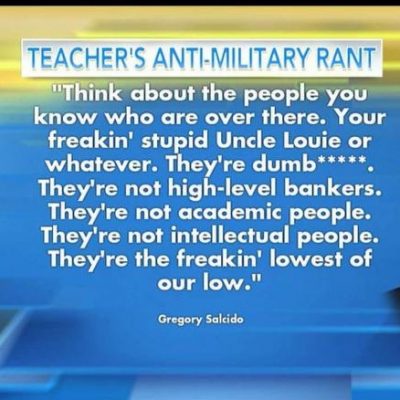 by Lisa Carr in military 6 Comments

This is what tax dollars get you in California. Gregory Salcido, a California high school teacher and local politician is being investigated after a student clandestinely recorded his apparent anti-military rant. Take a listen (language NSFW):

“Think about the people you know who are over there [in the military]. They’re your freaking stupid Uncle Louie or whatever.

The El Rancho Unified School District said they are conducting an investigation. Back in 2012, Salcido was placed on administrative leave for slapping a kid in his classroom claiming he “just wanted to wake him up”.

As for those sounding off on Salcido’s idiotic rant, here goes:

My uncle says thank you from the grave. My friend who is currently deployed & has a BA, JD, & a Masters in Public Health from UCLA, thanks you, @gregorysalcido. Proceed w/ your first amendment right, thanks to these “dumbshits.” @ElRanchoHS @ABC7 @KTLA https://t.co/KmdvyGQm7r

He’s a teacher, and it appears a former Mayor in California. I’m a veteran, as is my husband. This guy wouldn’t last 2 mins on a battlefield. It’s a shame he’s lasted that long in a classroom. MM https://t.co/F2GJiV59dx

These people have no other options, he says. They are the lowest of the low. Funny, but I thought the “lowest of the low” was a Democrat politician such as the likes of Salcido. He likens Armed Forces recruiters to pimps and enlistment as a form of prostitution. So, Mr. Salcido, allow me to enlighten you. My husband’s story with the United States Marine Corps is a 23 year-long one. He had other options but he wanted to fly. He DID go to college and as a result of obtaining a degree, was able to advance and fly multiple multi-million dollar pieces of machinery. If you have ever looked through a Naval Aviation Training and Operations Procedures Standardization (NATOPS…AKA a flight manual), you would know it takes some level of brain power to get through this stuff. He now flies passengers around (one of his “dumb s#-T buddies” perhaps flew you and your precious family to your vacation destination) and is responsible for the lives of up to 215 passengers on a Boeing 737 on each flight but yeah, right, he had no other options. When he left to deploy to the Middle East multiple times, he had other options. He could have gotten out at any time. But he chose to stick it out and make it a career. While you were in your dorm room at Whittier playing beer pong and perhaps partaking of some wacky weed, he was in the Gulf. While you and your beloved had a wedding and legitimate honeymoon to follow said wedding, we were saying our vows in a magistrate’s office at city hall and going off to pre-deployment briefs. While you were home safe and home almost every night for your wife and for your child’s first year, he had to deploy and miss 6 precious months of our son’s first year. There are other Marines in our extended family who have gone through similar circumstances. These Marines had other options but chose the Corps. They possess a wide range of practical skills-from technical to managerial and yes, quite a few are very well-versed in history and the liberal arts. And, when some go off to foreign soil to live in a tent and have bombs thrown at them, sometimes the “Stupid Uncle Louies” of the military need to not only be fluent in Farsi but also Pashto and they may need to throw a little Arabic peppered in with some Urdu. How many languages do YOU speak?

So while, these kids are protesting, looking for safe spaces, denouncing Trump as their president, war, rape culture, wanting free college and free birth control and taking classes at colleges that do not believe in giving grades because it “hurts these kids feeeewwwings,” like these winners:

The “dumb Jarheads” will continue to fight for your miserable existence, Mr. Salcido. As far as “the lowest of the low” and “no other options” (besides Mom’s basement) go, I would love to chat with our little “resistance babies” you are attempting to indoctrinate when they complete their liberal arts college education. So yes, Greg Salcido, like you said in your tirade, you can B.S. yourself all you want. I secretly pray that your when your child turns 18, he brings home a female Marine.