Next post
Lawyers, Guns, and Money - How School Boards Wield Their Power Around Mask Mandates 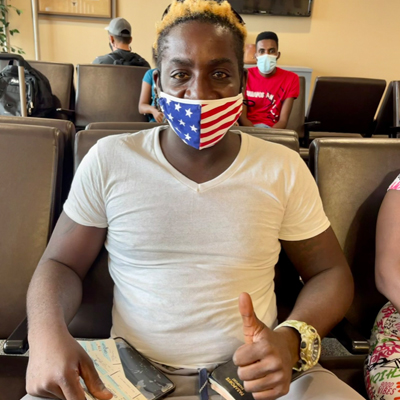 Well, who had this on their Bingo board? Joe Biden has such a catastrophe on his hands at the Texas border that his administration is now checking out Guantanamo Bay, and not for a vacation spot, either.

As Joe says, here’s the deal: the Department of Homeland Security is looking for a contractor. Job description: to run a migrant detention facility. Requirement: must employ guards who speak Haitian Creole.

Gee, I wonder why?

However, DHS did dismiss any notion that reopening parts of Gitmo would involve housing Haitian migrants from the Texas border. Oh, heavens, no! The agency told NBC News that it “will not send Haitian nationals being encountered at the at the southwest border” to that facility.

Right. And butter doesn’t melt in your mouth, either. Then why does the proposal read like this:

“The service provider shall be responsible to maintain on site the necessary equipment to erect temporary housing facilities for populations that exceed 120 and up to 400 migrants in a surge event.”

The contract also calls for tents and cots, and “the contractor must be able to have these assembled and ready with little notice.”

And finally, here’s the kicker:

“At least 10% of the augmented personnel must be fluent in Spanish and Haitian Creole.”

The things that make you go wait, what?

File under “imagine if Donald Trump had even tweeted this idea.” https://t.co/7BxUWTJaVR

So why would Joe Biden even consider such a Trumpy thing? After all, he’s been promoting immigration for a long time. In fact, in 2015, as Vice President under Obama, Biden made these remarks:

“Folks like me who are Caucasian, of European descent, for the first time in 2017 we’ll be in an absolute minority in the United States of America, absolute minority. Fewer than 50% of the people in America from then and on will be white European stock. That’s not a bad thing, that’s a source of our strength.”

(He didn’t mention, however, anything about employees at Dunkin’ Donuts with slight Indian accents.)

But the bumbling Biden knows that he owns that hot mess in Del Rio, and perhaps — perhaps! (she says with fingers crossed) — he’s finally realized that Trump’s tough measures worked. Or, more likely, Biden is seeing his polls tank; his approval in the important swing state of Iowa has dropped to 31%.

So now the Biden administration is using Border Patrol agents to clear out the 15,000 Haitian migrants from their makeshift camps. As of this writing less than 5000 remain.

3,206 have been moved out of Del Rio sector. No indication how many released vs still facing T42 expulsion.

But what about all those that weren’t deported?  Where did they go? Well, according to one anonymous official, they’ve been released into the US on a “very, very large scale.” He put the number in the thousands, in fact. That means it’s catch-and-release, sports fans!

However, if even one Haitian gets deported, that’s one Haitian too many for some Democrats and immigration proponents. As activist Marisa Franco sarcastically remarked:

“The question that’s being asked now is: How are you actually different than Trump? You campaigned that immigration was one of the places where Trump was inhumane and failed. And last time I checked, Trump is not the president.”

Avril Benoit of Doctors Without Borders condemned the Biden administration for forcing the Haitians out of the US:

“When people are seeking safety in the U.S., putting them onto planes and forcing them into this context is beyond inhumane.”

The media also chimed in, like the New York Times which said that clearing out the migrant camp was much too Trumpian for their sensitivities:

And, of course, some House Democrats threw down the race card. Like Squad gal Rep. Ayanna Pressley (D-MA) who said at a Wednesday presser outside the Capitol:

“The Biden administration must immediately and indefinitely halt deportations. We have a moral obligation to lead with compassion. Haitian lives are Black lives and if we truly believe that Black lives matter, we must reverse course.”

Because the Border Patrol are racists or something.

This is the ⁦@CBP⁩ I know. Outmanned and overwhelmed – but doing the Lord’s work, not the BS lies being pushed by ⁦@PressSec⁩ of @joebiden. #NationalBorderCrisis pic.twitter.com/4oAUbF6AJ6

Also on Wednesday Reps. Bennie Thompson (D-MS) and Gregory Meeks (D-NY) called for the Biden administration to “halt repatriations to Haiti until the country recovers from these devastating crises.” The crises would be a presidential assassination in July and an earthquake in August. That recovery, of course, will never come soon enough to satisfy these two.

And now Al Sharpton plans to tour the migrant camps on Thursday to “investigate” the Border Patrol. Investigate? Sharpton won’t be investigating, his MO is instigating.

No wonder the DHS denies that opening part of Gitmo is for Haitian migrants. Talk about excrement hitting a fan that’s whirling at high speed.

Joe Biden may be dumber than a bag of hammers, and whatever cognitive abilities he ever possessed are fading fast. But his political instincts remain, and he knows that the border problem must be fixed, and fixed fast. He has to make this issue go away. Otherwise it’s Doomsday for his party in 2022.