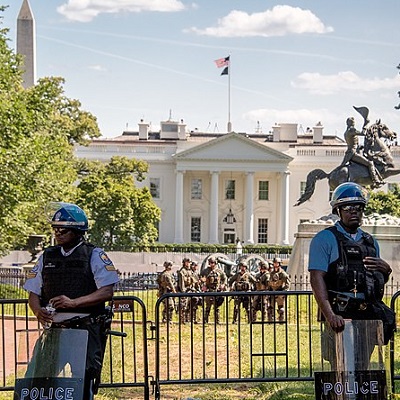 by Shelby Gallagher in Everything Else 4 Comments

Black Lives Matter rioters just got a taste of their own medicine Monday. For the past year the violent, assaulting, rioters have enjoyed enacting violence in leftie blue cities with impunity. They have enjoyed clogging the legal system by suing every government official who dares spritz a BLMer with pepper spray.

“A federal judge on Monday dismissed the bulk of a set of lawsuits filed by protesters whom law enforcement had cleared by force from Lafayette Square during Black Live Matter demonstrations outside the White House last year.”

Oh but wait, it gets better. Cops have been leaving precincts in droves this past year seeking early retirement, moving laterally to other pro-police jurisdictions, and getting the hell out of violent blue cities where they are being put on the front lines of riots with their hands tied behind their backs. Leftie blue cities have also been removing qualified immunity privileges to officers. So not only are officers getting beaten silly on the streets, but they are also losing the fight in courts when BLMers and Antifa find any slew of legal sympathizers to take an officer to court.

Not only did Judge Dabney Friedrich throw out most of BLM’s lawsuits, he

“…ruled that former Attorney General William Barr and other current and former officials named in the suits are entitled to qualified immunity over their actions during the June 1, 2020, protests.”

“Today’s ruling essentially gives the federal government a green light to use violence, including lethal force against demonstrators, as long as federal officials claim to be protecting national security…Under today’s decision, Lafayette Square is now a Constitution-free zone when it comes to the actions of federal officials. Not only is this decision a stunning rejection of our constitutional values and protestors’ First Amendment rights, but it effectively places federal officials above the law.”

Seems like BLM likes to use qualified immunity to their advantage when they are beating on cops, but didn’t like it when that little trick was taken away. Good.

The playbook of BLMers is simple. Create violent chaos in cities where leadership is at least progressive if not Socialist. Portland, Oregon experienced well over one hundred days of unimaginable rioting that resulted in millions in damages, hundreds of injured officers, and countless arson fires targeting federal and local government agencies. Flip the page to the playbook showing that BLMers in these cities must have a George Soros funded district attorney who will prosecute a scant few of the hundreds of violent crimes BLM commits, as is the case in the infamous Portland, Oregon rioting summer of 2020. The city must also have a Trump-hating, leftie mayor.

In this whole sordid riotous mess, the narrative from the violent rioters is to blame the police for being violent. You can’t make this up.

Watching footage from riots in Portland–or anywhere BLM and Antifa are rioting–and the June 1st D.C. riots, there are very few things that are different. Warning: the following content is violent.

One difference between the D.C. riots and other cities police officers in Portland are milling around afraid of being assaulted, punched, and being sued later if they dare assert themselves like D.C. police did.

One bright bulb, recently a rioter was sentenced to five years in prison for lighting fires in Portland. Seems a little late and quite frankly, dumb, considering that is one arson fire in the hundreds set by dozens of rioters last summer.

The environment BLM likes to play riot on allows a very predictable sequence of events; set fires, get arrested, take a trip to the precinct, eat a meal, be released, lather, rinse, repeat. One can only imagine when they showed up on June 1, 2020, to riot at the gates of the White House, knowing D.C.’s mayor is cut from the same cloth as Portland’s mayor…the legal terrain would be the same. Get arrested, take a trip…yada yada yada.

Until today. The ruling today set a precedent and, here’s hoping, gives officers and officials a new play book.

Take a closer look at any footage coming out of a BLM or Antifa riot. This isn’t a few busted windows, punching a few people and everyone-goes-home kind of riot. Watch again, BLM and Antifa rioters have no filters, no moral compass and are fighting a ground war. They are committed and doing it until the war is over. Until metropolitan leaders understand that war is being conducted on their streets and start treating these rioters like the war mongers they are, the war will continue. A federal judge seems to get it.