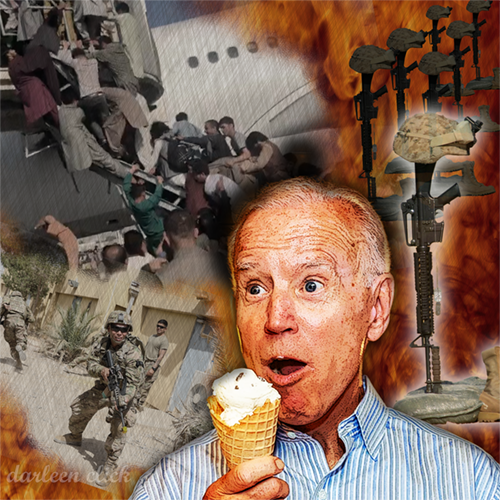 One year later the Afghanistan withdrawal debacle that stranded Americans and interpreters and left 13 American soldiers KIA and multiple others injured, is memory-holed by the Biden Administration.

You see, even with the new issues of terrorists finding safe haven in Afghanistan and the Taliban going back to it’s old ways of forcing women and girls to wear burkhas and keep them from attending school or holding down jobs, the Biden Administration hopes we will forget the months-long debacle that took place one year ago. Instead, we need to be concerned only with China.

In a recent closed-door meeting with leaders of the agency’s counterterrorism center, the CIA’s No. 2 official made clear that fighting al-Qaida and other extremist groups would remain a priority — but that the agency’s money and resources would be increasingly shifted to focusing on China.

One year after ending the war in Afghanistan, President Joe Biden and top national security officials speak less about counterterrorism and more about the political, economic and military threats posed by China as well as Russia. There’s been a quiet pivot within intelligence agencies, which are moving hundreds of officers to China-focused positions, including some who were previously working on terrorism.

Intelligence officials stress that the counterterrorism fight is hardly being ignored. Just a week ago it revealed a CIA drone attack killed al-Qaida leader Ayman al-Zawahri in Kabul. But days later, China staged large-scale military exercises and threatened to cut off contacts with the U.S. over House Speaker Nancy Pelosi’s visit to Taiwan. It underscored the message CIA deputy director David Cohen had delivered at that meeting weeks ago: the agency’s top priority is trying to understand and counter Beijing.

Read the above again. Instead of keeping eyes on multiple issues around the globe, and believe me, Afghanistan IS an issue, the intelligence community is shifting assets around to focus more on China than anything else. Don’t get me wrong, China IS a threat. We’ve known that even before the damned Covid virus hit the world.

However, remember what happened prior to 9/11? We had our intelligence community both fighting amongst themselves AND ignoring very real threats because the focus was on other things. In my view, it’s putting us in danger to move all our intelligence assets into one basket.

That said, we are one year out from the Afghanistan debacle. Has the Biden Administration learned anything? Given how much money is being shoveled into Ukraine with little to no oversight, I’d say no, they have not.

Since that time, Ohman says delivery has improved. Additionally, the U.S. military has confirmed that defense attaché Brigadier General Garrick M. Harmon arrived in Kyiv in August for arms control and monitoring. https://t.co/gltKtScjuB

Billions of U.S. taxpayer dollars are floating around Ukraine and it takes until THIS month for oversight to arrive and figure out of the money is being spent appropriately?? Want to know again why the withdrawal in Afghanistan was a train wreck on all levels? Look at how the Biden Administration is mishandling Ukraine, China, and Russia. Plus with the military “leadership” focusing on Woke crap and pronouns, no wonder last August’s withdrawal was handled so badly! Our troops on the ground and Americans living and working there were left twisting in the wind.

Oh but wait, suddenly David Petraeus is chiming in.

Moreover, the ultimate peace deal that we reached with the Taliban in 2020 that committed the U.S. to withdrawal the following year, which we negotiated without the elected Afghan government at the table, has to rank among the worst diplomatic agreements to which the U.S. has ever been a party. We acquiesced to Taliban demands because the resulting agreement gave us, in the narrowest sense possible, what we wanted: a defined timeline for our departure and a Taliban promise not to attack our forces (which was already quite difficult to do as, by that point, American soldiers were seldom on the front lines) in the interim. Of course, our enemies knew we wanted to leave, because our leaders had repeatedly expressed that desire. And knowing that, the Taliban realized they had to give up little of value in return. In fact, to induce the Taliban to agree to what they wanted—our departure—we forced the Afghan government to release more than 5,000 Taliban detainees, many of whom quickly rejoined the Taliban’s ranks and helped enable the offensive that toppled the Afghan government after our forces withdrew. The timeline that had the U.S. withdrawing during the height of the fighting season was a major mistake, as well.

Remember, the Taliban gained millions in weapons and equipment after Biden’s ham-handed withdrawal was finished.

What did Joe say a year ago?

Except the Taliban DID takeover the country and the government, and they did so as soon as our troops were gone. Now, in recent days we have the Taliban issuing warnings to Biden and demonstrations that include chants saying ‘Joe Biden, stop lying.’

One year ago, everything went FUBAR in Afghanistan.

8 days later Kabul would fall to the Taliban. pic.twitter.com/vXTKPNcDaL

Yes, we all know how effective the State Department was in getting personnel out of the country safely.

One year later, it is still unequivocal fact, the Biden Administration is solely responsible for how horrendously bad the Afghanistan withdrawal was. The buck stops with Joe Biden on this. Period.