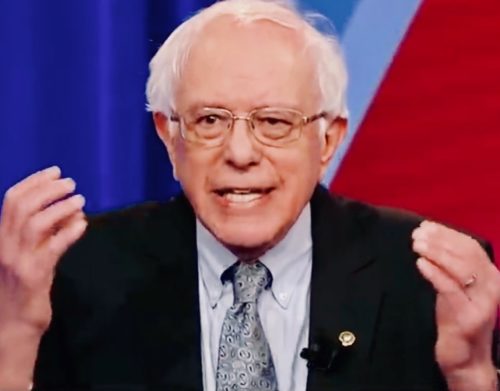 Bernie Sanders wants every vote he can get. Even the criminals deserve to check that box for him on Election Day! Hence his cutesy little op-ed in today’s edition of USA Today. Bernie is here to tell us that even the worst criminals should get to vote and we shouldn’t be concerned with the crimes they committed.

“Our country has had a long and shameful history of voter suppression. At our founding, despite rhetoric to the contrary, only land-owning white males were given the right to participate in our democracy. Lower income people, Women, Native Americans, African-Americans, and young people were excluded.”

Boy, that checked all sorts of boxes didn’t it. Guess what? Lower income people NEVER lost their ability to vote. If they didn’t vote, it was by their choice. As for women, Native Americans, and African-Americans…we rectified that situation quite a number of years ago. As for young people being excluded? I’m here to tell you that I’m totally fine with keeping the voting age at 18. Although, given how childish many between the ages of 18-25 are acting in college, I’m not sure I’d want their vote!

Bernie doesn’t care that some of the worst criminals and terrorists are in prison for horrific crimes. He doesn’t care who committed what crime. He just wants their vote.

“If we are serious about calling ourselves a democracy, we must firmly establish that the right to vote is an inalienable and universal principle that applies to all American citizens 18 years and older. Period. As American citizens all of us are entitled to freedom of speech, freedom of religion, freedom of assembly and all the other freedoms enshrined in our Bill of Rights. We are also entitled to vote. Yes. Even if Trump’s former campaign manager and personal lawyer end up in jail, they should still be able to vote — regardless of who they cast their vote for.”

Bernie, for the umpteenth time I’m here to tell you, WE ARE A REPUBLIC!!

Secondly, our Constitution already gives us all the freedoms you list. Which means no one’s vote is being suppressed unless that citizen chooses not to vote.

You know what? I could care less what other countries do in allowing criminals to vote. That is THEIR choice. If one to break the law here and is imprisoned for it, or tries to destroy the United States through terrorism in any shape or form, then your consequence should be that of losing your voting privileges. Period.

This isn’t about advocating for the little guy or trying to help those who are disenfranchised.

Nope, this is about Bernie hoping to rake in the votes so the demented elf can finally prevail after Hillary shanked his chances in 2016.

Bernie thinks this op-ed will get him traction. Sadly it will from those who believe he’s THE BERN! and refuse to understand that his brand of Communist Socialism would kill this Republic.

As for him believing that everyone is on board with his grandiose voting plan?

“The vast majority of Americans — roughly 75% — do not support Sen. Bernie Sanders’ proposal to enfranchise all prisoners, but many are open to giving voting rights to non-violent inmates, according to a new INSIDER poll.

Only 15% of respondents said all prisoners — regardless of their crimes — should keep their voting rights while behind bars. Meanwhile, 20% said only voters convicted of non-violent offenses should be allowed to vote.”

Hoo boy, that’s gonna leave a major mark. This poll will as well.

47% of black women likely to vote in the Democratic primary have Joe Biden as their first choice. Bernie Sanders is in second place with 18%. Kamala Harris with 9%. pic.twitter.com/ZYCumBk1LM

Alexis de Tocqueville warned us about people like Bernie Sanders a long time ago.

“The American Republic will endure until the day Congress discovers that it can bribe the public with the public’s money.”

Bernie’s brand of socialism includes letting criminals vote. This is not how our Republic was designed. If Bernie so desperately wants the criminal vote, then he should go back to Russia and run for Putin’s seat.