Next post
The Far Left Is Everyone's Enemy, Not Just Eric Adams' 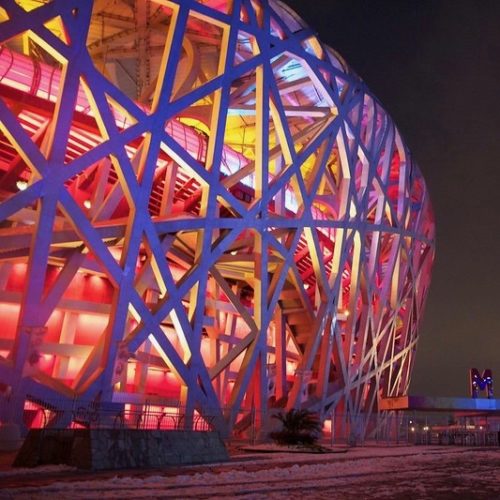 At this point in the game, you may be starting to wonder why on Earth would the International Olympic Committee hold firm on the Winter 2022 Olympics in Beijing? Let alone, why would U.S. Sponsors put their name out there for all to see in Beijing?

Oh, they sing. They dance. They watch Xi Jingping give a speech, all in the name of “re-education”. But they don’t call it that. They call it “skills training”. Rights groups, researchers, former residents and some Western lawmakers and officials say Chinese authorities have detained around a million Uyghurs and other primarily Muslim minorities in camps. Shaved heads. Being lead off trains to large complexes to “work”. Sterilizations and IUDs. Sounds a lot like forced labor and genocide to me.

But Coca-Cola, Airbnb, Intel, Visa and Procter & Gamble are still amongst the sponsors on the roster for the 2022 Beijing Winter Games.

Yesterday, at a bipartisan Congressional panel, Congressman Chris Smith (R-New Jersey), who was sanctioned earlier this month by the Chinese government, sounded off at the second portion of this hearing:

(For) let’s be very clear what we are talking about here, and why multiple hearings and concrete action on this topic are called for—first and foremost, we not only see genocide and concentration camps directed against Uyghurs and Kazaks in the Xinjiang Uyghur Autonomous Region in particular, but also the ongoing eradication of the culture of Tibet, the harvesting of organs of Falun Gong practitioners, the destruction of Christian churches, and the dismantling of freedom in Hong Kong.”-Chris Smith

Why was Chris Smith sanctioned? Because his actions (along with those of Ted Cruz and Marco Rubio) “seriously interfered in China’s internal affairs, seriously violated the basic norms of international relations and seriously damaged Sino-U.S. relations.” This, according to Chinese Foreign Ministry spokesperson, Hua Chunying.

Apparently, questioning labor camps and genocide is considered “interfering in China’s internal affairs”? Large American sponsors sent representatives to this hearing yesterday. When asked about the U.S. government determination that China was committing genocide against Uyghurs and other Muslims minority groups, only Steve Rodgers, executive vice president and general counsel for Intel, said he believed it. Coca-Cola’s global vice president for human rights Paul Lalli, on the other hand, said this:

We do not make decisions on these host locations. We support and follow the athletes wherever they compete.”-Paul Lalli

Coca-Cola: We stand up for what is right across the world.

Also Coca-Cola: We will not condemn the Chinese Communist Party for committing genocide, and we will support the Winter Olympics in Beijing. pic.twitter.com/9C56MJJYe8

Airbnb sounded off as well:

In China we are required to follow local laws and regulations…Human rights are core to our values.”-David Holyoke, Airbnb

We pledge loyalty to the CCP!

There are laws, they say. That’s nice. They’ve also signed a contract, I’m sure. And, hey, business is booming for Airbnb as people are starting to come out from COVID hibernation and are going on well-deserved vacations. Gotta keep their name out there, I suppose. Have to encourage those nice getaways with the family after being “all in this together” on lockdown thanks to a virus that may or may not have leaked from a lab in, (ahem) CHINA. Speaking of families…

China appears to be trying to stifle Uyghur births so as to dilute the Uyghur population in a sea of Han Chinese. Officials have spoken of the need to “change southern Xinjiang’s population structure” and “end the dominance of the Uyghur.”

The result has been a campaign of forced sterilization and IUD insertion. Some 80 percent of China’s IUD insertions have been in Xinjiang, home to less than 2 percent of the country’s population, and population growth rates in the two largest Uyghur prefectures fell 84 percent, according to Adrian Zenz, a scholar who has documented a brazen Chinese government plan to suppress millions of Uyghur births in the coming years.

Muslims are forced to betray their faith by eating pork or drinking alcohol, prayer is banned in public places, kids are sent to boarding schools to be indoctrinated, and when Uyghur men are jailed the government has sent Han Chinese men to live in their homes and share beds with their wives.”-Nicolas Kristof, The New York Times

The liberal media outlets are even bringing these stories to light. Hell, senile old Joe Biden’s administration agreed with a determination by the former Trump administration that the detention camps and other abuses in China amounted to genocide. But, 2022 Winter Olympics sponsors remain seemingly ambivalent to the atrocities happening in China. They support the athletes, wherever they are competing and whether they are supporting our country when our anthem plays or not. They can throw all of the woke they want in our faces because they, as organizations, are so accepting and inclusive and non-prejudiced. Certainly, they don’t discriminate. Especially when it comes to the Almighty Dollar.

The human atrocities and lack of compassion for a cultural group in China were not factors in these sponsors’ decisions to hop on board the Beijing bus in 2022. Let’s get this elephant out of the room. This is not about Asian hate here. But, where, exactly, did the Coronavirus originate again? Can anyone enlighten me?

Explain to me why, after locking many countries down (not just ours), and slowing many economies down with the unleashing of the COVID-19 pandemic, does China get to host anything and reap the economic rewards from an event such as the 2022 Winter Olympics? How many elderly people here in our country (and others) died as a result of complications from COVID-19? Let’s not mention the loss of livelihoods of some, the return to drug addiction for others, depression, and the fact that some children in our nation missed out on a whole year’s worth of classroom time all because of a virus that came FROM CHINA. And while we were told to lock down for our 2020 holiday season, China returned to what looked to be normal and had their New Year’s celebrations with crowds and crowds of people. I remember watching it from my couch with my family, nursing one hell of a COVID headache and chugging the Thera-flu on New Year’s Eve. COVID caught up to all of us and we all were quarantined to our home because we all had a virus that came from China.

I remember thinking, “ain’t this a kick in the pants?”

Beijing will host the Winter Olympic Games in 2022. The city and China, as a whole, will benefit from tourism. The producers of the Olympic Games will no doubt highlight the beautiful and wonderful aspects of their host country while blissfully ignoring the atrocities that lie under the surface. Meanwhile, back in America, we’re still recovering.

In some respects, there is no going back. We are politically altered and forever changed. According to some, we’re the hateful, racist xenophobes who blamed a country that has been less-than-tranparent with us for years before the “Bat Flu” came to pay us a visit. We’re the greedy Capitalists who wanted to see our small businesses stay open and wanted our economy to get up-and-going again.

Be less white (and shut the eff up), they say.

Why are they telling us this? Because human rights are CORE to their values, say these sponsors of the 2022 Beijing Winter Games. Next up, Woke-a-Cola offers up classes in the differences of between being less white and being less Uyghur.