Next post
Saule Omarova: Thief Who Wants To Confiscate Our Bank Accounts 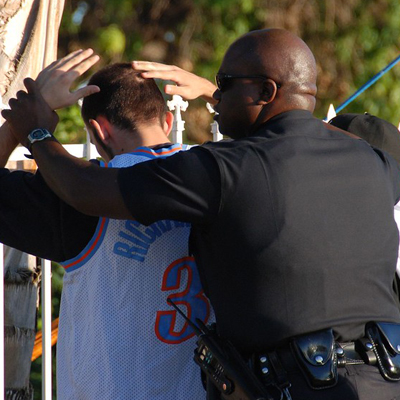 A second day of deliberations came and went in the Kyle Rittenhouse case, and we still don’t have a verdict. But that didn’t stop protesters from roughing things up. There have already been two arrests in front of the courthouse in Kenosha, which means that things will be going sideways quickly in case Rittenhouse is found not guilty on all charges. Or even receives a guilty conviction on a lesser charge.

The arrests came at the end of the afternoon, while jurors were still deliberating. Police arrested a 20-year-old man and a 34-year-old woman. At least there’s gender parity in Kenosha.

However, encounters between the Rittenhouse supporters and BLM started peacefully, over both sides sharing  . . . pizza. I bet you never expected that to happen.

This is what happened shortly before https://t.co/GGbZfHCING

But the Kumbaya moment didn’t last long. Soon the insults and obscenities and fists began to fly, and police swooped in to make arrests.

MULTIPLE ARRESTS IN KENOSHA: BLM Protesters clashed with Pro-Rittenhouse protester on the steps, one journalist got punched and two blm protesters were arrested across the street. #HappeningNow #RittenhouseTrial #Rittenhouse pic.twitter.com/CWjTZvxN8z

Plus, Justin Blake led BLM protesters through the streets, chanting, “If we don’t get it, shut it down.” I assume what they want to “get” are guilty verdicts on the homicide charges. And by “shut it down,” I think they want to make Kenosha burn — again.

So who’s Justin Blake, anyway? He’s the uncle of Jacob Blake, the man whom police shot in Kenosha last year for threatening to stab a police officer. That shooting set off the violence in Kenosha in which Kyle Rittenhouse became embroiled.

Justin Blake, Jacob Blake’s uncle, leads a march away from the courthouse following the announcement of no verdict tonight. pic.twitter.com/Lm6CyRcnMi

So let me get this straight: Rittenhouse shot three men, two of whom died, and one who didn’t but claimed on the witness stand that Rittenhouse “vaporized” his bicep. All three men were white, and had criminal records, to boot. But Black Lives Matter have been protesting because they think a white kid who shot three white men should go to prison forever.

Sounds legit. Or not.

But then again, it’s not really about justice at all, is it? Nor does any of this have to make sense. No, it’s all about the narrative, which says that Kyle Rittenhouse is a white kid who supports Trump and police and therefore he is scum.

So who fanned these flames? Look to the media for your answer.

Bari Weiss, a former New York Times columnist, published a brilliant piece on Substack on Wednesday excoriating the media. The media, she says, pushed so many falsehoods about Kyle Rittenhouse that it’s no wonder that “so many got this story so wrong.” In fact, she writes, even she believed the lies.

“Here is what I thought was true about Kyle Rittenhouse during the last days of August 2020 based on mainstream media accounts: The 17-year-old was a racist vigilante. I thought he drove across state lines, to Kenosha, Wisc., with an illegally acquired semi-automatic rifle to a town to which he had no connection. I thought he went there because he knew there were Black Lives Matter protests and he wanted to start a fight. And I thought that by the end of the evening of August 25, 2020, he had done just that, killing two peaceful protestors and injuring a third.”

Despite that fact that media inaccuracies about Rittenhouse have been debunked, CNN reporter Bakari Sellers is still spouting the lies:

“Bakari Sellers still spreading lies #AcrossStateLines 1. His momma did NOT drive him 2. Rittenhouse was NOT the only one to fire shots 3. Rittenhouse did NOT fire the first shot 4. “Protesters” fired MORE shots than Rittenhouse.”

Meanwhile, in the courtroom, confusion increased on Wednesday when the jury asked to rewatch drone footage. The defense team then discovered that the video footage they had received from the prosecution was inferior to the footage the prosecution used; in addition, defense didn’t get the better copy until after the evidence portion of the trial had concluded.

So the defense asked for a “mistrial without prejudice,” meaning that Kyle Rittenhouse could be tried again by prosecutors. However, Judge Bruce Schroeder did not immediately rule upon the request as he had just received it, and he wanted time for comments from the prosecution. Of course, if Rittenhouse is acquitted in the meantime the mistrial issue will be moot.

But if there’s a guilty verdict, then Judge Schroeder will have to review the mistrial request. And if that’s the case, “it’s going to get ugly,” the judge said. There will be more arrests to add to the two made on Wednesday — at the very least. Already there are reports of bricks being piled up in Kenosha, and they’re not for construction, either.

So we wait, and wait, for the verdict. In the meantime, Wisconsin Gov. Tony Evers has activated 500 members of the WI National Guard outside the city of Kenosha. Considering that police already seem to have their hands full controlling the surly mob outside the courthouse, the city will probably be making full use of the Guard should the mob disapprove of the verdicts.

But even with the National Guard on the scene, if Rittenhouse walks then Kenosha will become a redux of Kenosha in August of 2020, and there won’t just be arrests. Buildings will burn once again, business owners will see their life’s work go up in flames, and there may be some dead bodies, too. Only this time the mob won’t be able to blame Kyle Rittenhouse for the carnage.