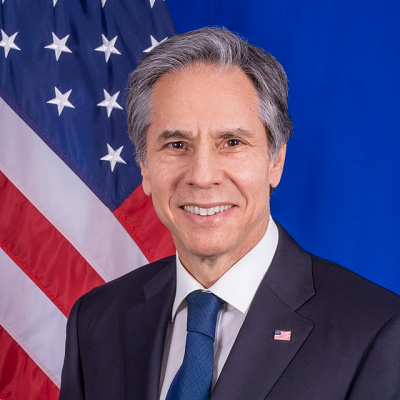 Secretary of State Antony Blinken gave remarks to the press on April 5, 2021 regarding the Biden Regime’s response to Covid-19. In the remarks he said that until the world is vaccinated, we cannot fully open our economy or travel again. The folks that have their grubby paws on the levers of power aren’t going to let go. If the American public had any spine at all, we’d be madder than a dog with a mouth full of bees at those comments.

When last we saw SecState Blinken, he was having his lunch eaten by Chinese diplomats in Anchorage, Alaska. Antony is one of those well-educated-types (Dalton, Columbia, Harvard), who thinks he is the smartest little boy in the room, but can’t score in Hungry, Hungry Hippos.

Like the rest of the denizens of the Biden Regime, Blinken pats himself on the back for all the good stuff that President Donald Trump did to mitigate the scourge of the Wuhan Lung Rot. At the same time, he paints a gloom and doom picture of America at this moment. From his remarks:

Since the United States recorded its first COVID-19 death in February 2020, more than 550,000 Americans have died in the pandemic. More than 30 million Americans have been infected. Millions of Americans lost loved ones, often without having the chance to say goodbye.

No one has been immune to the virus. It’s hit people of color especially hard, devastating communities and deepening our country’s racial and economic divides.

And COVID-19’s massive health and death toll has been matched by its economic and social consequences. Restaurants, bars, movie theaters closed, many permanently. Millions of kids stayed home from school, losing precious classroom time. And millions of women dropped out of the workforce to care for children or aging parents.

Blinken also has the arrogance that we have come to expect from the Left. Check out this line from his presser:

We cannot fully recover – much less build the better future the American people deserve – until the pandemic is over.

Just like Bill Clinton’s “Bridge to the Future”, the future is not up to the Biden Regime. The future comes on its own. Whether it is a good future or ill, it is up to the American people. The only thing any President’s administration can do is get in the way.

This next pull quote from his talk highlights his myopic arrogance:

This pandemic won’t end at home until it ends worldwide.

And I want to spend a minute on this, because it’s critical to understand. Even if we vaccinate all 332 million people in the United States tomorrow, we would still not be fully safe from the virus, not while it’s still replicating around the world and turning into new variants that could easily come here and spread across our communities again. And not if we want to fully reopen our economy or start traveling again. Plus, if other countries’ economies aren’t rebounding because they’re still afflicted with COVID, that’ll hurt our recovery too.

He has lost his ever-loving, durn mind. Look, the hubs and I took MacDuff the terrier to Sonic today. Traffic on Kingston Pike in Knoxville was hellacious. Sonic was crowded, as usual. People are traveling. People are getting their hair done. People are visiting with family. Did anyone from the Biden Regime pay attention to Spring Break last week?

As for the rest of the world, you and what Army are going to hold the rest of the world down and inoculate them, Antony? Unless these people are held in camps, I am pretty sure forced inoculations violate the Geneva Conventions. Not to mention, though I will, there is a whiff of colonialism in that statement.

Here is the video of the full Antony Blinken statement:

There was a perfect moment there for Blinken to thank Donald Trump for all he did:

There is no country on Earth that can do what we can do, both in terms of developing breakthrough vaccines and bringing governments, businesses, and international institutions together to organize the massive, sustained public health effort it’ll take to fully end the pandemic. This will be an unprecedented global operation, involving logistics, financing, supply chain management, manufacturing, and coordinating with community health workers who handle the vital last mile of health care delivery. All of that will take intensive diplomacy.

What makes this really interesting is that last May, Blinken wasn’t so keen on America’s leadership in developing and producing a Covid vaccine:

Look, we’re ultimately all in this together, and we’re only going to be strong, as strong as the weakest link in the chain. So there are strong incentives for countries to figure out who the most vulnerable populations are, how we can deal with them, how we can help treat them. I also think that a multiplicity of efforts at a vaccine is probably a good thing because whoever is quote unquote first may not be so fast in producing whatever they develop and then distributing whatever they develop. And I think a lot of hopefully multiple things will come on line. More or less in the same time period. And that’s going to be very valuable, everyone. But it really does require some international thinking and cooperation and coordination to figure out the most effective way to maximize our ability to get people vaccinated when the vaccine is there, to get things manufactured, to get things distributed. There is. You know, Margaret, there are different components that go into every aspect of the vaccine. It’s not just the vaccine itself. It’s the it’s the glass. It’s the swab. It’s the syringe, the whole thing. And the supply chains are pretty complicated. So there’s going to be a real incentive in figuring out ways to maximize the speed at which we’re able to produce and distribute whatever finally emerges from the best medical minds.

I am willing to bet that Antony Blinken couldn’t define supply chain management if you paid him cash money. I also bet that President Trump can white board supply chains in his sleep.

It’s stupid frightening that Biden, Blinken and the rest of these Liberal elites think that they can stop us from eating out, having hot dogs and burgers in our backyard with the whole neighborhood on July 4th, or traveling to Edinburgh Castle for the Tattoo in August. Try it, Antony.