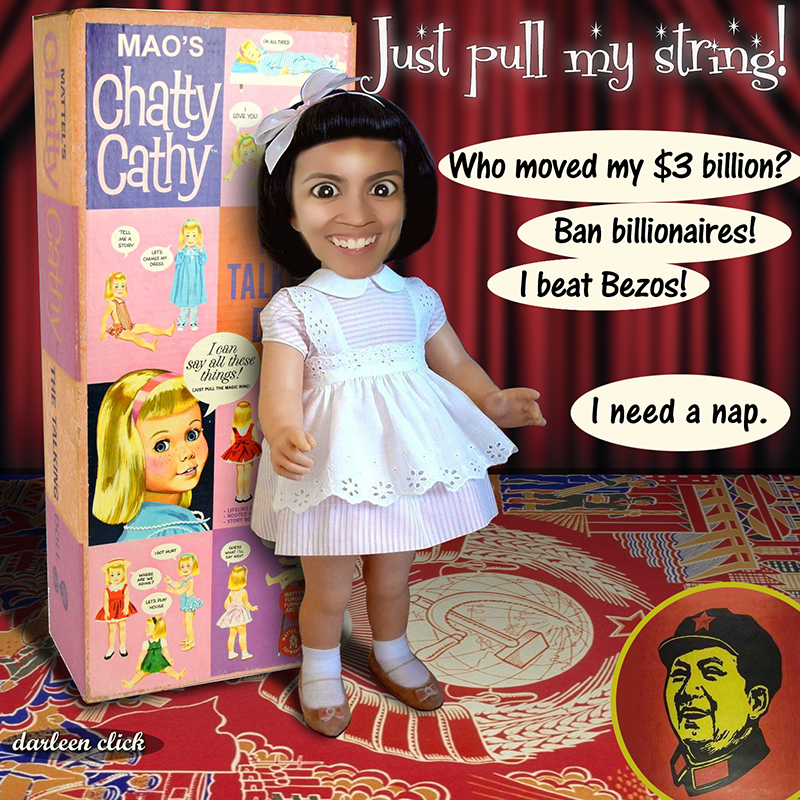 Alexandria Ocasio-Cortez (NY D-ranged) allegedly graduated from Boston University with a degree in economics and international relations. It’s a good thing she’s found a well-paying gig in Congress because her arrogant statements on economic issues disqualifies her from running any business, except into the ground.

Occasional-Cortex is positively giddy over Amazon’s retreat from opening a headquarters in Queens.

Anything is possible: today was the day a group of dedicated, everyday New Yorkers & their neighbors defeated Amazon’s corporate greed, its worker exploitation, and the power of the richest man in the world. https://t.co/nyvm5vtH9k

Far be it for me to stick up for Jeff Bezos, the man. I usually retreat to the kitchen for some more popcorn when it comes to Left-on-Left pugilism. At best, I’m agnostic when large corporations make sweetheart deals with cities and states. It can too easily slide into cronyism where the cost to the communities is more than the benefits. Just look at the history of sports stadiums and high-speed rail.

The package of tax breaks and performance incentives in the Amazon/NYC deal were extensive. However, of the $3 billion dollar figure being bandied about by Alexandria, Elizabeth Warren and others, only $325,000,000 is actual cash.

Alexandria has been in the public eye a relatively short time. However, she’s managed to mangle any number of economic issues. When interviewed about the canceled Amazon deal I was surprised it wasn’t accompanied by the slapping sound of a dozen facepalms.

“The district is now going to lose thousands of jobs that would have come there,” a reporter quietly noted in the middle of Ocasio-Cortez’s celebratory dance.

“Well one of those things is, A) we were subsidizing those jobs,” she said. “The city was paying for those jobs so frankly if we were willing to give Amazon so if we were willing to give away $3 billion for this deal, we could invest those $3 billion in our district ourselves if we wanted to. We could hire out more teachers, we can fix our subways, we can put a lot of people to work for that money if we wanted to.”

As I pointed out above, only $325,000,000 is actual cash. That $3 billion doesn’t exist. It isn’t in a bank account waiting for distribution. It is only the value of the tax breaks and incentives over the course of years. Ironically she wants to use $3 billion in unicorn dollars, in part, to “hire teachers” when the Amazon deal was to bring jobs, tax revenue, artist/tech/green spaces, and “a site for a new primary or intermediary public school”.

In a bizarre tweet thread, AOC confirmed she just doesn’t get economics.

Ocasio-Cortez criticized the deal for the billions in tax breaks the company was seeking, but many ridiculed her for implying that the money existed apart from the deal and could be used elsewhere.

Queens: Where did this coupon come from? $300 is too much. Who gave this to you? This is weird.

Say what? I guess this child’s use of ALL CAPS was supposed to be a “GOOD DAY, SIR!” flounce. But the tweet she was apoplectic over was a solid analogy. Businesses offer coupons, discounts and specials all the time. They make the cost/benefit analysis that the reduction in profit in the short term is worthwhile to increase business volume. Many communities offer similar incentives because they feel the short term reduction in tax revenues is worth the long term benefits of increasing the tax base. Any particular deal is open to debate on its merits, but the concept remains valid.

AOC, like most dormitory socialists, feelz businesses are inherently EVIL!. The idea of voluntary trade for mutual benefit escapes them. If I run a coffee shop that offers seniors a discount on coffee, I am not subsidizing them when I allow them to keep more of their own money. I’m trading some of my own profit to incentivize them to patronize my store.

I would wish Boston University might offer up a mea culpa for graduating such an ignorant twit. However, my gut tells me she’s a feature, not a bug, of the modern seminaries of Leftism.

And those 25,000 jobs? Sorry, New Yorkers. Take it up with Occasional-Cortex.