Previous post
Beijing Olympics: Why We Shouldn't Be There

Next post
Schlissel: Overpaid University President Out Of Work 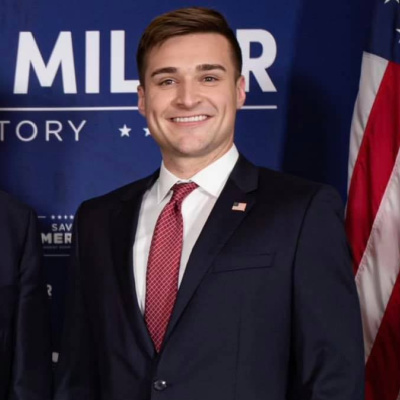 For years, American Conservatives and Republicans have cried into the wind for someone, anyone, with a spine to stand up to the Deep State. President Donald Trump, while a populist, but not a traditional Republican, stood up and took everything the evil Democrat Media Industrial Complex had to throw at him. One thing we have that the evil other side doesn’t have is young people with brains. One of those is Alex Bruesewitz. Remember that name.

Young people are the lifeblood of a political party. They organize and “door knock”. They attend rallies. They feed the pipeline. Alexandria Ocasio-Cortez is a mean, functional idiot, but she gets clicks for the Democrats.

Those at the top of both the Democrat and Republican parties are seen as spineless and only interested in acquiring and keeping money and power. These people, especially Republicans, talk a good game, but collapse like a cheap suitcase under any pressure at all.

Friday night, I was trying to decide between watching Tucker Carlson or a repeat of My Lottery Dream Home on HGTV. Fortunately, MacDuff was laying on the remote, and you never want to wake a sleeping terrier. Trust me. I was glad I was stuck on Tucker because that’s when I saw Alex Bruesewitz. It took me quite a few minutes to get my mouth closed.

Who is Alex Bruesewitz? Bruesewitz is a 24 year old political and marketing consultant and a co-founder of X Strategies LLC. He is working with Joe Kent, running in Washington State,a Gold Star husband and retired Green Beret. Bruesewitz is also working with Robby Starbuck who is running for Tennessee’s Fifth District (Nashville), and is a music video director, and many other America First candidates. Mr. Bruesewitz is apparently very successful, financially. Some of the candidates he supports are running against members of the January 6 Committee. And, that’s where he’s in the spotlight.

To rational people, it would seem members of the J6 Inquisition who have conflicts of interest with Bruesewitz would recuse myself. We are no longer in the vicinity of rational. The J6 Stalinist Kangaroo Court sicced Senior Investigative Sean Tonolli on Alex Bruesewitz.

Bruesewitz spoke at a Stop the Steal Rally on January 5, 2021. He has said that he abhors the January 6 violence. I agree with him that those few who committed illegal acts should be prosecuted and that those bad actors allowed the Democrat Media Industrial Complex to point their gnarled fingers at DJT.

Mr. Bruesewitz responded to Attorney Tonolli with a most polite, but firm letter:

“The Committee targeting me and others like me reeks of retaliation. I am active in national politics, raising money for and speaking on behalf of candidates for federal office. Some of the candidates I support are running against Committee members.”

Bruesewitz went on to explain why he believes the Committee is unlawful and shady: “It does not include the proper number of members, the proper party balance of members, or a Ranking Member selected in accordance with House rules and long-standing precedent. It is a constitutionally-rogue Committee stacked and packed to try to bring down President Trump and anyone who supported him.”

My heart fluttered. Texas Representative Dan Crenshaw praises Liz Cheney. Nancy Mace blamed Trump for January 6 before the day was over, before she knew anything. Who hired Ray Epps? Why has there been no real investigation of the murder of Ashli Babbitt?

Alex Bruesewitz has no such gray areas. Here is his interview with Tucker Carlson last night.

My message to the @Janauary6thCmte communist clown members:

You can all go to hell.

Thank you for having me on @TuckerCarlson. God bless you. pic.twitter.com/L8cReMW4Nt

“Dangerous and corrupt fools” on the J6 Committee. Yes. He pledged his own money to those harassed by the Dem J6 Committee. He’s going on offense. Please.

I have so many questions that the J6 Committee has no interest in looking into for our benefit. Who planted the bombs at the DNC and RNC headquarters ahead of January 6? What did Nancy Pelosi know and when did she know it? Why wasn’t the Capitol secured. The officer who shot Ashli Babbitt, Michael Byrd, was never interviewed. Why not? He shot into a crowd with Babbitt and a bunch of other Capitol Hill Officers. Isn’t this important? What was Ray Epps’ role? What was Jayden X’s role?

My very favorite part of his interview was when Alex Bruesewitz said that he had made millions and that he is young. If he lost it all tomorrow, he could make more. That is so rare today. Standing ovation.