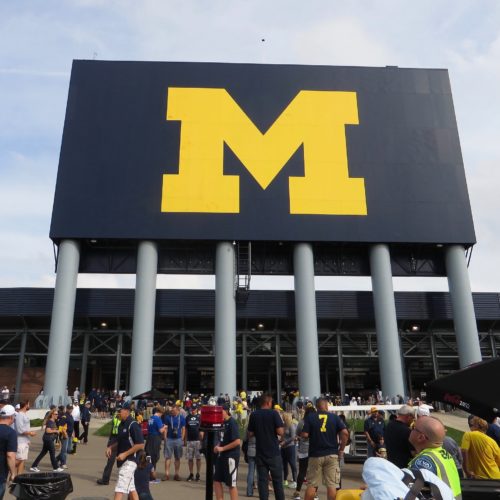 by Lisa Carr in People 10 Comments

A university is out an overpaid president this weekend as University of Michigan president, Mark Schlissel, has been removed from his post.

But, why? Here’s the reason from the University of Michigan Board of Regents:

Former university president, Mary Sue Coleman, will serve as interim president of the university. Schlissel steps down from a cushy base salary of $927,000 a year. Well, we hope the affair was worth it. Schlissel may not be getting that golden parachute that he would have gotten had he waited until 2023 to step down. The Board of Regents went on to publish the e-mail correspondence between Schlissel and the university employee, illustrating the head-over-heels university president engaging in flirty banter like he was 16 all over again. It’s so sexy when a man with a PhD doesn’t capitalize at the beginning or punctuate his sentences, don’t you think? Schlissel is married to environmental energy lawyer, Monica Schwebs but this did not stop him from having an inappropriate relationship. I thumbed through the pages of e-mails that ranged from quoting Shakespeare, to ordering matching Michigan facemasks for him and this person on Etsy (so cute), to bragging about gaining Delta Airlines Diamond Status after booking trips with his paramour. Schlissel jetted to and from various locales (while he postponed the UMICH’s football season because of COVID fears). Some e-mails also showed Schlissel ordering romantic take-out dinners and tipping a generous (snort) ten percent on the pre-tax amount (cheap schmuck) and luring said secret lover with a bite of his knish.

The most revealing thing about Mark Schlissel's emails is what we already know: the dude was paid almost $1 mil to jet around first class, court donors at basketball games, protect predators, and break strikes.
Diamond medallion status, damn

And tip only 10 percent.

now-former university of michigan president mark schlissel was doing his best to keep his favorite restaurants going during the pandemic by…tipping 10% on the pre-tax amount of his order. sometimes he rounded up! pic.twitter.com/6B26ggTsxh

Seems as if Dr. Schlissel had more on his plate than pizza and knishes but opted, instead, to hide out in his home…or on a plane to some destination somewhere else. Don’t worry, he and his boo wore their matching Michigan masks everywhere so, he’s not a COVID spreader. Heaven forbid he open his mouth to do anything about any injustice that went on at his university:

Schlissel stayed as far he could away from that conflict. But, he has found himself in trouble for his e-mails before. Seems while he was almost silent about the abuse victims of the past, he was VERY vocal about the election of Donald Trump in 2016. He offered his wisdom at an anti-Trump rally on campus after Hillary Clinton lost stating, “ninety percent of (the students) rejected the kind of hate and the fractiousness and the longing for some sort of idealized version of a nonexistent yesterday”, at a post-election vigil. Schlissel once again took to e-mail to express his outrage against Trump’s victory, claiming it “ironic” that a “minority of Trump supporters” at UM “now feel marginalized and ostracized in our campus milieu and post-election activity”. Ahh, yes, the milieuuuuuu and post-election activity that is so diverse and inclusive and intersectional for the “ninety percent” who rejected hate but not the ten percent who obviously are hateful human beings.

How did these students reject hate? Well, of course, they voted for who could very well be most hateful woman on planet earth but that’s beside the point. The assumption and judgement was already out there. Umm, can we say, microaggression much, Dr. Schlissel? You know what’s also hateful, dude? Cheating on your wife. Tipping possibly one of your students the bare minimum for your extramarital dinner in this disaster of an economic environment.

But the students who voted for Donald Trump in 2016, apparently, are the hateful bigots who needed the counseling, according to Dr. Schlissel. Not the guy who sits in his office collecting almost a million bucks a year who somehow finds the time to order on Etsy and talk about his soggy knish with a mistress on his work e-mail. One would think someone with a PhD would be smarter than this. Too much to ask of academia?