How much will it cost to educate the newest influx of illegal minors? $760 Million. That’s an estimate. How much will it really cost the American taxpayer? Who knows. According to Fox News:

The estimate comes from the Federation for American Immigration Reform (FAIR), which issued a report on the 37,000 “unaccompanied minors” – who mainly are from Central America – after analyzing data from the Department of Health and Human Services and education funding formulas in all 50 states.

The challenge in Texas and elsewhere is a shortage of qualified bilingual teachers and the higher cost of teaching students who speak no English. According to one report in 2006, it costs at least 30 percent more to teach a non-English speaking student than it does to educate the average English-speaking student.

Meanwhile, the McKinney-Vento Act mandates that local liaisons are appointed by the school district.  Great!  One question: who pays their salary? Survey says! Ding! You are correct. The American taxpayer does.  In fact, the map below gives you a sobering idea of just how much this estimated $760 Million will cost each state. 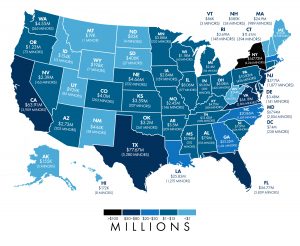 There are many school buildings across the United States that need serious repairs or need to be completely upgraded. I can point to about 15 in Colorado and Wyoming alone. According to Wyoming’s head of the School Facilities Department, Bill Panos,

However, when those two states are facing an additional $5 million in estimated costs to handle educating these illegal immigrants as the map above shows, I wouldn’t be surprised if Wyoming will have to delay some much-needed capital construction projects. Why? Its simple, the state may have to divert those funds to the education of the illegal immigrants.

Here’s another question for our readers. The US federal government requires that ages and verification of ages must not be questioned. Lynn, Massachusetts is a case in point. I don’t know about you, but I REALLY don’t think a 35 yr old can be classified as a child. But that’s just me.  But lets not take my word for it.  How about hearing it direct from the Mayor of Lynn, Massachusetts herself?

What this boils down to is this. We have a President who has thrown the doors to this country wide open. In doing so, with his “Go it alone” attitude (when he’s not wandering on some golf course), this President is creating an educational/economic sinkhole in our education system. There are amazing teachers out there. I’m privileged to know many of them, and they LOVE teaching. However, I fear for my friends and the teachers like them who have had an additional 37,000/$760 Million burden placed on them because our Duffer in Chief would rather swing a putter than lead.