Word “Surge” Is Militaristic Frame And Other AOC Idiocies

Word “Surge” Is Militaristic Frame And Other AOC Idiocies 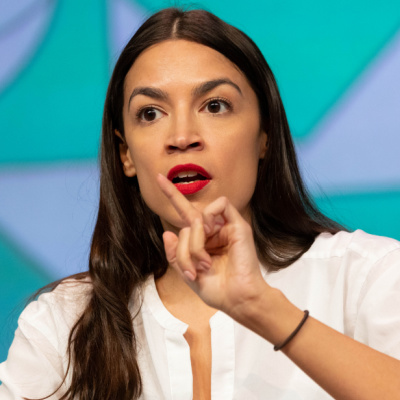 My, my, my, we have been so busy with Joe Biden’s dementia, and his “Administration” and their blatant destruction of every American tradition, we haven’t been paying attention to Representative Alexandria Ocasio-Cortez. AOC, as she is popularly known, beclowns herself every time she opens her pie hole. In a question and answer Instagram video with her followers, she spewed a lot of lies, but everyone is focused on the fact that she called using the word “surge” in regard to the border was using a militaristic frame. There is so much more.

You can watch the AOC Q & A video here:

AOC begins by talking about the exhaustion of living in a post-capitalistic society enduring a pandemic with no guarantee of housing or health care. Poor child, some of us understand that without capitalism there would not be lovely lovely modern conveniences (mod cons) that we enjoy every day, like modern health care and hvac systems. Thank God for Louis Pasteur and Willis Carrier. Since AOC has no idea of history, she wouldn’t understand the miserable lives most people lived before the mid-twentieth century.

One of AOC’s followers asks her about the recently passed Arkansas law banning hormone treatment and surgery for youths who believe they are transgender. It’s difficult to find unbiased information on the Arkansas law, not yet signed by Governor Asa Hutchison. For example, NBC News’ article is titled, “Arkansas passes bill to ban gender-affirming care for trans youth” and The Guardian’s title is “Arkansas and South Dakota pass bans targeting transgender minors”. From The Guardian article:

The Senate voted 28-7 on Monday in favor of the legislation. If the bill is enacted it would be the first prohibition of its kind in the country, opponents say. The bill would prohibit doctors from providing gender confirming hormone treatment or surgery to minors, or from referring them to other providers for the treatment. It also allows private insurers to refuse to cover gender-affirming care for trans people of any age.

The legislation restricts treatments that have been endorsed by major medical associations and human rights groups. They say the care is well established and part of a gradual process that has been shown to dramatically improve the mental health of the most vulnerable kids.

Occasional-Cortex isn’t going to let logic get in her way, no way. Senorita Cosa says this is an attack on trans-rights. She intones that “bigotry requires disinformation”. She rambles on about Trans Day of Visibility(today). Her ignorance compliments the surety of her rightness. She knows

nothing. You can see it in her eyes. The hamster took his wheel and vacated the premises.

And, then one of her followers asks AOC why she is not addressing the border crisis and the kids in cages like she used to do. Remember when Miss AOC was crying at an empty parking lot over kids in cages. Refresh your memory here. She loved America and hated what it was becoming. Balderdash.

Don’t dare call the surge at the border as surge.

Rep. Alexandria Ocasio-Cortez has finally addressed the border crisis — but only to accuse anyone using the term “surge” of pushing a “white supremacist” philosophy.

Ocasio-Cortez (D-NY) has repeatedly been accused of ducking the dangerously overcrowded migrant detention centers despite saying they were akin to “concentration camps” under the previous administration.

She initially appeared outraged when asked during an Instagram Live ask-me-anything session why she was “not addressing the border crisis and the kids in cages like you used to” — asking after a pause, “Are you for real?”

“It’s not a border crisis. It’s an Imperialism crisis, it’s a climate crisis, it’s a trade crisis. And also it’s a carceral crisis,” she said, without directly addressing the kids-in-cages allegation itself.

No, she didn’t address the tent cities that are over-crowded and have a 9% Covid rate. These kids that are separated from the coyotes that brought them to the border. These kids that might be 20 year olds. No, then she would have to address her own hypocrisy.

No, now the problem is that the word “surge” suggests a militaristic frame of white superiority. It’s not a border crisis, it’s an imperialism, climate and trade crisis. That wasn’t a problem when Trump was President. Then, it was just Orange Man Bad ripping children from the arms of their parents. And, it’s a carceral crisis, now. It’s a jail crisis? Our immigration system is based on our jail system according to this child-woman. She says that without any explanation. I want to see the coyotes that exploit, physically and sexually, these families in our carceral system. Fact.

AOC also blames are interventionist and destabilizing forces and claims that we have contributed more to climate change than any other country. Not true. The U.S. contributes 13% of CO2 while China contributes 33%, but AOC is deflecting from hypocrisy and doesn’t care about facts.

Taking a page from the Jen Psaki playbook, Occasionally Conscious then circles back to the surge. This is not a surge, she says, these are children and “they are not insurgents”. No, really. Really, she said that. A surge is an upward or forward movement by a crowd or wave. An insurgent is a rebel or revolutionary.

Derp for brains AOC says calling this an invasion is a white supremacist philosophy. I am pretty sure if 40,000 white Canadians breached our Northern border we would call that a surge or invasion. But, this woman is stupid. Sorry. I just cannot with her any longer.

Not only does AOC have the I.Q. of a stale loaf of bread, she is an I.Q. vacuum. She sucks brain cells out of people. So, I have nothing left to say except Surge, Surge, Surge, Surge. I hope that acts on her like water on the Wicked Witch of the West.