Previous post
The Deepening Madness of Maddow and Company 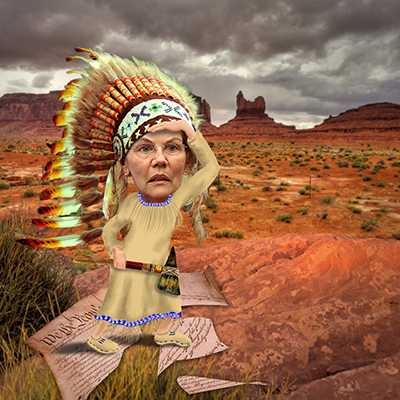 Left-Feminist scribbler, Mandy Marcotte for Salon, pretends it is something new that Elizabeth Warren doesn’t silo “women’s issues” — feminism is a seamless aspect of her progressive economic worldview. WELL, this is my shocked face!

Warren’s ability to pull off this linkage of sexism to a larger criticism of elite abuse of power — and really, it was a hat trick, since she also tied all that together with Bloomberg’s history of “supporting racist policies like redlining and stop-and-frisk” — wasn’t just the result of some clever writing from her strategic team, however much they may have helped. This fits in with a larger pattern with Warren, whose feminism is simply inseparable from the issues that have defined her career, namely her opposition to predatory capitalism and her war against the ways economic elites corrupt our political systems.

Mandy’s position of adoration would have you believe that Feminists™ haven’t made anti-capitalist Leftism a significant part of their litmus test of who is a True Feminist for decades.

And Mandy herself has made a career out of attacking women who dissent from the Leftist dogma of socialism, pro-abortion, and libertinism.

Mandy does get it right that, yes, Elizabeth Warren’s position in making Progressive ideology seamless with Feminism™ is enlightening. Though not in the way Mandy would like us to believe.

Absolutely, Warren is no moderate

Warren’s positions are radical. She is one of the cosponsors of S. 1645, the ostensibly named Women’s Health Protection Act of 2019. An abortion-on-demand bill that goes far beyond Roe v Wade in allowing abortion through 9 months gestation and disallows many state-required clinic standards. Note: Amy Klobuchar is also a co-sponsor on this bill. Warren supports public funding for abortion and disallowing any private insurance company from excluding payment for abortion or birth control. In other words, she supports forcing The Little Sisters of the Poor paying for birth control.

While Warren recognized in her book The Two Income-Trap that the push for women to enter the workforce as full-time professionals has not been all rainbows and unicorns, especially the impact of parents contracting out the raising of their own children to others, Warren’s prescription is not one of encouraging married couples to look at other ways of life-work balance but of giving The State an even bigger role in the family. Warren’s plan is to offer “free” universal childcare. Don’t worry, mom & dad, just drop off your toddler at our State-run indoctrination child centers and feel reassured that it’s paid for by those evil multi-millionaires with our new, annual, asset-tax! It’s Feminism’s dream! If you deplorables must insist on reproducing at least they can make sure you don’t get to unduly influence your kids with all your bitter-clingingness.

No woman should be authorized to stay at home and raise her children. Society should be totally different. Women should not have that choice, precisely because if there is such a choice, too many women will make that one.” – Simone de Beauvoir “Sex, Society, and the Female Dilemma,” Saturday Review, June 14, 1975.

Add to that, Warren wants to cancel all student loan debt, gut the Second Amendment, destroy private sector medicine with Medicare-for-All, and she also believes it is Feminist to encourage the destruction of women’s and girl’s sports.

Trans athletes are not a threat. We need to protect trans kids—and all LGBTQ+ kids—and ensure they feel safe and welcomed at school. I urge the Arizona legislature to reject this cruel bill. https://t.co/9ALVjeIBiv

Since Leftism privileges identity groups on the Victim Olympics scale, “cisgender” women of Feminism must take second place to trans-identified males. Warren definitely makes this part of her seamless progressivism by her pandering to the trans-activists. Even to hinting she’ll be looking for a non-binary person for Vice President.

I want to tell you exactly the kind of vice president I want: Someone who will be in this fight alongside me for your families. Someone who feels this fight passionately—and who brings his, her, or their own energy to get it done. #CNNTownHall

Bottom line is that there are very few policy differences between Warren and Commie Sanders on the role of The State — citizens take direction, and seek permission, from The State for every aspect of their lives. Warren’s Feminism is merely a wholly-owned subsidiary of the Left.

That, ladies and gentlemen, is neither moderate nor American.