Next post
Trump Not A Tyrant By Any Definition 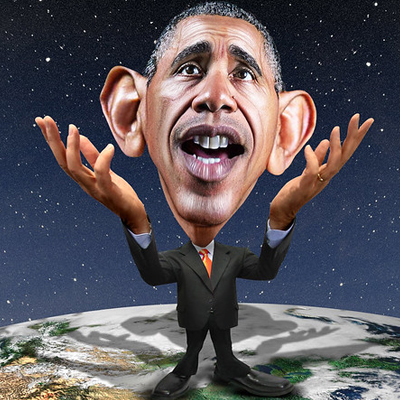 This year high school and college graduates were denied a lot of memories that the rest of us cherish. Their families lost out too, because they couldn’t see their kids walk across a stage to receive their diplomas. But Barack Obama, remembering not to let a crisis go to waste, addressed thousands of graduates through virtual commencement events. He also took the opportunity to bash Donald Trump, hopefully steering new graduates into the arms of Joe Biden. Which literally has an enormous ewww factor to it, but you get my drift.

First, Obama spoke to students at historically black colleges and universities on Saturday afternoon via live streaming. Entitled “Show Me Your Walk H.B.C.U. Edition,” the virtual commencement address started with the usual blah, blah, blah, big achievement, Michelle and I are so proud of you. In other words, much of the usual pablum you hear at most graduations. But then he whipped up some good ol’ racial injustice, in particular the recent controversy over the Ahmad Arbery shooting.

“We see it in the disproportionate impact of Covid-19 on our communities, just as we see it when a black man goes for a jog and some folks feel like they can stop and question and shoot him if he doesn’t submit to their questioning.”

“More than anything, this pandemic has fully, finally torn back the curtain on the idea that so many of the folks in charge know what they’re doing. A lot of them aren’t even pretending to be in charge.”

Hmm, to whom was President ISIS-Is-A-JV-Team referring? Boy, that’s a toughie.

So how are the new HBCU graduates supposed to respond to the “folks in charge?” Why, with some community organizing!

“The fight for equality and justice begins with awareness, empathy, passion, even righteous anger. Don’t just activate yourself online. Change requires strategy, action, organizing, marching, and voting in the real world like never before.”

And vote for Joe Biden, too! *wink wink.*

However, Obama’s virtual commencement tour was just getting started. On Saturday evening, he addressed high school graduates through “Graduate Together: High School Class of 2020 Commencement.” The think tank XQ Institute, along with the LeBron James Family Foundation and the Entertainment Industry Foundation organized the event.

But Virtual Commencement, High School Edition, was a lot more creative than the college version. Teenagers filling a screen Very Brady-style sang the National Anthem. The Jonas Brothers performed, along with other singers I’ve never heard of. LeBron James spoke, as did education activist Malala Yousafzai, who is also missing her graduation.

So did this geezer, who took the opportunity to bash President Trump as well.

Bill Clinton: "Seething resentments and a broken information system have empowered those who — for profit and power for themselves — are willing to inflame our worst instincts. It's put your future, our democracy, and our very planet at risk." #GraduateTogether #Graduation2020 pic.twitter.com/madMYBd4KE

But the star of the virtual commencement, Barack Obama, didn’t speak until the very end of the festivities. So did he say the same things to the high school class of 2020? Or did he tone things down for the younger crowd?

Well, he modified his words a bit. This time he talked about school shootings and climate change.

“Along with the usual challenges of growing up, all of you have had to deal with the added pressures of social media, reports of school shootings, and the specter of climate change.”

Greta Thunberg would be ecstatic.

“. . . you’re going to have to grow up faster than some generations.”

Tough times, man. Previous generations of graduates had to worry about fighting a war, but these kids might have to miss “getting dropped off at campus in the fall.”

But it’s all good! Obama told the teens.

But in case you’re wondering — yes, Obama slammed Trump again, although his words were less lofty. Gotta connect with the students, you know.

“Doing what feels good, what’s convenient, what’s easy — that’s how little kids think. Unfortunately, a lot of so-called grown-ups, including some with fancy titles and important jobs, still think that way — which is why things are so screwed up.”

“Doing what feels good” — that brings to mind a certain former president and an intern, right? Anyway. . .

Obama finished with inviting this crop of kids to also become activists. He and Michelle are ready to teach them how to become good little community organizers!

“When you need help, Michelle and I have made it the mission of our Foundation to give young people like you the skills and support to lead in your own communities, and to connect you with other young leaders around the country and around the globe.”

Some of the Blue Checks at Twitter went orgasmic over Obama’s commencement speech. Like Michigan’s female  Governor Gretchen Whitmer:

Thank you President @BarackObama. Watching with my 2020 grad.
♥️ the 3 lessons:
1. Don’t be afraid
2. Do what’s right
3. Build a community #GraduateTogether

“Build a community?” Seems to me that Whitmer has been turning Michigan communities into police states, but I digress.

Obama’s Virtual Commencement Tour was really about inspiring graduates to become loyal members of the Democratic Party. They were also a not-so-veiled rehash of the OrangeManBad theme. But come summer, most of these kids will forget his words. After all, they’ve been locked up for months, and they just want to get out and enjoy life again.