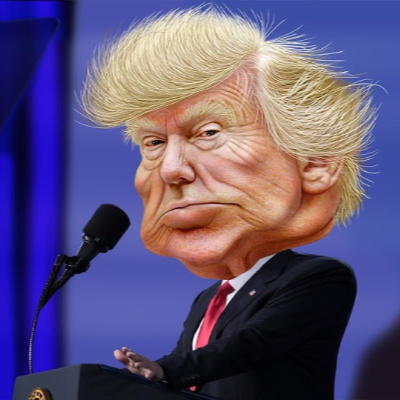 Since before he even took the oath of office, President Donald Trump has had the label “tyrant” ascribed to him. A Harvard faculty member, from the writing department, uses writing from philosophers to prove that Trump both is and is not a tyrant. Holy Schrodinger, I kid you not. It’s a cute attempt, but his premise is wrong. Therefore, his conclusions are all wrong.

When somebody’s the president of the United States, the authority is total”

Just as when someone pulls out a Bible quote to prove a point, context is the full chapter. So, is the whole video of the press conference where Trump did say the quote while being, as usual, badgered by the press. In this video, he also talks about the relationship with the Governors:

Presidents have been expanding their power since Teddy Roosevelt, but Donald Trump has mostly respected the idea of Federalism, especially during this pandemic.

Mr. Wilson then goes on to the philosophers to prove Trump is/is not a tyrant. Wilson starts with Euripides, Socrates and Aristotle:

Nor is Trump a tyrant to Socrates: “For government of men with their consent and in accordance with the laws of the state was kingship; while government of unwilling subjects and not controlled by laws, but imposed by the will of the ruler, was despotism [tyrannida].” Admittedly, the issue of consent is tricky. There are questions about the integrity of the 2016 election, including Russian interference and an Electoral College vote that did not reflect the popular vote. But given the electoral system in place, U.S. citizens consented to elect Donald Trump.

Oops, sorry Wilson. Yes, that tricky, dastardly Electoral College. The one in The Constitution of the United States of America. Maybe, Wilson, you should try reading it. That should be in your wheelhouse as a writing instructor.

Trump is implicated, however, in Aristotle’s definition: “Tyranny is a kind of monarchy which has in view the interest of the monarch only.” Trump is not a monarch, but he exercises political power for his own benefit rather than public good: self-enrichment is his top priority.

Aristotle identified three kinds of tyranny. In the first, a usurper gains and keeps power by force — that is not Trump. The second is “elected monarchs who exercise a despotic power” — that’s closer. Aristotle’s “third kind of tyranny, which is the most typical form,” does and does not apply to Trump: “This tyranny is just that arbitrary power of an individual which is responsible to no one, and governs all alike … with a view to its own advantage, not to that of its subjects, and therefore against their will.”

We have all seen this repeated in the media, political and academic arenas. Trump is selfish. Trump is only in it for himself. I don’t see this. When you watch Trump with others, he always gives credit where credit is due. I am thinking about how the President turned over the microphone, in the Rose Garden, to Rabbi Yisroel Goldstein, after the Chabad of Poway shooting. Or, during this pandemic, when business leaders are gracious in producing needed products, the President gives them the microphone to brag on their accomplishments. He doesn’t have to do that. I am trying hard to think of a recent President who has done such a thing. From my point of view, Donald Trump loves America, and her people, and is always thinking of us.

After a few more philosophical notes, Wilson ends his post with this paragraph:

Ultimately, Trump both is and is not a tyrant. He is to Aristotle, Milton and Locke, is not to Euripides, Hobbes and Madison. He is a tyrant in personality but not in policy. Legally, Trump isn’t a tyrant, but morally he is. He and his lawyers hew closely to the laws he cannot break — or that will not be enforced — while bucking the norms of presidential behavior. Or, put differently, Trump is not a tyrant, but he acts like one.

Since Wilson’s entire premise is wrong, I will credit Ayn Rand. Always check your premise.