Next post
Court Rules Masterpiece Must Bake The Cake 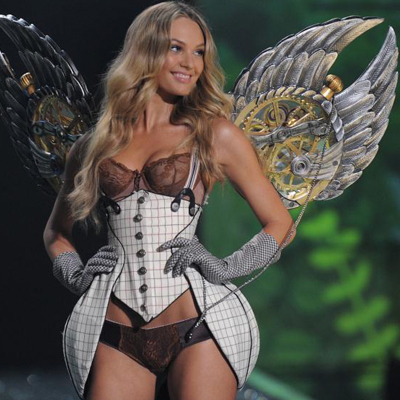 Say farewell to the Victoria’s Secret angels, those statuesque models who traversed runways wearing outlandish wings and frilly lingerie. They soon will be history, because the company is now embracing feminism.

But by going woke, will Victoria’s Secret go broke?

Instead of maintaining its particular image of femininity, the company is trying to redefine what “sexy” means. Thus, they’ve formed the “VS Collective” (the word “collective” is alarming enough) to inform us all. Composed of seven women, the collective will focus more on achievements than measurements.

Martin Waters, who became Victoria’s Secret CEO in February, explains the reason for the big change.

“We needed to stop being about what men want and to be about what women want.”

So men who shop for their wives and girlfriends in Victoria’s Secret can go pound sand, I guess.

The members of the VS Collective will include people like Valentina Sampaio, a Brazilian trans model.

Others include Eileen Gu, a 17-year-old skier; Paloma Elesesser, a size-14 model; and Priyanka Chopra Jonas, a 38-year-old Indian actor and tech investor.

There’s also Megan Rapinoe, the purple-haired lesbian soccer player whom you would’ve never heard of had she not been an attention-grabbing jackass.

This is the same Rapinoe who channeled her inner Colin Kaepernick and kneeled during the national anthem to protest injustice or something.

U.S. Soccer reversed a ban on kneeling during the national anthem, admitting "this policy was wrong."

It banned the peaceful protests in 2016, after Megan Rapinoe kneeled in solidarity with Colin Kaepernick to protest police brutality and racial injustice. pic.twitter.com/TsQR5BXoXv

In 2019, when the US Women’s National Team played in the World Cup, Rapinoe refused to sing the National Anthem. Then, when the USWNT won, she had choice words about going to the White House.

So this thoroughly unlikable woman will be deciding what women really want — including, one assumes, millions of patriotic women.

Of course feminists rejoiced, like the website Jezebel, which said that Victoria’s Secret’s “regressive marketing sucks.” They bid good riddance to the “tall, incredibly thin, usually white” women who graced the company’s catalogs and runway shows.

“Some of the dumbest people run the most powerful companies on earth and it’s hilarious watching them destroy themselves. Megan Rapinoe?? Nobody likes feminists. Nobody. Even other feminists hate feminists. They’re the least appealing people on the planet.”

Plus, Kurt Schlichter of Townhall predicted:

“There’s going to be a huge hole in the marketplace ready to be filled by the normal.”

Now it’s true that Victoria’s Secret has been going through a rough patch recently, as have many retailers. Last year, for instance, the company closed 250 locations, and plan to close between 30-50 US stores in 2021. Plus, their share of the US women’s underwear market dropped from 32% to 21%.

However, that’s been a problem for many retailers, as a record number of stores closed in 2019, even before the pandemic. But then 2020 broke that record, with over 12,000 stores closing due to Covid and a corresponding rise in online shopping. Some observers are predicting that 2021 could be even worse yet, despite reopening of the economy.

But another troublesome issue that Victoria’s Secret has is the Jeffrey Epstein problem. Leslie Wexner, who founded L Brands, the parent company of Victoria’s Secret, had close ties to Epstein. Wexner gave Epstein power over his finances, charities, and even his personal life. Meanwhile, Jeffrey Epstein grew rich through his billionaire client while simultaneously sex trafficking teenage girls.

Not only that, but top executive Ed Razek was found to have harassed and even groped Victoria’s Secret models. Executives alerted Leslie Wexner, who did nothing. Razek and Wexner remained close allies in the company.

So it’s understandable that Victoria’s Secret wants to remove the stench of Jeffrey Epstein and the Razek/Wexner era. But is going full feminist going to save it?

The company exists in an elitist bubble in which marketing “experts” rely upon a progressive zeitgeist to inform them what women really want. They have concluded, apparently, that American women are mostly feminists who are fed up with men — especially white men. Women don’t want lingerie that turns them into sex objects; instead, they only want underwear that fits and is comfortable. And they also want to see women who look like them pictured in advertising — no matter what size they are.

That’s baloney. If that’s all women cared about they’d only buy Hanes or Fruit-of-the-Loom underwear at Wal-Mart. And they certainly wouldn’t buy high heels, either.

Yes, men love the fantasy offered by Victoria’s Secret models. But their wives also want that fantasy, too. These women know they don’t look like lingerie models, but wearing the lingerie makes them feel attractive. And if their husbands like the way they look — that’s a bonus. Because there are millions of women out there who actually like men in general and love their husbands in particular. Which, of course, is a shocker to feminists who believe that men are the scourge of humanity.

Oh, Victoria’s Secret — whatever are you thinking?