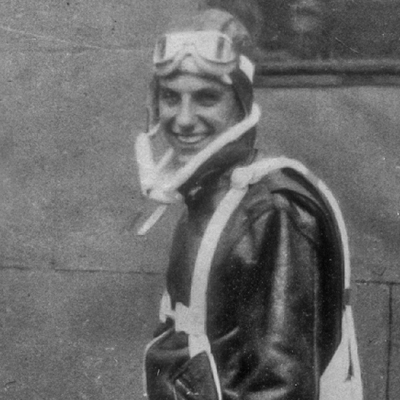 by Kim Hirsch in military 10 Comments

On each Veterans Day, I wear a long black scarf with bright red poppies. I bought it several years ago at the National World War I Museum in Kansas City, and it reminds me that Veterans Day had once been “Armistice Day.” On that day in 1918, on the “11th hour of the 11th day of the 11th month,” World War I ended.

But on that day I also remember a special veteran of World War II whom I lost in 2019. It is now my second Veterans Day without him. That man was my father, my hero.

My dad, Harold Chubbs, was born in April, 1924, in Gary, Indiana, a grimy steel town on the southern tip of Lake Michigan, in the shadow of Chicago to the northwest. He grew up as a blue collar kid, the son of a mill worker, experiencing not only the Great Depression, but the serious illnesses of his mother and older sister. They both had contracted tuberculosis, a disease that devastated enormous numbers of Americans in the days before antibiotics.  Dad’s mother and sister both entered a TB sanitarium for treatment. His mother survived, his sister did not. She died in 1939 at the age of 22.

He graduated high school in 1942, the first full year of U.S. involvement in World War II. But rather than being drafted, Dad volunteered for the military, despite friends telling him to “wait until they get ya!” Perhaps it was patriotism. Or perhaps it was also because he would be able to choose which branch of the military he would serve in. Dad had always loved airplanes, so he volunteered with the Army Air Force. (The former Army Air Corps became the Army Air Force in 1942.) 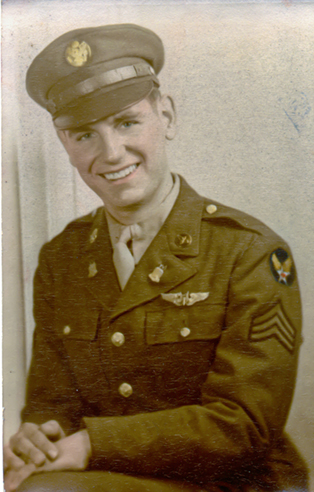 Dad had his sights set on becoming a pilot. However, after stateside training, the AAF instead assigned him to a B-17 heavy bomber crew with the 15th Air Force stationed in Sterparone, Italy. He arrived for combat service in the summer of 1944, right after D-Day. By that point in the war, bomber crews no longer completed 25 missions; instead they were to complete 50, as fighter planes then escorted the bombers. Their escort group went on to achieve legendary status as the Tuskegee Airmen. 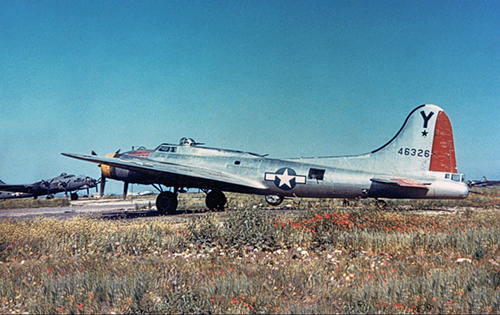 Actual B-17 bomber in which my father flew; Italy. Personal collection.

Dad served as the flight engineer. His job was to make sure the plane was airworthy before takeoff, and that the fuel was balanced between the wing tanks during flight. During combat, he manned 50-cal. machine guns in the top turret. All this responsibility, and he was only 20 years old. 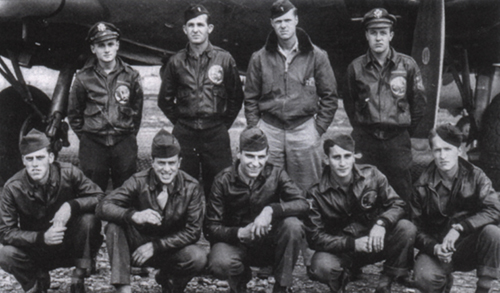 During missions, the B-17 would climb to 27,000 feet altitude and plunge the men into temperatures down to 50° below zero. As they entered their assigned bomb run, both German and American fighter planes would peel off, leaving the bombers at the mercy of anti-aircraft guns below. To make things worse, the bombers also had to slow down in order to hit their targets. Dad saw planes hit by flak; one time the bomber in front of them took flak and burst into flame. Another time a plane beside them took a shell through its wing. Dad’s plane would also return with bullet and shell holes.

Despite all this, Dad completed his 50 missions in 90 days, receiving the Air Medal for “meritorious achievement while participating in aerial flight.” The AAF also promised him an officer’s commission if would continue his service in the Pacific. But he declined. He had seen enough of war.

So he returned to Gary after being discharged in 1945. In 1947, he married my mother, and they remained together for 65 years, until she passed away in 2012. 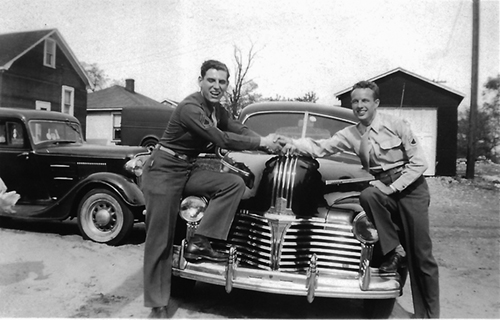 My father rarely spoke of his service when I was a child. Much of it was too awful to remember, I suppose. However, as time passed, he became involved with reunions of his bomb group, which he would attend each year. He even became a rock star of sorts in town, and would speak of his time in WWII to various groups who would ask him. Yet his attitude was like that of most veterans of World War II: they weren’t heroes, they just had a job to do. So they did it, and came home.

I still have Dad’s bomber jacket. My brother recently found his AAF-issue flying goggles in the old house — complete with box. And when I get the chance, I tour the old bombers that sometimes pop up at air shows. There are fewer of them around, just as there are fewer WWII veterans each year. Most of them are now gone. 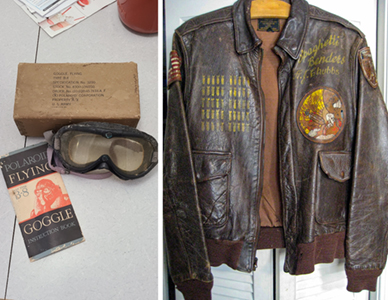 Dad lived a long life, passing away in October, 2019, at the age of 95. As my husband said with admiration, “he was a tough old bird,” but eventually, the flame burned out. He died in his own bed, in the house he had built himself, the house in which I grew up. He may have thought he was just “doing his job” in 1944, but to me he was my hero. So I wear my black scarf with the bright red poppies on Veterans Day, especially for my dad.