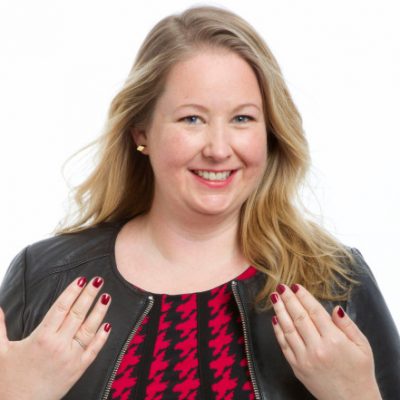 Next post
Quote of the Day: Childless Brat Whines That She Needs "Meternity" Leave Because She's Jealous of Maternity Leave 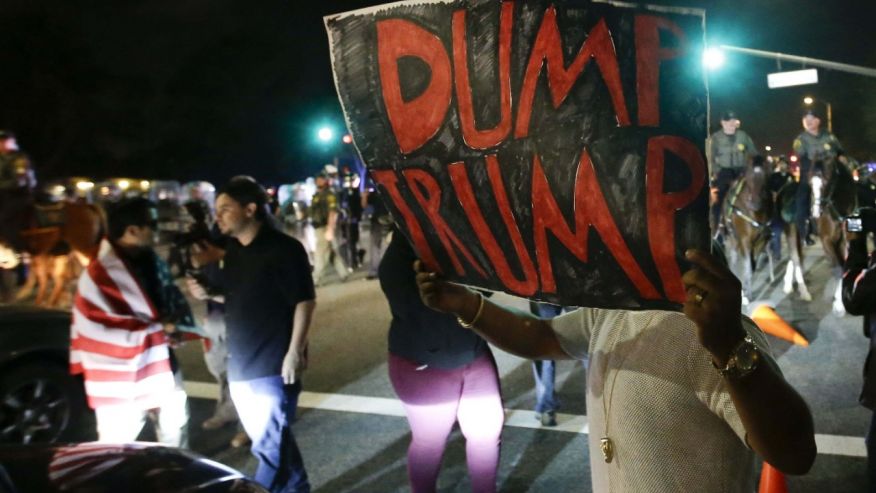 Make Mexico pay for the wall.

Accusations of Gestapo tactics. Mocking widows, making fun of people’s looks, calling people haters and losers, and issuing threats of physical force. Which include promises of a “rough” July if things don’t go his way and promises of “riots” at the GOP convention if there is any move towards a brokered convention.

This and more from Donald Trump, the campaign, and many of his followers has set the tone for this year’s election cycle. The tone is mean-spirited, hateful, and oftentimes times vicious. Just scroll through Facebook and Twitter and you’ll catch a glimpse of it. Last night, Costa Mesa, California got a dose of this ‘tone’ and divisiveness that the campaign has generated.

As Republican presidential front-runner Donald Trump held one of his typically raucous rallies inside the Pacific Amphitheater in Costa Mesa, Calif., Thursday night, a wild scene was unfolding outside.

A large group of protesters flooded the streets as Trump kicked off his Golden State campaign. The crowd continued to increase as the billionaire businessman’s speech drew to a close around 8:45 p.m. local time and he began signing autographs as his Secret Service detail stood close by. 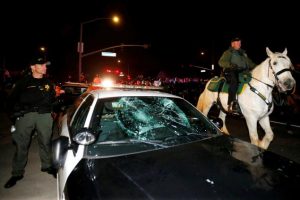 A @realDonaldTrump supporter just got punched in the face as a scuffle broke out in the street: pic.twitter.com/3h3Fllm3V3

The protestors stomped on cars, hurled rocks at passing motorists, scrawled graffiti on vehicles, and tried to flip a police vehicle.

“I’m protesting because I want equal rights for everybody, and I want peaceful protest,” said 19-year-old Daniel Lujan, one of hundreds in a crowd that appeared to be mostly Latinos in their late teens and 20s.

Think about that last sentence for a minute. 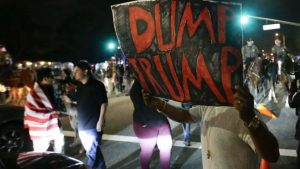 And then consider what another protestor said…

“This is the anger people have against Trump,” said Jose Cruz, 21, as he pointed to the protesters running in the middle of the street.

#TrumpRally Don't these folks get it? Violence is exactly what Donald "I'd like to punch him in the face" Trump wants.

The violent idiots who destroyed police cars at last night's #TrumpRally don't understand that they're making his point for him.

Meanwhile, Trump was fanning the flames once again during his rally speech.

Like Donald Trump or not (and I don’t)…I fear that we are going to see more of this from now until the convention. California’s primary is on June 7. Can the state, the citizens, and the law enforcement sworn to protect handle more clashes like this? I hope so because its pretty obvious that there will be more of this senseless violence.

Many are, rightfully so, denouncing what happened last night. However, there is one who isn’t and in fact hasn’t denounced ANY of the violence that has happened at his campaign rallys across the country. That person is Donald Trump. In fact, his only comment about violence was to state, in response to a question from Jake Tapper, that protestors are bad dudes who’ve done bad things. That’s not denouncing the violence, that’s half heartedly acknowledging that it happened!