Next post
From the VG Bookshelf: The State and Revolution (Part 6) 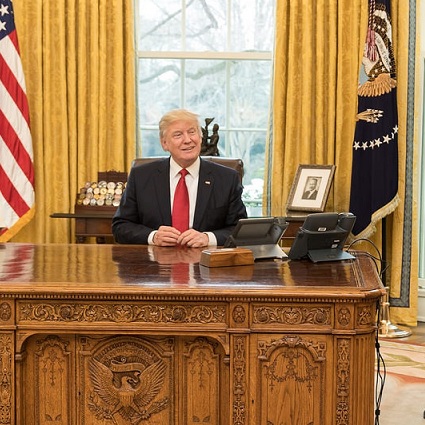 As the government shutdown continues over the border wall funding stalemate, President Trump decided to do what he does best – speak directly to the American public via a primetime speech from the Oval Office.

If there is one thing that this president has realized, it is that the people need to hear things directly from him. When this address was announced as a primetime slot, however, the media lost its collective cookies. However, Michelle Malkin helpfully pointed out the many, many times that President Obama was given primetime coverage for live speeches without a second’s hesitation, and I don’t recall that rebuttal time was granted by those same networks except for the State of the Union.

Some in the press are getting more than a little unhinged. Why are they so upset that the president wanted to talk directly to the American people?

UNBELIEVABLE: Don Lemon suggests that Trump's speech be delayed so it can be edited and kept from Americans.

Chris Cuomo (the voice of reason) corrects him and says wanting a border wall isn't immoral or wrong.

Perhaps its because the facts, the REAL facts make them look like fools. They stomp their feet and insist that they know best. But when Trump sends a letter and detailed presentation to EVERY member of Congress on January 4th, what do they do? Sweep it under the rug and hope no one notices. Well, we noticed.

During the meeting, there was debate over the nature and extent of this crisis and its impact on Americans. It had been my hope that Homeland Security Secretary Kirstjen Nielsen would have the opportunity to deliver a presentation discussing the facts about the depth and severity of the humanitarian crisis and the security crisis that is now unfolding at the Southern Border.

However, some of those present did not want to hear the presentation at the time, and so I have instead decided to make the presentation available to all Members of Congress. I encourage you to review it carefully, to share it with your staff, and to discuss it with other lawmakers. In crafting a Homeland Security bill, it is essential that we make decisions based upon the facts on the ground—not ideology and rhetoric—and that we listen to the law enforcement personnel on the front lines. The Southern Border is a very dangerous place—in fact, Border Patrol agents routinely encounter some of the most dangerous criminals, cartels, and traffickers anywhere in the world.

Read the entire letter here. The presentation is a must read as well. A few facts that Nancy Pelosi refused to hear are:

Is it any wonder that, with the Democrats refusing to listen, the President decided to talk to WE THE PEOPLE?

Now, Trump on a script is very different than Trump off the cuff. Tonight’s speech proved that point again. When the president is on script, he is able to make his points clearly and directly, without the embellishments and hyperbole that are routinely a part of his rally speeches.

The full transcript of his speech can be found here.

Meanwhile, the facts he laid out regarding those who have lost their lives to illegal immigrants, along with the sheer amount of violence and drugs we have to deal with, are devastating. Trump asked a key question regarding our border security and illegal immigration:

“How much more American blood must be shed before Congress does their job?”

It’s a fair question. Will Congress step up to the plate? Not if Chuck Schumer and Nancy Pelosi have their way. That is why Trump talked to us. That is why he went to WE THE PEOPLE.