Next post
Paladin’s AMERICAN GOMORRAH ™ -- “Show Us the Crime” Edition 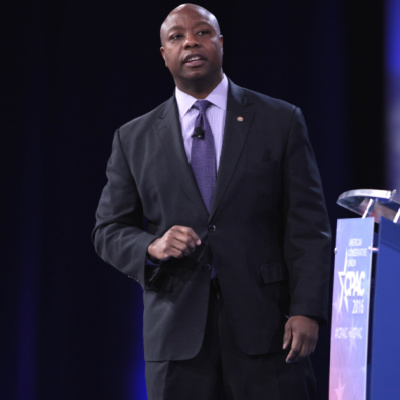 How do you know when racist, soulless droids have no rational argument against you? They send the Twitter Thought Mob out after you. After Senator Tim Scott gave the Republican rebuttal to Joe Biden’s Joint Address to Congress last night, “Uncle Tim” trended on Twitter. The mob has nothing, and they are terrified. Tim Scott for the win.

Last night, while Joe Biden was speaking, I watched “The Nevers”, a Victorian Steampunk historical fiction on HBO. Victory Girls’ Deanna took one for the team and watched Old Joe. You can read her wrap up here. Free! Free! Free! My program ended just in time to catch Tim Scott, the junior Senator from South Carolina, give the Republican rebuttal to Joe. Deanna also did a wrap up on that, which you can read here. I was cheering Senator Scott.

“A hundred years ago, kids in classrooms were taught the color of their skin was their most important characteristic — and if they looked a certain way, they were inferior.
“Today, kids again are being taught that the color of their skin defines them — and if they look a certain way, they’re an oppressor.
“From colleges to corporations to our culture, people are making money and gaining power by pretending we haven’t made any progress. By doubling down on the divisions we’ve worked so hard to heal.
“You know this stuff is wrong. Hear me clearly: America is not a racist country.
“It’s backwards to fight discrimination with different discrimination. And it’s wrong to try to use our painful past to dishonestly shut down debates in the present.
“I’m an African-American who has voted in the South all my life. I take voting rights personally.
“Republicans support making it easier to vote and harder to cheat.

While I was shouting “Huzzah”, the racist, soulless Twitter droids were dripping venom that a black man should wreck the narrative that they have been using to divide us along racial lines. For eleven hours “Uncle Tim” trended on Twitter. This was not some bot algorithm trend. This was human curated.

Trotting out Tim Scott, Candace Owens, and a host of other uncle and auntie ruckuses to deny the existence of white supremacy, racism, and anti Black bigotry neither erases America’s ugly racist past nor its current racist treatment of Black people.

The concept of an “Uncle Tom” -as that term is used in the Black community-is a slave who is given prestige & comfort by the master, using his position to tread on the slaves abused by the master.

Repackage that concept to modern times & ask if Tim Scott fits the definition.

It doesn’t matter if that is not how “Uncle Tom” was represented in the novel, “Uncle Tom’s Cabin”.

Uncle Tim lost me when he said Biden was dividing us after he had sat quietly while Tang destroyed this country for four years. #BoyBye https://t.co/yXd8JV0LC3

Are there racists in America? Oh, heck yes. There are clearly some racists on the Right. We on the Right despise them.

And, then there is this from the transcript of Tim Scott:

“Original sin is never the end of the story. Not in our souls, and not for our nation. The real story is always redemption.
“I am standing here because my mom has prayed me through some very tough times.
“I believe our nation has succeeded the same way. Because generations of Americans, in their own ways, have asked for grace — and God has supplied it.
“So I will close with a word from a worship song that helped me through this past year. The music is new, but the words draw from Scripture.
[May] the Lord bless you and keep you,
Make His face shine upon you
And be gracious to you…
May His presence go before you,
And behind you, and beside you…
In your weeping and rejoicing,
He is with you…
May His favor be upon [our nation], for a thousand generations
And your family… and your children…
And their children.
“Good night, and God bless.”

The racist, soulless droids of the Left can send their Twitter thought mob after Senator Scott, but he wears the full armor of God and you can’t touch him.