The True Champions of Women’s Rights

The True Champions of Women’s Rights

It is so reassuring to see that women in the first world have solved all of the important problems of the world.

At least, that’s what I can assume, since I read that Hamilton College (located in upstate New York), which has a “Womyn’s Center” (no, that is not a typo on my part), is hosting an event celebrating… the female orgasm.

No, I am not joking.

So, the “womyn” of Hamilton College have tackled all the other major issues of the day to their satisfaction, and now that they have done so, they are going to focus on their sex lives.  Because this is what female empowerment is all about (taken from their Facebook page):

Whether you want to learn how to have your first orgasm, how to have better ones, or how to help your girlfriend, Maggie and Marshall cover it all with lots of humor, plenty of honesty, and an underlying message of sexual health and women’s empowerment.  Are you coming?

In other parts of the world, women’s empowerment looks quite different.  In fact, it has gotten three brave women killed in Afghanistan.  Their names were Islam Bibi, Shah Bibi, and Nigara (who went by one name).  And what were they doing, in the name of women’s rights, which got them killed?

They dared to be police officers. 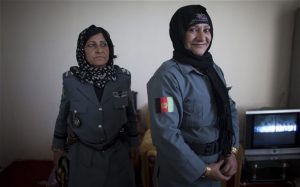 Third Lieutenant Islam Bibi (pictured above, right) was shot and killed in July of this year.  She was a seven-year police veteran in Helmand Province, who had been threatened with death three times by her own brother, but refused to quit.  She was shot and killed on her way to work.  Sergeant Shah Bibi, also a police officer in Helmand Province, was also murdered in July, while out shopping.  Shah Bibi’s husband was also a police officer, who was also killed earlier in the line of duty.  Islam Bibi was a mother of seven.  Shah Bibi left behind four children.

Taking over Islam Bibi’s job was Second Lieutenant Nigara, who declared that she would not be intimidated into leaving her position.

“I am receiving threats on a daily basis,” she said. “The smugglers and terrorists are threatening me, saying I should give up, but I tell them that I am an Afghan woman, and I won’t leave the job as long as there is blood in my veins.”

Lt. Nigara was assassinated while waiting for a bus to take her to work on September 16th.

Less than 1% of Afghanistan’s police force is made up of women.  They have reported (anonymously, of course) that they are routinely harassed and victims of sexual violence, even from their male police colleagues.  And as the United States and other western countries continue to withdraw from Afghanistan, it is terribly disheartening to see that all the time and effort we have spent in that country still has not changed it much, if at all, for women.

Equally disheartening are narcissistic western “womyn” who preach about women’s rights and women’s empowerment who completely ignore the plight of women in other countries, because they are too busy trying to figure out how to have the perfect orgasm.

Remember the names of Lt. Islam Bibi, Sgt. Shah Bibi, and Lt. Nigara.  Remember that they died trying to live as a woman in a culture and a country that would rather see them dead than try to serve as a police officer.  They are the ones, and those other women whose names we don’t know who live to serve another day, who are truly fighting the good fight for women’s rights.