“Nothing normal about being gunned down at work” says Obama

“Nothing normal about being gunned down at work” says Obama

by Catherine Wilkinson in People 4 Comments

No, nothing “normal” at all about that. Innocent men “gunned down where they work” and for parents to have their children killed by maniacs and then nothing done about it is not “normal”. And much worse, imagine having the Secretary of State lie to your face about it, the media ignore or ridicule your questions, and members of Congress insult your pleas for justice. Ask Pat Smith or Charles Woods about how normal that feels. After all, it was their children “gunned down where they work”. You want gun control? How about start with not shipping weapons to terrorists?

“Our tears are not enough,” Obama said during a memorial service for the victims and their families. “Our words and our prayers are not enough … We are going to have to change.”

Ok, I agree with Captain Awesome for once!  We ARE going to have to change.

Let’s start with your phoney teary prayers for the victims.  Really?  You have more chutzpah I thought possible. But your political posturing during tragedy doesn’t shouldn’t surprise me, I guess. There probably wouldn’t have been ANY victims or at least not as many if only our military were allowed firearms to protect themselves.  If our military is expected to be the world police and your personal security personnel and umbrella holders, surely you can allow them to protect themselves? 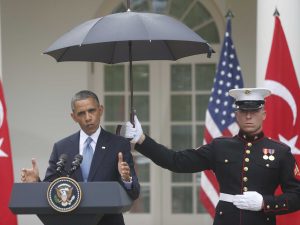 “Obama, who has proposed changes to the nation’s gun and mental illness laws, noted that shootings in other countries such as Australia and the United Kingdom led to changes in their gun laws.  “What’s different in America,” he said, “is it’s easy to get your hands on a gun — and a lot of us know this.”

Yes, a lot of people do know that.  Especially those criminal thugs and lunatics who live in cities with the strictest gun control laws in the country.  Gun “control” isn’t about making you safer and less likely to get shot by a raving lunatic.  Instead the opposite happens when people have tools for self-defense.

But let’s be honest.  The “control” you speak of isn’t really about guns.  And your tears and prayers are an insult to those who truly do weep for their loved ones and sincerely pray for justice.  Your narcissistic and ungracious push for more gun control merely is the latest pathetic spectacle in your unending public posturing to further your plans to “control” healthcare, food, business, the “climate”  the U.S. Constitution, and the liberty of Americans.

Stop it.  You beclown yourself more than usual.  And you atrociously dishonor our military and their families.  I suggest you try some real prayer.

And start with a prayer for forgiveness.