Previous post
Saudi Women Get To Vote And Get Elected

Remember when the Administration was falling ALL over themselves in an effort to reassure us that Tashfeen Malik’s K-1 Visa was thoroughly and I mean THOROUGHLY vetted? 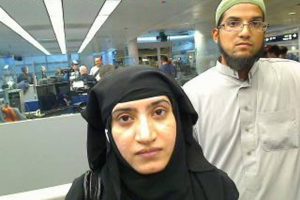 HAHAHAHAHA!! Yeah. No. First we found out that she falsified addresses on her application. And, contrary to what the excuses crowd was trying to push, the addresses weren’t just a simple error. Then there are the issues with where she attended school, where she traveled, and exactly how long she and Syed Rizwan Farook have known each other.

Now? Turns out that Tashfeen was quite the social media butterfly for YEARS before she set foot on American soil. YEARS.

Tashfeen Malik, who with her husband carried out the massacre in San Bernardino, Calif., passed three background checks by American immigration officials as she moved to the United States from Pakistan. None uncovered what Ms. Malik had made little effort to hide — that she talked openly on social media about her views on violent jihad.

She said she supported it. And she said she wanted to be a part of it.

Had the authorities found the posts years ago, they might have kept her out of the country. But immigration officials do not routinely review social media as part of their background checks, and there is a debate inside the Department of Homeland Security over whether it is even appropriate to do so.

Ummm WHAT??!! Its not appropriate to review a would be immigrant to this country’s social media profile to determine if they are truly on the up and up??!! Why the hell not??!! Oh wait – perhaps its because:

“During that time period immigration officials were not allowed to use or review social media as part of the screening process,” John Cohen, a former acting under-secretary at DHS for intelligence and analysis. Cohen is now a national security consultant for ABC News.

WOW. All because someone’s feeling might get all stepped on or something?? All because of “bad public relations??” Are you for REAL?! Yes, I’m pretty much yelling at my computer as I type this. 14 Americans are DEAD and 21 Americans were wounded by terrorists Syed Rizwan Farook and Tashfeen Malik because scrutinizing their social media activity might lead to bad PR. Unreal.

Hey Jeh Johnson? Let me show you some bad PR:

That's it, our government is run by complete idiots. https://t.co/j28vwAJFMQ

It just keeps getting better. It's as if we want an attack to happen ffs. https://t.co/UtaR9Xfp0w

Here’s a question. How many of our readers have had background checks for their jobs? How about this? How many of our readers have, or know of someone who has been in line for a security clearance?  I can tell you I’ve had and know of many who’ve dealt with both. Those background checks and scrutiny for a security clearance leave no stone unturned… well except for social media. OOPS that’s not right either. Social media use is a definite priority when looking at both!

Jobs and colleges scutinize our use of social media but the Government doesn't for entering the country? Nice! https://t.co/kM7zfeAzOz

Yep pretty much! Every square inch of our lives is totally vetted if we want a job or a security clearance and NO ONE worries about hurt feelings or bad PR. Oh wait the exceptions to that rule are the would-be immigrant with past and present terrorist leanings.

Thanks guys, I’m sure, absolutely SURE that the families of the 14 Americans killed and the 21 wounded Americans really and truly appreciate the Administration’s efforts to ensure no immigrant’s, terrorist or otherwise, civil liberties are besmirched and all PR is super duper good. NOT.