Next post
#WhereIsPutin? The Search Continues on the Internet

While President Obama excused himself from meeting with Israeli Prime Minister Benjamin Netanyahu earlier this month on the high-minded grounds that “. . . our general policy is, we don’t meet with any world leader two weeks before their election. . .”, a bipartisan Senate panel is probing whether the Obama administration’s tentacles have reached into that same upcoming Israeli election. 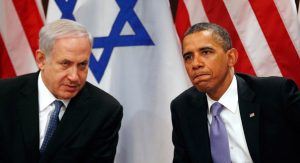 The Senate Permanent Subcommittee on Investigations is delving into the Washington-based nonprofit “OneVoice Movement,” and its links to an anti-Netanyahu Israeli group “Victory 15” (V15). OneVoice, which describes itself as an “international grassroots movement that amplifies the voice of mainstream Israelis and Palestinians, empowering them to propel their elected representatives toward the two-state solution,” was run until November, 2014, by Marc Ginsberg, whose Democratic bona fides include serving the Carter administration as a Middle East advisor, and the Clinton administration as ambassador to Morocco.  Also in November, OneVoice was given $350,000 in State Department grants intended for Palestinian grassroots activism and Palestinian-Israeli peace talks.

Sounds so. . . humanitarian, right? Hold on — in January of this year, OneVoice announced its partnership with V15, which is committed to removing Netanyahu. At the same time V15 also gained the directorship of Jeremy Bird, who served as Obama’s deputy national campaign director in 2008, and national campaign director in 2012. Accompanying Bird to his new post in Israel with V15 were former Obama campaign operatives tasked with the goal of knocking on 1 million Israeli doors to achieve the ouster of Netanyahu.

OneVoice has declared that it is innocent of directly interfering with the Israeli elections, as doing so would threaten its tax-exempt status as a nonprofit. Spokesman Payton Knopf asserted that “OneVoice is eager to cooperate with any inquiry. And after a fair examination, we are confident no wrong doing will be found.”

Ah, but the devil, as is said, is found in those pesky details. In its 2014 annual report, OneVoice wrote that its Israeli branch would be “embarking on a groundbreaking campaign around the Israeli elections.” Furthermore, both groups have used adjacent offices in Tel Aviv.

If you are smelling something fishy here, you’re not alone. Netanyahu posted on his Facebook page on Friday, “Left-wing and media elements in Israel and abroad have conspired to bring [Zionist Union leaders Isaac Herzog and Tzipi Livni] to power illegitimately, by means of slander at home and unprecedented money from abroad.” He continued,

“The goal of Mozes (an Israeli newspaper publisher) is to bring about the rise of the left. He is joined by left-wing elements in Israel and abroad who are streaming tens of millions of dollars to NGOs running an ‘Anyone but Bibi’ campaign in its various guises.”

“Those NGOs are encouraging higher voter turnout among the Arab population and left-wing voters, including by means of a grassroots campaign going from door to door.”

The aforementioned Senate subcommittee has its suspicions as well, which are strong enough to include both Democrats as well as Republicans in the investigation. Chairing the committee is Sen. Rob Portman, Republican from Ohio. Senate Republicans on the subcommittee include Rand Paul (KY), John McCain (AZ), James Lankford (OK), Kelly Ayotte (NH), and Ben Sasse (NE). Senate Democrats include Jon Tester (NV), Tammy Baldwin (WI), Heidi Heitkamp (ND), and Claire McCaskill (MO).

It may be too late for Netanyahu. Latest polls show his Likud party lagging behind his more left-leaning rivals in the Zionist Union party. But while Obama will be doing his Happy Dance if Netanyahu is defeated in Tuesday’s election, Americans should be disgusted with the machinations which may have been taken by this administration to bring about Bibi’s downfall.

Oh, but Obama doesn’t want to ‘interfere’ with the upcoming election. And if you believe that, may I interest you in some swampland in the Negev?