Sasha and Malia Obama Have Nothing in Common With Military Children

Sasha and Malia Obama Have Nothing in Common With Military Children

by Cassy Fiano in military 17 Comments 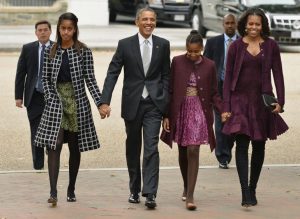 For military spouses, one of the most well-known websites intended to be a place for support is SpouseBuzz. An offshoot of Military.com, SpouseBuzz covers a variety of military-related topics. But one of their latest offerings was a swing, and a huge miss. Army wife Rebekah Sanderlin wrote a column explaining how Sasha and Malia Obama are just like military kids everywhere.

9. Their dad (and mom!) frequently have to travel for work.
8. Both of their parents are under a lot of stress.
7. They probably don’t know how to answer when people ask them where they’re from.
6. Their dad does a dangerous job.
5. They had to beg to get a dog.
4. Many of those countries on the map have personal significance for them, because their parents have been there.
3. It doesn’t surprise them to see people in uniform.
2. They live in government housing.
1. They are spoiled with heroism.

Unsurprisingly, the reaction was less than supportive. Readers demanded a retraction. The comment section was filled with angry replies — so much so that the editors at SpouseBuzz closed the post to new comments. And really, it’s not all that surprising. Because, let’s be honest: Sasha and Malia Obama have absolutely nothing in common with military kids. Most of the items on this list are not just ridiculous, but are also extremely insulting to military families.

Take the idea that the Obamas travel a lot and are under a lot of stress. Yes, it must be really, really dangerous when Obama goes to all of those pristine golf courses in Hawaii and the Hamptons. And it must be such a hardship for the Obama girls to go on expensive, taxpayer-funded vacations to dreary, awful places like Hawaii, Martha’s Vineyard, Paris, Africa, Ireland, and China. That’s totally just like military kids, who get to travel to places like Fort Hood in Texas, or the stunning Camp Lejeune in North Carolina. Hey, if military kids are really lucky, maybe they can get sent to live in the middle of nowhere, at a base like 29 Palms in California!

And sure, Obama’s job is difficult, but it hardly compares to military children who go months and months and months without seeing their military parent. And, on top of not seeing their parents for months on end, unlike the Obama girls who maybe go a few days without seeing one or both of their parents, military children are in constant fear that their parent might not come home at all. And that also makes the idea that their dad does a “dangerous” job comparable to that of a service member laughable. It isn’t exactly comparable to the idea of troops who know that just driving down an Afghan street could mean death or disfigurement, and it’s insulting to compare the two — especially considering that Obama never served in the military, and has a 24/7 cadre of Secret Service agents dedicated to keeping him safe. Military children have to live with the constant absence of their service member parent. If they’re lucky, their parent will come home physically whole, but then there’s the chance that their parent will struggle with PTSD — or worse, commit suicide. Remember, 22 veterans commit suicide every day. How many American presidents have ever killed themselves or suffered PTSD from the “stresses” of being president? Uh, zero.

Also astoundingly tone-deaf? Saying that the Obama girls lifestyle is comparable to that of military families. Sasha and Malia live in “government housing”? They live in the White House. They have an on-call chef, a maid service to wait on them hand and foot. There are cleaning and laundry services so that the Obama girls don’t have to ever lift a finger for themselves — no chores for the First Children. The White House has its very own movie screening room, a putting green, swimming pool, tennis and basketball courts, even a bowling alley. If they want to go anywhere, they get chauffeured around in armored limousines. Sasha and Malia Obama also go to an exclusive private school, Sidwell Friends, where tuition costs upwards of $20,000 a year, per child. Base housing is usually small, old and, in many cases, ridden with black mold and asbestos. Military children are stuck with either base schools or whatever public school will take them out in town. And saying that the Obama girls had to “beg” to get a dog is laughable. They wanted a dog, so they got one. Owning pets can be tricky for military families, considering that if they ever have to move outside of CONUS, there is a very good chance that they can’t take their pet with them. And then you add in the reality that bases have breed bans in place, and once again, you see that it is completely and utterly nonsensical to compare the Obama children to what military children have to endure. And let’s not forget — Barack Obama earns $400,000 a year; most military families get by at around $35,000.

It is appalling that a website dedicated to supporting military spouses and families would publish such condescending, patronizing, insulting drivel. What makes it even more tone-deaf is that April is the Month of the Military Child. During a month set aside to honor military children, a milblogger wants to make this kind of despicable comparison, and then pretend that she had no idea it would be offensive? Really?? Regardless of a person’s political affiliations, saying that the children of a sitting president have anything whatsoever in common with children whose parents deploy to war zones is ludicrous. Sasha and Malia Obama lead a charmed, privileged life. And they shouldn’t have to apologize for it — no presidential family should. They certainly didn’t invite these ludicrous comparisons, either. It was a military support website that did that, and that’s precisely what has so many military families outraged. Military families go through immense amounts of stress, hardship, and sacrifice. The Obama family lives a pampered life of luxury. It’s unfathomable that some brain-dead SpouseBuzz writer would ever find it appropriate to compare the two — and even worse, that an editor would read it and think it was good to publish.

To Rebekah Sanderlin and the editors of SpouseBuzz: you owe military families an apology.