by Katie Modesitt in Headlines 5 Comments

Remember Julia? The cartoon, faceless and fictional woman created by the Obama campaign last year to illustrate the necessity of government intervention in everyday life? Julia became the center of controversy when it was released because it illustrated two opposite views of American freedom. If you haven’t seen it, the original campaign has been taken down, but you can watch Glenn Beck tear it apart here: Glenn Beck on the Life of Julia 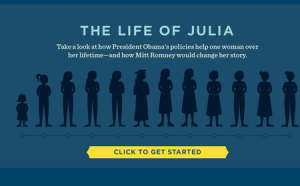 Julia is essentially dependent on the government from cradle to grave, using every program from Head Start to Medicare. On the surface, the Life of Julia has factual problems according to analyst William Bennet who points out:

“Nowhere in her fictional life is it mentioned that Head Start has done little, if anything, to improve elementary education, that she will likely graduate with $25,000 in student loan debt, that she has a 50% chance of being unemployed or underemployed after college, that Medicare and Social Security are headed toward insolvency, and that her share of the national debt is $50,000 and growing.”

But despite these obvious oversights, the Life of Julia represents a much deeper, more profound problem in the way American Liberals think. The idea that women living in America can’t manage their own education, health and reproductive needs without government help (literally every step of the way) is really pretty insulting if you think about it. Julia’s only relationship is with the state. There is no mention of a family, a church or a community that Julia belongs to. The government is all she needs.

This serves as a microcosm of the backwards thinking of the current Democratic Party and especially with Obama-backers. The misguided idea is that “freedom” is the right to live your life with the help of the state to the extent that you demand and depend on government help. That is contrary to the ideals that our country was founded on. We all have been given the tools needed for success, and they are not free preschool programs or free birth control. They are limited government, individual rights, the rule of law, property rights and free enterprise. We’ve been born into a country where we are able to prosper and form a sense of community independent from our relationship with the state. Our ideal American life is not the Life of Julia.

I hadn’t thought about Julia for a while, until I saw an interview on Fox News that asked the very question I asked at the beginning of this post: “Remember Julia?” However, the interview was about an organization that seeks to rewrite the Life of Julia and inspire women, specifically in the Hispanic community, to be self-reliant instead of relying on handouts. The organization is a breath of fresh air. It advocates for a market-based approach to immigration in which people coming into the country learn about the system of free enterprise in order to take advantage of the American dream.

This presents us with a different view of immigration. Instead of becoming another empty hand demanding government assistance, the American immigrant is empowered to contribute to society and to take advantage of our economic system. They are no longer defined by their relationship with the state, therefore they do not live the Life of Julia. Because, guess what? Not everyone can live the Life of Julia. First, because it usually does not work in the fictionalized way Julia’s life turned out, and second, because we simply can’t afford (and we don’t want) a bloated, expensive and inefficient bureaucracy set up to give people handouts.

In addition, this also presents us with a different view of the American woman, and especially the American woman belonging to a minority. Being a young woman and a Republican is difficult because people, for some demented reason, think that being a young woman in America demands government help. We have a chance here to rewrite this story and assert that being a successful woman is not living a life dependent on the state.