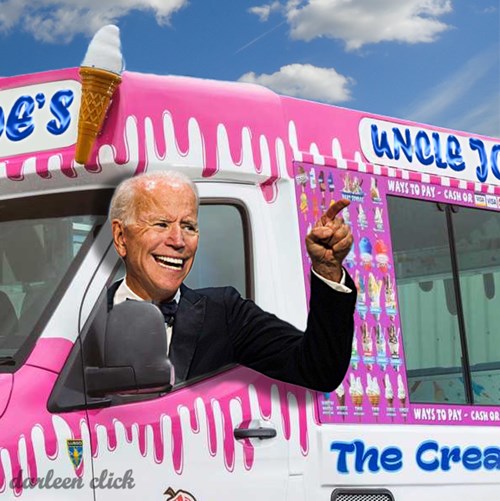 There were a bunch of hurt feelings yesterday when reporters were suddenly ushered from a meeting between Joe Biden and British Prime Minister, Boris Johnson in the Oval Office.

Was he falling asleep? One can see the glazed look of confusion on Resident Joe’s face after what seemed like a sudden movement and transition. Or…perhaps it was a look of sweet relief? We know our President does not like answering the hard questions. Take a look:

Biden and Johnson each delivered brief remarks in the Oval Office. Johnson granted questions to two British reporters, who asked about the case of Harry Dunn and trade. White House aides then ushered reporters out of the Oval Office before Biden could, well, screw up too much.

CBS News’ Ed O’Keefe managed to shout out a question regarding the “situation at the southern border” to which Biden appeared to respond with “violence is not justified”. That was all he said when all hell broke loose..or so it seems. Shouting ensued, reporters started scattering about. It may have been a bit humorous if The Benny Hill theme song were played as reporters milled and rushed about out the door. Except, to some, it wasn’t funny at all. It was alarming and embarrassing, according to some.

I couldn’t help but to muse: how can this be? The same doting press pool who had nothing but contempt for Donald Trump’s demeanor and comebacks is now getting booted out of a meeting with the “kinder, gentler President” rendering them unable to do their jobs and ask the tough questions? Say it isn’t so!

The reporters filed a formal complaint with Press Secretary, Jen Psaki after no American reporters were recognized for questions. According to this, they marched into her office and asked for a press conference as a compensation for what happened, but Psaki responded by saying that Biden “takes questions several times a week”.

Nothing to see here. It just wasn’t Joe’s time of week to answer questions. Joe just did his time for his UN Speech and that was that. It was a long day for President Pudding Cup. We can only suppose that his aides decided that, given the skepticism on Biden’s mental acuity, perhaps questions from reporters would yield some unfavorable responses. Best to do some damage control and boot the reporters out.

Joe Biden then signaled it was time for the press to leave, without taking questions from his own press corps.”-Steven Portnoy

Yep, “violence is not justified”, was Biden’s answer. Followed by a few hand gestures ushering the press corps out the door. Confusing? Perplexing? Yes and yes.

Surprising? Not in the least bit. But now, the reporters have a sad. Even WaPo‘s Ashley Parker:

Worth noting that Biden ran for office promising to restore democracy after 4 years of Trump. But today it was the British leader, NOT the American one, who spotlighted a key tenet of a flourishing democracy — respect for a free press — by taking questions from his press corps.

So much for Parker’s commentary salivating over Biden’s “calling cards” of competence and compassion a few weeks back. That didn’t age well, now did it? Nope. No compassion for the free press today. Go home, GTFO. Joe just heard the ice cream truck.

But alas, there are also people who will defend this craziness:

Happens all the time, when important world leaders meet to discuss, 1st there’s photo op with press then few questions by press allowed. Then comes down to business talks: it’s possible that PM Johnson was eager to start serious talks, but must be kept very secret from press!👀

Yeah, that’s it. Joe was just in a hurry to get right down to business with Boris. Mr. Biden had no need or patience for any questions from the reporters in The Oval Office yesterday. I mean, he has spent months upon months rehearsing for the UN speech he managed to muddle through yesterday morning. The oh-so-generic UN speech that did not even come close to addressing any current international failures. Rehearsing is hard. And reporters expected Joe Biden to actually answer questions after all of this?

Reciting a speech written and created for you on the international stage is hard work, folks. Biden was ready for his footed jammies, a cup of hot cocoa and Matlock reruns. A mess in Afghanistan? Time’s up, reporters of the free world. Chaos at the border that VP Kamala was supposed to head off before it became the “deeply troubling” (as she said) tragedy that it has become? Better luck with that question next time.

Instead of continuing to fight the wars of the past, we must answer the challenges of our collective future. America will lead the world to a more peaceful and prosperous future for all of us. pic.twitter.com/S3D1SH31UD

Except there were no answers yesterday. Bets are the doting reporters, who will lick their wounds and continue to act as battered spouses…returning for more. To be continued.