Next post
What is So Feminist About Binge Drinking?

Former WW 2 fighter pilot William “Bill” Overstreet Jr., famous for flying under the Eiffel Tower while chasing a German aircraft during World War II has died at the age of 92.

He was like many of those from his generation, simply great.

As we mentioned above, Captain Overstreet is best remembered for being the utter badass U.S. Army Air Corps pilot who  flew underneath the Eiffel Tower’s arches in his P-51 Mustang “Berlin Express” during an aerial battle while chasing a German fighter plane, which he shot down. It was like something out of an epic action movie and may have looked like this artist’s rendition: 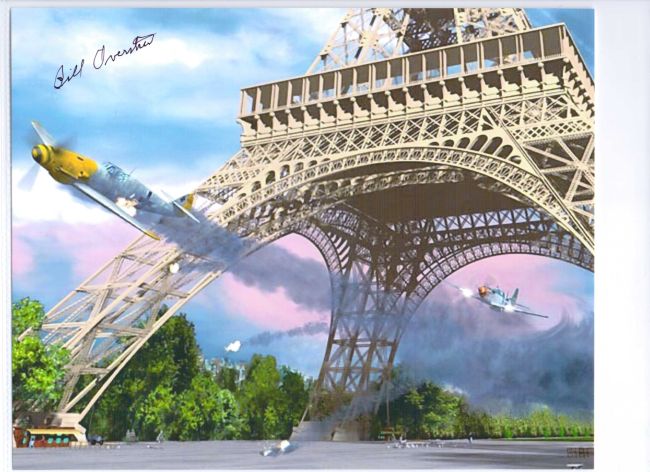 According to Barnstormers, as Overstreet was in hot pursuit of a Messerschmitt Bf 109 over Paris, the German pilot figured the anti-aircraft artillery on the ground would take care of the American, but no. Here’s what happened next:

The German’s engine was hit, and Overstreet persisted through the intense enemy flak. As a last resort, the ME109 pilot aimed his aircraft at the Eiffel Tower and in a breathtaking maneuver, flew beneath it. The unshakeable Overstreet followed, and scored several more hits in the process.

The German plane crashed and Bill escaped the heavy flak around Paris by flying low and full throttle over the river.

Overstreet describes the heroic event in his own words:

“I had followed this 109 from the bombers when most of the German fighters left. We had a running dogfight and I got some hits about 1500 feet. He then led me over Paris where many guns were aimed at me. As soon as he was disabled, I ducked down just over the river and followed the river until I was away from Paris.”

Even back in war-torn, Nazi-occupied Paris, what Captain Overstreet did wasn’t something you saw every day. Or ever actually. And it was an act that is said to have re-ignited the spirits of the French resistance fighters who witnessed it from the ground.

Balls. Captain Overstreet had them.

Over the years, Captain Overstreet was awarded hundreds of medals for his service in the 357th squadron of the U.S. Army Air Forces including France’s Legion of Honor from the French ambassador to the United States in 2009 at the National D-Day Memorial in Bedford. At the ceremony, the French ambassador said Overstreet led “some of the most heroic actions that we have ever heard of” during the liberation of France.

The website Warbirds Express has a pretty comprehensive summary of Capt. Overstreet’s life and military career.  There’s just so much more about him that you should know.

Godspeed, Sir. You were magnificent.


Our “Great Weekend Blog Reading Links!” are below the fold!

Teach at Pirate’s Cove is blogging about more failures of Obamacare in “UK Guardian Fascist Wonders If Aussie Papers Should Give Platforms To Skeptics”. 🙂

The Other McCain has many good blog posts up including this one by Stacy on “Bill Schmalfeldt’s Clown Show, and a Certain Dog That Has Not Barked”.

Phineas at Sister Toldjah has up this post on “#Obamacare Follies: Calorie info on all vending machines”.

Our friend, Leslie Eastman at Legal Insurrection has up this terrific post today on “Could 2014 be the “Year of the Tea Party Democrat”? It’s a must read.

V the K at Gay Patriot has up this blog post called “Global Warming and the Endumbening of the Left”.

Glenn Reynolds or Instapundit has many great posts at his blog hub from all over the blogosphere so go check them out! And you can read an excerpt of Glenn’s new book “The New School: How the Information Age Will Save American Education From Itself”, here.

Dana at The First Street Journal has up a great post called “A dangerous development”.

As always, Michelle Obama’s Mirror has up this great post ““Shrugging It Off”– It’s a Game of the Throne”.

Jammie at Jammie Wearing Fools has up this post “Australian Taxpayers on the Hook for $400,000 for Rescuing Climate Clowns From Antarctica”.

Jonn at This Ain’t Hell has this post up called “ISIS takes back Fallujah and Ramadi”. I guess it was only a matter of time. 🙁

LongTabSigO at Blackfive has up a great post called “Enlisted – The new comedy on Fox…”. Make sure you read the comments.

Alberto at Babalu Blog has up this post “Cuba: Castro State Security violently raids homes of dissidents and confiscates toys destined for underprivileged children”. Go check it out!

Neo at Neo-Neocon has up this post “Customer “service” in the Obamacare era”. It’s just great so go read it.

and finally, Ace at AoSHQ has up this post on “Chris Hayes: Why These Heartless Right-Wingers Are Laughing At the Plight of Those Brave Climate Researchers Who Risked Their Lives to Save the World!” 🙂