Next post
Hunter Goes On Vacation With Joe And Jill 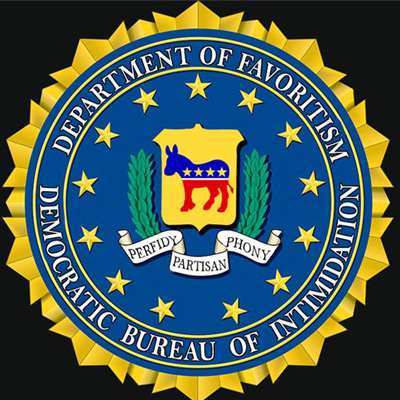 The impartiality of Bruce Reinhart, the judge who signed off on the Mar-a-Lago raid, is beginning to collapse. On Tuesday, Nina told us about Reinhart’s ties to the infamous Jeffrey Epstein. Now we learn that he previously recused himself from a lawsuit Trump brought against Hillary Clinton.

On June 22, U.S. Magistrate Judge Bruce W. Reinhart of West Palm Beach, FL, filed his recusal, citing a law which requires judges to be impartial. Donald Trump had brought a lawsuit against Hillary Clinton and other Democrats stemming from the Russian collusion scandal. Reinhart presided the start of the litigation, but then withdrew, writing in his order:

“The undersigned Magistrate Judge, to whom the above-styled cause has been assigned, hereby recuses himself and refers the case to the Clerk of Court for reassignment pursuant to 28 U.S.C. § 455.”

The statute that the judge cited says, in part, that a judge “… shall disqualify himself in any proceeding in which his impartiality might reasonably be questioned …” The statute continues by describing such concerns, including “a personal bias or prejudice concerning a party, or personal knowledge of disputed evidentiary facts.” Reinhart’s order, however, did not specify his conflict with Trump v. Clinton.

Here is the recusal. 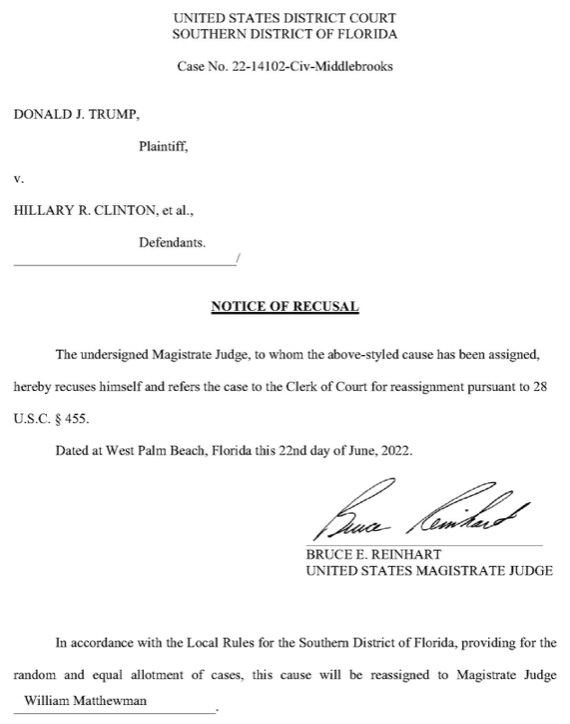 So why did Reinhart sign off on the lawsuit? Did he work for the Clintons in any way? Or would he hold personal bias that would prevent him from impartially presiding over the lawsuit? Moreover, why did he change his tune just weeks later and issue the warrant for the raid on Trump’s home?

The Judge’s Past is Catching Up With Him

Bottom line here is this: Judge Bruce Reinhart has progressive convictions, and has posted them liberally on social media. And as we know, the internet is forever.

For example, he shared a post from a Facebook group called “WokeFolks,” which included this video explaining privilege:

He also posted at Facebook in 2017 his disgust that New York was not progressive enough on criminal justice reform, as well as showing his disdain for the South with this comment:

“It’s embarrassing to live in a state that is less enlightened on criminal justice than Louisiana and Mississippi.”

On top of that, Reinhart defended IRS agent Lois Lerner during that scandal by blaming “incompetence” and an antiquated computer system for destruction of emails.

Watch the mental gymnastics that Bruce Reinhart (judge who signed off on Mar-a-Lago warrant) goes through to defend Lois Lerner deleting two years of emails during the IRS scandal. pic.twitter.com/AOva9wnVF4

But the most damning of his social media comments involve his utter contempt for Donald Trump. In January, 2017, Reinhart posted at Facebook how he took his son to the Edmund Pettus bridge in Selma, AL, since he greatly admired the late Rep. John Lewis. But he couldn’t help expressing his disgust for Trump, writing:

“John Lewis is the conscience of America. Donald Trump doesn’t have the moral stature to kiss John Lewis’s feet.”

This is obviously a judge who is quite the progressive partisan, and moreover hated the man whose home he authorized to be raided. Yet six weeks earlier he recused himself from a lawsuit involving the same man.

Rep. Victoria Spartz (R-IN) likened the FBI raid that Reinhart authorized to KBG tactics of the former Soviet Union. And Spartz should know — she grew up in Ukraine when it was still part of the USSR.

Spartz met with Trump on Tuesday evening, and afterwards said in an email:

“As a US Congresswoman who grew up in the USSR, the FBI raid of President Trump’s home is alarming. It is reminiscent of KGB-style tactics.”

“Regardless of people’s feelings about President Trump, this should not be acceptable in a democratic society.”

Spartz is right: you don’t have to be a Trump supporter to understand that the raid on his home was egregious. I’m not, and have never been, a fervent supporter of the former president. Yet I also am firm in my belief that this breach of Trump’s private property was executed sheerly for political reasons. Even former federal prosecutor Harry Litman, a progressive, said the quiet part out loud — that the goal of the Justice Department is to end Trump’s political career:

“So this could be the whole enchilada in terms of DOJ resolution.”

This was something that should’ve never happened in the United States.

Meanwhile, it’s also curious as to why Judge Bruce Reinhart recused himself from one lawsuit involving Trump in June, yet in August signed the warrant that allowed the FBI to raid Mar-a-Lago. Once again, it’s the things that make you go hmmm.